In The Halo Effect … and the Eight Other Business Delusions That Deceive Managers, Phil Rosenzweig tears into some of the most popular business books of recent years, including the bestsellers In Search of Excellence and Good to Great. Along the way, he argues that many of the pat principles bandied about in the business world are based on misguided thinking and flimsy research.

While there are plenty of books that promise the keys to business success, Rosenzweig advises managers to retain a healthy dose of skepticism while reading them. “Some of the biggest business blockbusters of recent years contain not one or two, but several delusions,” he writes. “For all their claims of scientific rigor, for all their lengthy descriptions of apparently solid and careful research, they operate mainly at the level of storytelling. They offer tales of inspiration that we find comforting and satisfying, but they’re based on shaky thinking.”

Rosenzweig, who earned his PhD from Wharton and spent six years on the faculty at Harvard Business School, is now a professor at IMD in Lausanne, Switzerland, where he works with companies on issues of strategy and organization.

Most management books, he says, focus on the question, “What leads to high performance?” But he asks a different question: “Why is it so hard to understand high performance?” To get at the answer, The Halo Effect focuses on nine “delusions” that Rosenzweig claims wrongly influence business thinking — including one for which the book is named, the halo effect. A company’s performance creates a halo, either good or bad, that influences the way the firm is perceived, he notes. When a company is performing well — sales are brisk, the stock is rising — people are quick to conclude that the firm has visionary leaders, a superb strategy and a corporate culture that brings out the best in employees. When performance goes down, the company’s leaders are suddenly seen as arrogant, their strategy is perceived to be too risky and the corporate culture is stifling.

“In fact, many things we commonly claim drive company performance are simply attributes based on prior performance,” Rosenzweig writes.

To illustrate the halo effect, he tells the story of Cisco Systems, a company that ranks as one of the highest performers of all time. As Cisco, under the guidance of CEO John Chambers, took off amid the Internet explosion, glowing reviews started popping up in the popular and business press. According to a 1997 article in Wired, the company was filled with “shiny, happy people …. Nobody has this much fun going to work.” BusinessWeek called Cisco a “high tech whiz” and credited its success to “Chambers’ seemingly flawless management, slick salesmanship and a scorching series of acquisitions.”

Now flash forward to 2000, when tech stocks began to slide. Cisco’s stock plummeted from a peak of $80 a share in April 2000 to $14 a year later, and thousands of its employees were laid off. According to Rosenzweig, “more than $400 billion in market capitalization had vanished in 12 months.” So what did the scribes have to say about all that? Some of the very magazines that not so long ago had gushed over Cisco now told scathing tales. Fortune declared that “Cisco made its own mess,” noting that “acquisitions, forecasting, technology, and yes, senior management have all failed Cisco in the past year.” The company was “basking in a culture of confidence.”

Could Cisco’s leadership, corporate culture and business strategy really have changed so dramatically so quickly? Rosenzweig says “no” and suggests that the conflicting stories about Cisco were merely a result of the halo effect. The business world, he adds, is full of other examples of the halo effect, including companies such as ABB and IBM, and media darlings Google and Starbucks. Oft-quoted surveys, such as Fortune’s annual “World’s Most Admired Companies,” are heavily influenced by the halo effect, he notes.

Rosenzweig offers equally convincing arguments to knock down other delusions that he says fill bestsellers and articles in the popular press. For one, there’s “the delusion of correlation and causality” — the mistaken idea that one thing leads to another.

Take his example of employee satisfaction and company performance. Using even an objective measure, such as the employee turnover rate, might lead to the conclusion that companies with stable workforces tend to perform well. But it’s just as possible, Rosenzweig says, that high performance leads to low employee turnover. Perhaps companies that are on the move are able to offer stimulating work environments and opportunities for advancement — reasons for employees to stay put.

Likewise, the “delusion of single explanations” can lead to erroneous assumptions about what drives business success. There are studies, for instance, showing that a single factor, such as corporate culture, customer focus or a company’s commitment to social responsibility, can lead to high performance. But in fact, many factors are inter-related, which means that any given one has a much smaller influence on the bottom line than a study’s conclusion indicates.

Then there’s the “delusion of rigorous research,” which, according to Rosenzweig, is rife in the business world. Faulty research leading to suspect findings taint many of the mega hits that managers love to quote, he says. The 1982 bestseller, In Search of Excellence: Lessons from America’s Best-Run Companies, “was a refreshing challenge to the old-fashioned model of command and control management,” but that doesn’t mean its advice was sound. He explains why the “eight practices” of America’s best companies detailed in the book — principles such as “stick to [your] knitting,” “productivity through people” and “simple form, lean staff” — should not necessarily be accepted as gospel. He also went back to see how the 35 companies featured in the book fared in the long haul, using the Compustat database run by Standard & Poor’s. What he found was not impressive; most of the companies had not kept pace with the growth of the market. “Most of the companies weren’t even average, never mind excellent,” he concluded.

Similarly, managers may be intrigued by the appealing concept of hedgehogs and foxes used in the 2001 hit Good to Great: Why Some Companies Make the Leap … and Others Don’t. The book makes the case that, among other things, successful companies are like hedgehogs: They have a narrow focus and go after it with incredible discipline. Fox-like companies, in contrast, are less successful because they scatter their attention and energy and are prone to changing direction. Rosenzweig suggests that all that talk of foxes and hedgehogs may be plain hogwash because the book’s author used questionable research methods to figure out why some “good” companies went on to greatness while other good companies didn’t.

“If you start by selecting companies based on outcome, and then gather data by conducting retrospective interviews and collecting articles from the business press, you’re not likely to discover what led some companies to become Great. You’ll mainly catch the glow from the Halo Effect,” he writes. So if there’s so much bad, oversimplified information out there, is there anything that managers can believe? Are there any pearls of wisdom that will, in fact, increase the odds of business success?

Rosenzweig does offer some suggestions, although they aren’t boiled down to memorable buzzwords or catchy phrases. For starters, he says, managers need to understand that success is relative, not absolute. A company’s performance can get better and fall behind at the same time when viewed in the context of the larger marketplace. “Competitors imitate and advantages erode,” he says. “Even good business decisions sometimes turn out badly — which doesn’t mean they were mistakes or blunders. The practices that work at one company won’t have quite the same effect at another.”

He also reminds his readers that for most companies, success is rarely a constant. Think back to Cisco, which went from being one of the hottest companies around to one in trouble.  As it happened, the company’s fortunes began to look up again in 2003 and a BusinessWeek cover proclaimed “Cisco’s Comeback.”

“Success rarely lasts as long as we’d like. For the most part, long-term success is a delusion based on selection after the fact,” Rosenzweig says. Even companies that have been held up as examples of what to do right don’t necessarily have winning track records in the long run.

His practical advice may not propel him to the bestseller list, but it may get at least some managers to take a harder look at some of the most heavily promoted business books before they shell out $30 for the next “formula for success.” 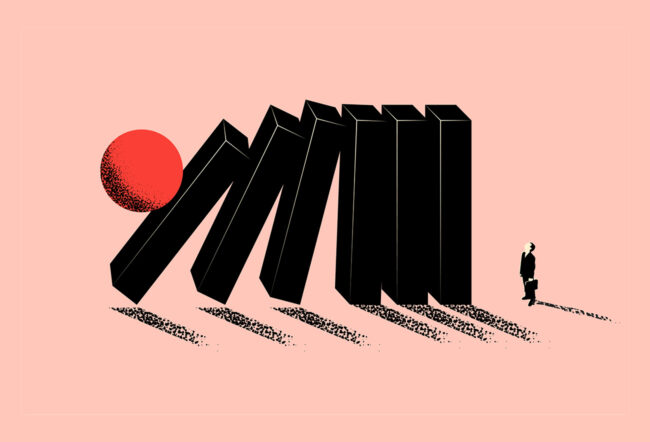