The Damascus Securities Exchange: An Emblem for Syria’s Economic Reform 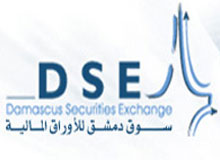 The Damascus Securities Exchange (DSE) has gotten off to a flying start since it was launched in March 2009 with six companies listed. Consider the performance of the DWX all-share index since inception on January 1: The Syrian market has risen 12.6% since the beginning of the year, versus a 1.3% rise in Amman, Jordan, a flat performance in neighboring Beirut, Lebanon, and a drop of 3.6% in Dubai, part of the United Arab Emirates. Indeed, the leading DSE indicator has outperformed all others in the Middle East region.

The year-old exchange’s efforts to woo companies and investors are only just beginning. Today, 14 stocks are listed, worth a total $1.2 billion. Ten are banks and insurers; the others are in the logistics, media, food and agricultural sectors. Trading takes place from 10:30 a.m. to 1:00 p.m., Monday, Tuesday and Thursday. Trading volumes are low, at around $1 million per session. In a move designed to foster stability, the Syrian Commission for Financial Markets has kept a tight grip on share trading: Daily share movements are limited to 2%, for example, and investors cannot deal in a single stock more than once a day.

The DSE isn’t Syria’s first stab at a stock exchange. For centuries, enterprises have been bought and sold, informally and unregulated, in cafes in what is today the old quarter of Damascus. And more recently, Syria operated an active stock market, with as many as 100 stocks listed. When economic nationalization arrived in the 1950s, that exchange disappeared. Bassel Hamwi, deputy chairman and general manager of Bank Audi Syria, and a former DSE board member, points out that re-establishing a Damascus exchange has been a "key strategic goal of the whole economic team of the country since 2000," when Bashar al-Asad took over from his father as Syria’s president.

Embracing economic reform has been a new direction for the Syrian president. In past decades, the country has been largely closed. Soon after taking office, the younger al-Asad, an ophthalmologist by training, began the process of pushing through reforms in efforts to shake up the economy and attract foreign direct investment. Among other things, Damascus has strengthened the financial sector by allowing private-sector banks to set up shop, and by establishing the DSE. "The Syrian government is very obviously taking a lot of steps to create a capital market and invite foreigners to invest in the country," says David Grayson, a partner at Auerbach Grayson, a New York stock broker that specializes in frontier emerging markets.

Part of the engine for the growth of business is the newfound interest in Syria by investors in the Gulf countries. Land along the Mediterranean coast, from Tartus northward, is being gobbled up by Gulf money, raising the price of real estate, which in Syria has been historically low. Adding to the inflation of real estate, as well as other prices, are well-to-do Iraqis who have escaped the violence in their home country by purchasing real estate in Damascus. And recently, Saudi Prince Al-Waleed bin Talal, who has broad-based investments in the West, has built a five-star Four Seasons Hotel in Damascus.

To inject growth into the economy, the Syrian government has announced an ambitious plan to invest $50 billion in infrastructure in the coming ten years –including roads, airports, ports and more. To facilitate the investments, the government has already pushed through new legislation on public-private partnerships. Imad Alfadel, general manager of the family-owned industrial conglomerate Alfadel Group, says: "The government has set a clear plan to open up. [It is] aware of what needs to be done."

But along the way, there are plenty of challenges. Regional unrest is among them. According to Haytham Joud, chairman of Damascus-based real estate and industrial firm Souria, "The political situation in the region is not helping to make this reform as smooth as possible, because of the wars in Gaza, in Iraq, in Lebanon, and the continuing threat of conflict with Israel." In 2005, the U.S. imposed economic sanctions against Syria, following the assassination of former Lebanese Prime Minister Rafik Hariri in Beirut. Still, Joud says, "the government is definitely going towards the process of reforming, and this reform is a journey and can’t be done quickly. You need a long-term process, and reforms need local support as well as international alignment."

That alignment may be on the way. Last February, U.S. President Barack Obama nominated the first American ambassador to Syria in five years — seen by some as a signal that economic sanctions may also be eased in the not-too-distant future. In the long term, Syria expects these reforms to ease the country’s dependence on dwindling oil reserves, as well as to lower unemployment. Still, it remains unclear for the time being whether al-Asad can reach his economic ambitions without reforming the country’s authoritarian political system.

The DSE’s building, a short ride from the old town of Damascus, serves in some ways as a metaphor for Syria’s economic reform. The DSE has overhauled the 1970s-era building, previously home to Syria’s Securities and Exchange Commission, at a cost of some $1 million. Inside, it is sophisticated but not overly so; it is modern, with a very discreet Arabic accent. Aside from the board, the DSE’s 60-odd staffers are youthful, and, like many working at firms around Damascus, they are well educated and professional. And, unlike some countries in the Gulf region, they are local.

The trading floor, in a former lecture theater, is quiet. A large bright screen displays all stocks. (The exchange uses an IT platform developed by Market Evolution Software Products, headquartered in the Bahamas; the DSE’s plan to use a platform developed by Nordic bourse operator OMX was thwarted by sanctions after the U.S. technology exchange, Nasdaq, acquired OMX in 2007.) The DSE has two market segments: The main market and the growth market, itself split into two. Each segment has different requirements for minimum number of shareholders, minimum capital and free float. Of the fourteen companies listed currently, eight are in the main market, and six are in the growth market.

Anas Jawish, who is responsible for the DSE’s primary market activity, expects another ten or so listings in the course of the year. He has his work cut out for him, however. "There are a lot of conditions for a company to be listed," he notes. Among them: Bringing the books up to par in privately held companies. In some cases, managers have traditionally run two sets of accounts — one for the tax authorities, and one for the owners — neither up to international standards. Complying with Syria’s corporate governance framework, which was made mandatory in 2009, is another potential headache.

For now, those listed on the DSE are subsidiaries of foreign firms, financial institutions and newly founded companies — the firms that are most likely to meet the exchange’s listing requirements. But increasingly, Jawish is turning his sights on Syria’s vast number of family-owned firms, which account for anywhere between 70% and 90% of business in the country. "The government has created cash incentives for those companies to list," according to Grayson. "Over the next couple of years, that will become quite popular." Indeed, Alfadel of Alfadel Group is a case in point. He says that, in the long term, "we would definitely consider listing some companies in the group."

Besides fostering an investment culture, the exchange must widen the net in wooing investors. Jawish confirms that overseas visitors have turned up at the exchange — Grayson visited earlier this year, for example — but staffers have not paid visits to places such as London or Zurich since regulations drafted earlier this year opened up the exchange to foreign investors. In Damascus, the institutional investor base is not large. As such, high-net-worth individuals and other Syrians are the primary investors in DSE-traded stocks. But market regulations have been drafted with institutional investors in mind — and the number of banks and brokerage houses in Damascus is taking off. "We are opening slowly," says Jawish. "It’s a new culture for [us]."

Because of congressionally passed sanctions legislation, Syria remains off-limits for U.S. investors for now. Already, though, Grayson is gearing up for growing interest in the market once restrictions are lifted, so that his mostly U.S. clients are also free to invest. When that time arrives, how will he be describing Syria to his clients? "You have a country with 20 million people that has been relatively cut off from the world, but now has a young, westernized president who is trying to change things," he says. "The growth opportunity is amazing."

The Damascus Securities Exchange: An Emblem for Syria’s Economic Reform. Knowledge@Wharton (2010, May 18). Retrieved from https://knowledge.wharton.upenn.edu/article/the-damascus-securities-exchange-an-emblem-for-syrias-economic-reform/