The Coming 'Wall' of Refinancings: A Trial for Private Equity Firms - and Their Portfolio Companies - Knowledge@Wharton

The Coming ‘Wall’ of Refinancings: A Trial for Private Equity Firms — and Their Portfolio Companies 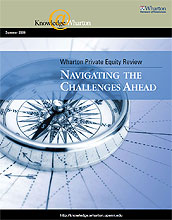 Private equity faces a difficult environment as credit markets try to absorb maturing debt from large leveraged buyouts. Panelists at the 2009 Wharton Private Equity & Venture Capital Conference, “Multiplicity Without Rhythm: Investing in Chaotic Markets,” said financial sponsors are scrambling to prepare for the refinancings that will start coming onto markets in 2012.

According to panelists who took part in a discussion titled, “Leveraged Buyouts: Strategies in Times of Turmoil,” firms are focusing hard on portfolio company operations, exploring new positions in the capital structure and considering strategic, synergistic transactions.

Jack Daly, managing director of Goldman Sachs’ principal investment area, put the crisis in historical perspective, noting that 2007 and 2008 represent sharply different markets. In 2007, the market was robust, with easy access to credit, liberal loan covenants, and the possibility of a $100 billion buyout. By the end of 2008, everything was different. “Today, we have no credit market,” he said. “Life has changed.” Buyout multiples have dropped, and deal volume is down 75% since 2007.

He pointed to an analysis by Ned Davis Research of the ratio of credit to GDP over the last 100 years. Over most of that time, the figure ranged from 140% to 160%, but it spiked to 265% before the Great Depression. It rose to the highest levels ever, more than 300%, approaching the current downturn. Returning to more natural levels will require high savings rates, inflation, or a massive markdown of bad debt, he said.

According to Garrett Moran, senior managing director at the Blackstone Group, the economy is experiencing “the mother of all recessions,” and that the stock market [early in 2009] is effectively saying that the financial sector is bankrupt. He noted that during the last big wave of private equity financing, hedge funds were flush and found it easy to leverage syndicated products. In 2006, financial sector market capitalizations had doubled from just a few years earlier. Looking forward three or four years, he said, the industry will have decreased dramatically, with hedge funds no longer leveraging deals with 90% debt levels. “All these companies will have to refinance into a much smaller market. So we’re going to see a world of distress.”

Moran referred to a “wall” of private equity bank financing that will mature in 2012 and 2013. Because of this, private equity firms must increase cash margins. Blackstone has been meeting with its portfolio company management teams and scrutinizing projections for 2009 and 2010. In order to conserve cash, some managers are closing plants and trying to sell assets, he said, but asset sales are difficult in the current environment. Blackstone is questioning whether business models and assumptions are viable even after significant cost cuts. Moran added that companies are “skinnying down,” taking a strategic look at their models. If a portfolio company’s model requires cash early on to meet the promise of opportunity later, “you have to get rid of it.”

Operational team meetings are being set to devise 100-day plans focusing on issues such as supply-chain management and sales programs. “Basically, management teams are being told to ‘bar the door. Take more severe actions,'” said Moran. One course of action, for example, is to ramp up outsourcing.

Private equity firms, Moran predicted, will experience a “slow-motion” period over the next three to four years in which firms can restructure, buy back portfolio company debt, or take other operational steps “to be all set to have handsome returns when the refinancing hits.” Some companies are approaching private equity firms about partnerships, he added, noting that Blackstone created a partnership with Bain Capital and NBC Universal to take control of the Weather Channel, with NBC as the operating partner. “When the dust settles, there will be more private equity going into corporate partnerships than corporate money going into private equity firms.”

Peter J. Clare, managing director at the Carlyle Group, predicted that credit markets would remain expensive for close to two years, suggesting it would take at least that long for the banking system to get its bad assets off the books and recapitalize.

Buddy Gumina, a partner in Apax Partners, said the changing credit picture would have a major impact on private equity portfolio companies. In the last few years, as the economy boomed, banks were eager to lend. If a borrower had a problem, the bank would fall back on relationships and cooperate with management as it worked through the difficulty. Now, he said, relationships no longer rule. “In today’s market, the reasonableness is often gone and (lenders) are instructed to push as hard as possible to extract as much value as they can.”

Private equity firms are on the defensive. Gumina said that while the firm once spent much of its time on deal generation, the emphasis now is on operations. “We have clearly shifted in a very, very organized way within the firm. We are looking at each portfolio company and questioning the business model, the cash flows, and the ability to survive.”

Gumina said Apax is preparing more than ever to take advantage of potential consolidation or investments from strategic buyers or investors, especially because it expects economic conditions to remain murky for the next 18 months. “We would rather do something today and shore up the capital structure than wait until later when there are fewer options. From a limited partner standpoint, they are looking for us to be thoughtful and creative.”

Returns are going to matter a great deal in the near future, he added, because when it is time to raise money again, limited partners will want to see how well private equity firms managed their portfolio companies during the recession. “One solution could be capital injections and also being very operationally involved in the businesses.”

Daly said he, too, is concerned about the large amount of private equity debt due to mature. “It’s unclear to me how we’re going to end up dealing with that in 2012, 2013 and 2014. It sounds like a long way away but it’s going to be here soon,” he warned.

Gumina noted that all is not “doom and gloom” in the private equity market. While buyers would like to see higher prices to help complete exit transactions, he said, at the same time prices are sharply lower for those interested in strategic acquisitions.

Regarding the risk-return ratio, Clare added, the debt market represents one of the best investment options. He suggested thinking about this market as two buckets. One is the debt of healthy companies returning 15% to 25%. The other is the debt of distressed companies that could be purchased to gain control of the business or drive it into a restructuring. Such an approach will become increasingly popular, he said, though it is still early in the process. A lack of covenants and other mechanisms that would trigger default sooner are delaying inevitable restructurings. “Given the maturities, this is going to continue for four or five years at a minimum. We’re in the top of the first inning in terms of restructuring and distressed-debt opportunities.”

Forced divestitures will also provide opportunity, he said. Major companies under pressure, such as AIG and Citigroup, will need to unload desirable businesses. “It will take a while for buyer and seller expectations to line up.” However, “the companies that become available to us will be at valuations that are more attractive.”

Moderator Curt Cornwell, a partner in transaction services at PricewaterhouseCoopers, asked the panelists which industries were particularly interesting for distressed investing.

Gumina pointed to the retail sector. He said his firm is looking at retail opportunities even though the industry was “banged up” by extremely weak [Christmas] holiday spending. “We have to be creative. There are no straightforward LBOs to be done, but there are ways we can come in to shore up the capital structure or help buy a competitor and achieve synergy. It’s an area where having a good understanding of the space will matter.”

Gumina said his firm wasn’t seeing much opportunity in the health care sector, though it is considered a defensive investment. The sharp decline in consumer spending has extended to elective procedures. Uncertainty over the future of the industry under the Obama administration also makes health care less attractive, at least in the near term. Longer-term, he added, both retail and health care will provide opportunities for creative, smart strategies because they are undergoing dramatic change and because, in past recessions, the price to acquire competitors has declined.

Cornwell asked speakers about how federal government efforts to revive the economy through the Troubled Asset Relief Program (TARP) and other stimulus programs would affect private equity. According to Clare, TARP was a good step forward, but he said confidence would be critical in restoring economic growth. “We have to stop the massive fear and panic. Massive bank failure creates fear and panic, and that’s where we were headed. The TARP may not have been the most efficient way to go about it, but those big bold steps had to be taken.”

TARP and financial stimulus programs would provide opportunities for private equity to recapitalize and revamp the nation’s financial structure, he added. “I don’t think the government can afford to do it by itself and will need to create a structure that allows private capital to come in and build up an equity base for financial institutions.” He noted, however, that the process of restructuring and selling off bad assets had not even started. “It’s a bit early to jump in, and there’s no reward to being early.”

A second opportunity will come in remaking the financial sector itself, Clare predicted. “Restructuring the industry will create opportunities for new business models that people have not thought of yet and put private equity capital behind new financial businesses.”

"The Coming ‘Wall’ of Refinancings: A Trial for Private Equity Firms — and Their Portfolio Companies." Knowledge@Wharton. The Wharton School, University of Pennsylvania, 05 August, 2009. Web. 24 June, 2021 <https://knowledge.wharton.upenn.edu/article/the-coming-wall-of-refinancings-a-trial-for-private-equity-firms-and-their-portfolio-companies/>

The Coming ‘Wall’ of Refinancings: A Trial for Private Equity Firms — and Their Portfolio Companies. Knowledge@Wharton (2009, August 05). Retrieved from https://knowledge.wharton.upenn.edu/article/the-coming-wall-of-refinancings-a-trial-for-private-equity-firms-and-their-portfolio-companies/

"The Coming ‘Wall’ of Refinancings: A Trial for Private Equity Firms — and Their Portfolio Companies" Knowledge@Wharton, August 05, 2009,
accessed June 24, 2021. https://knowledge.wharton.upenn.edu/article/the-coming-wall-of-refinancings-a-trial-for-private-equity-firms-and-their-portfolio-companies/