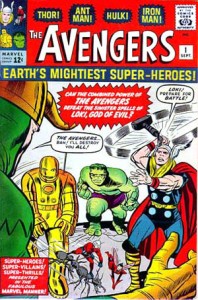 This post is by Kendall Whitehouse, Wharton’s director of new media.

Disney’s Marvel Studios has been preparing the audience for The Avengers for several years. Many of the films cited above featured extra scenes following the closing credits with Samuel L. Jackson as S.H.I.E.L.D. director Nick Fury alluding to “the Avenger Initiative.” Clark Greg’s “Agent Coulson” appears in several of the films, providing character continuity leading up to The Avengers. In Thor, there’s a brief appearance of a character played by Jeremy Renner, who is listed in the credits as Clint Barton. Fans would recognize that character as the Avengers’ Hawkeye.

All of these maneuvers may seem like typical Hollywood marketing ploys: Team up the characters from several successful films into one big event movie, build marketing teases into the earlier films and throw in a crossover character or two. But Hollywood has nothing on the comic book industry, which is a font of marketing techniques based on clever storytelling strategies. Comic books have explored — and exploited — narrative structure like no other medium. These techniques — which include such things as multi-issue story arcs, crossovers, team-ups, reboots and multiple title tie-ins to “maxi-story” series — sell more comic books, but in the process, they may have also blazed a trail for new forms of complex storytelling.

The team-up, as illustrated by The Avengers, brings together multiple superheroes in a single story. Before this weekend’s blockbuster film, The Avengers comic book — introduced by Marvel Comics in 1963 — brought together a superhero team comprising many of that company’s most popular characters. Before Marvel’s Avengers, there was DC’s Justice League of America, a superhero team-up which first appeared in 1960. And, before that, DC Comics assembled the Justice Society of America, which first appeared in 1940.

Then there is the guest appearance, or character crossover — when one superhero appears in the comic book title of another character. When Spider-Man was given his own comic in 1963, Marvel’s most popular superheroes at the time, the Fantastic Four, made a guest appearance. When introducing a new comic book, why not get fans of your most popular characters to give the issue a look? Over time, nearly every combination of superheroes has been featured in one or more cross-title stories.

Throughout the history of these narrative techniques, the story structure of comic books continuously evolved.

Early comic books typically contained short vignettes with one or more self-contained stories in a single issue. Within a few years, storylines commonly stretched across multiple issues, and by the end of the 1960s, multi-issue tales were the norm. Many of these individual techniques are found in other media, of course. For instance, movie serials and television series excel at multi-chapter storytelling. Examples of all these techniques could be cited in film, television and the written word. Yet comic books have honed and extended many of these techniques to a greater extent than most other forms.

The pinnacle of this expanding narrative form is the multi-title “event” series like DC Comics’ various “Crisis” series and Marvel Comics’ recent “Fear Itself” series. Here, the narrative extends beyond the titles in the main series, with the story spreading across additional “tie-in” titles. Marvel’s “Fear Itself” consists of a prologue comic book; a seven-issue limited series containing the core narrative; dozens of tie-in story elements in Marvel comics such as The Avengers, Hulk and Iron Man; as well as numerous “Fear Itself” one-shot titles, multiple epilogue stories and “The Fearless,” a 12-issue spin-off miniseries. To take in every aspect of this extended tale would require reading somewhere in the neighborhood of 146 individual comic books.

The story has now become a world unto its own that allows the reader to explore whichever dimensions are of the greatest interest. Follow the events from the perspective of Iron Man or Thor. Or just peruse the core series and ignore the supplementary story elements. The series presents a nearly unbounded narrative universe for the reader to experience.

It is easy to interpret this with a cynical eye as nothing more than a series of cheap marketing tactics designed to pump sales. And yet, when well executed, something larger emerges.

At the extreme edge of these techniques, such as the multi-title story events, new forms of storytelling begin to emerge. These extended series give rise to tales that can be viewed from multiple perspectives — from within a single title or across multiple titles, each with its own story arcs. Although all are contained within the form of comic books, these are techniques that are being explored in new media forms such as the transmedia storytelling, which unfolds a single narrative across multiple types of media, and alternate reality games (ARGs), which use the real world as the platform for complex storytelling.

Much of transmedia storytelling and ARGs are similarly marketing focused — using websites, Twitter feeds and real-world games to promote movies and television programs. But many observers believe these forms of storytelling will come into their own as new formats for complex, layered, multi-faceted tales.

For a more detailed discussion of this topic, see “Media Marketing and the Evolution of Narrative Structure” in Whitehouse’s blog, On Technology and Media.