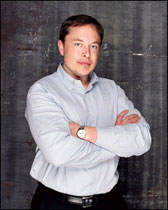 Entrepreneur Elon Musk has three passions: the Internet, space exploration and clean energy. The first paid off handsomely for him in 2002 when he sold PayPal to eBay for $1.5 billion in stock. The second is fueled by SpaceX, a company that makes space launch vehicles. Musk’s third passion is Tesla Motors, which makes the Tesla Roadster, an electric sports car that claims to go 244 miles per charge and sells for $101,500 or more. In the first of a two-part podcast with Wharton Entrepreneurial Programs and Knowledge@Wharton, Musk speaks with management professor John Paul MacDuffie, co-director of the International Motor Vehicle Program, about electric cars, hybrids, the Tesla and the mysterious ways of Detroit. For coverage of his leadership presentation, read: Harnessing the Sun and Outer Space: Elon Musk’s Sky-high Vision.

John Paul MacDuffie: Let’s start with a question about the electric car industry and then get into some Tesla-specific questions. I wonder how you see the ecosystem of the budding electric car industry. Will we see a proliferation of small firms that are innovators and competing together? Will they be complementary, or will there be a few innovators who get out ahead and a big player will snatch them up? That’s only a subset of the possible scenarios.

Elon Musk: Right. I think you’ll see the mainstream car business transition towards electric cars and you are seeing that already. The main theme of the Detroit auto show this year was electric cars. The car business is very competitive, and such businesses, I think, do respond pretty well to changes. The auto companies know that if they don’t, their competitors surely will. I think the response thus far has been slower than I’d like, but I think I can see it also gathering momentum, particularly with the strong push by the new administration — the Obama administration — in the direction of electric cars. They understand the importance of this and are essentially mandating it with increased CAFE (corporate average fuel economy) standards and subsidizing the funding for new capital developments as they relate to energy efficient cars. So I think certainly the incumbents are going to move in that direction.

Incumbents tend not to move that quickly for all the reasons that have been articulated in many books. But they are moving in that direction and that rate is going to increase. As far as new companies go, the car business is such a capital-intensive business. It doesn’t lend itself to start-ups very well. You need to operate with incredible capital efficiency if you are going to be a start-up and succeed in the car business. Tesla has done a good job in that respect, though it certainly could have done a much better job. But the capital efficiency of Tesla is quite high; we have spent less than $200 million to develop a new tire, a quite-revolutionary power train, and bring a car to market that is 93% new — which a lot of people don’t realize.

A lot of people think of the Tesla as sort of an electrified Elise [sports car]. Unfortunately with Tesla, it’s not. The Tesla Roadster has only 7% legacy components — legacy Elise components. It is a newer car than most new cars — than almost any new car, because even when someone says the new such-and-such, actually it’s not new. It’s got lots of bits and pieces that are from other prior models. In the Tesla Roadster, though, the entire power train is new from scratch and the body is totally new. The chassis was originally going to be an Elise chassis, but we ended up having to redesign the thing. In retrospect, we should have done a completely new car from scratch. It would have cost us less and resulted in a better car if we had started with a clean sheet. We had to stretch the chassis, which made the car 30% heavier. The load distribution is a little bit different.

MacDuffie: As a follow-up about that part of the process, what are some of the ways in which the Tesla team has been able to think and design their way around some of the barriers that have inhibited other electric car designs? What enabled you to get to this level?

Musk: It was obvious with the advent of lithium-ion technology that you could produce a compelling electric car. If you look at the last foray into that area — which would have been the EV1 and the RAV4 — they were based on nickel-metal hydride technology. The EV1 had a range of around 140 miles, and lithium-ion has twice the energy density of nickel-metal hydride so you could expect a car to do some 250 miles with a simple change in battery pack. My feeling is that if you could have a range comparable to that of a gasoline car, then that would be very appealing and you’d have a lot of people who would be interested in it.

Also, if you look at a movie like Who Killed the Electric Car? — the 2006 documentary — it was clear that there is a segment of the population out there that is really keen on electric cars. The EV1 had to be forcibly taken from people, and then the cars were sent to some car graveyard where they were squashed, while the customers held a candle-light vigil. Now, when was the last time you heard of someone holding a candle-light vigil for a product, let alone a General Motors product? How blind do you have to be to not realize that that is something you should be pursuing, not destroying? It’s astounding incompetence. Mind-blowing incompetence. How foolish. Where would GM be today if it had done the EV2 and EV3? I mean, they’d still be GM.

MacDuffie: Well, of course GM went kicking and screaming to do EV1 too, right? They didn’t want to do it.

Musk: They had to be forced to do EV1, yes. I think the reason they were so draconian and dragged those cars back and squashed them was they were afraid if they didn’t do that somebody would force them to do EV2. That was the reason that they did it. But I think it was astoundingly bad decision-making.

MacDuffie: Which aspect of the Tesla do you think will be the most difficult to scale? Is it production, sales or none of the above?

Musk: The hardest thing for Tesla will be to get the right people when we need them. Tesla is a very engineering and design focused company. Finding the best engineers in the world across the board — in areas such as power train, vehicle engineering, suspension handling, interior and safety — is extremely important. We’ve got a fantastic design group already, so I think we’re fine on that dimension. But our challenge is bringing together the engineering and production expertise that we need. I think we’ll do this, but in terms of what I view as the most amount of work, that’s the most amount of work. If we get those people on board then it’ll be no problem.

MacDuffie: I would guess you’re starting to get some resumes and emails. Talent must be flowing in your direction.

Musk: Yes, we have some really good people. We’ve got a good core nucleus of people. Certainly we have the best power-train engineering team in the world. There’s no one that’s even close. And we’re building up the vehicle engineering side of things and the production expertise as well.

I am quite confident about the future of Tesla at this point. The important thing that Tesla needs to focus on is getting the right people on board, and making sure we make an extremely good product. Great companies are built on great products. When the product starts to become shoddy and uncompetitive, so does the company. I know I’ve made disparaging remarks earlier about Detroit, but those are intended to encourage different behavior. I’m not simply blindly attacking them. My point is that they should focus on making great products. As soon as people associate great products with Detroit, Detroit will be healthy.

MacDuffie: I agree. Let us turn now to the difference between electric cars and hybrids. Obviously a pure electric drive train design has a lot of advantages — technical, aesthetic — over a hybrid which after all involves two different drive trains having to work together. I’m curious about how you see the role of hybrid drive trains. What are your thoughts on the co-evolution or the compatibility of hybrid and pure electric vehicles in the next 20 years?

Musk: There’s a famous quote by Wayne Gretzky, the Canadian ice hockey player: “You want to skate to where the puck is going to be.” There is, I think, a transitional role for plug-in hybrids, but it’s a fairly short transition. It will be shortened by the Tesla showing that you can address the range issue with pure electric vehicles. With the Model S we’re addressing it three ways: By offering a 300-mile range battery pack, a 45-minute charge time, and designing the pack such that it can be swapped out faster than you can fill a gas tank. That enables some ancillary businesses so maybe somebody wants to set up a battery pack swap station just as you have gas stations. You can get across the country faster than you can get cross-country in a gasoline car, so where is the range issue? There may be some infrastructural issues but we do not have a fundamental range issue.

We were looking closely at doing a plug-in hybrid at Tesla. For a brief period, the Model S was going to be a plug-in hybrid, but as we drilled deeper into the design we concluded that we could not make a compelling hybrid, or at least that the electric car would be much more compelling than the hybrid would be. When you create a hybrid, you’re designing an amphibian — and an amphibian is going to be a worse fish than a fish, and a worse mouse than a mouse or whatever creature you want to pick. We just didn’t like what we came up with. It was almost like the transition from analog to digital. For a while, you had these weird hybrid circuit boards that were quasi-digital and quasi-analog until people realized you should just go digital. Just bite the bullet. That’s the conclusion we came to. The market will decide whether we were right or wrong.