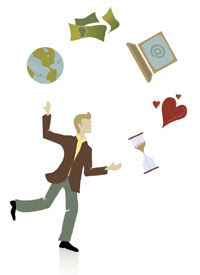 Thanks in part to the growth of mobile technology, it’s no secret that work is starting to seep into people’s home lives. But life is also seeping into the office, with an increasing number of employees setting aside a few minutes — or longer — during the workday to send personal e-mails, run errands or take a coffee break.

Those tasks were among the most mentioned in a recent survey by data protection firm Mozy. Other activities that respondents said they felt comfortable doing on company time included leaving early for doctors’ appointments or for a child’s performance at school.

The study of 1,000 employees and employers from the United States, Great Britain, Germany, France and Ireland also found that many managers are taking an increasingly relaxed attitude toward how workers structure their days, in part because the bosses assume — correctly, according to the study results — that many are putting in time outside the office to finish work tasks.

As the workday strays further from the traditional 9 a.m. to 5 p.m. structure, how do employees figure out when it’s permissible to slip in time for personal business — and determine what types of “life-related” tasks are acceptable?

“It’s a combination of factors,” says Wharton practice professor of management Stewart Friedman. “You’ve got to consider the work culture [and] the personal ethical standards and conscientiousness of the employee. The age of the employee probably has an effect as well.” But the most critical factor is the “social and political environment at work, what the expectations and assumptions are about how people are supposed to operate, and whether the emphasis is on results as opposed to how those results are achieved,” he adds.

Workers on an assembly line or in similarly regimented and location-dependent positions are limited in the amount of flexibility they have. “In the pre-Internet world and in the manufacturing-based economy, your physical presence was really the thing that mattered,” Friedman notes. “Performance management systems were created around the idea of time as the essential metric.”

That remains the traditional model and mode of thinking for many organizations, Friedman says. But he adds that managers should consider that it’s just as important for employees to be psychologically present. “It’s harder to be psychologically present when you’re distracted by the demands of other parts of your life. I think the principle to go by is that if [time for personal tasks on the job] helps you take care of things that matter to you – and that you are  responsible for in other parts of your life — an employer is going to want you to do that so long as you meet performance standards and deliver results in ways that create value for the company.”

Friedman knows of a company where employees have even been put in charge of their vacation time. Instead of earning a set number of days, “you take vacation when you need to, just in the way they trust [employees] on a daily basis to figure out when they need to check out to do other stuff.”

Moving toward a more flexible, less location-dependent method of accounting for a worker’s time requires a certain level of trust on both sides, in addition to a transparent, results-focused system to evaluate employee performance, Friedman says. “What you want are people who have a sense of responsibility for the outcomes that matter, and you engender that when you give people the authority to make decisions about when they get things done.”