Slippery Negotiations: The Give and Take of Oil Contracts in Foreign Countries - Knowledge@Wharton

Slippery Negotiations: The Give and Take of Oil Contracts in Foreign Countries 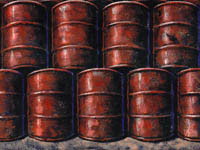 When oil prices spiraled much higher in global markets between 2003 and 2008, the governments of several oil-producing nations — including Algeria, Bolivia, China, Ecuador, Russia and Venezuela — responded by expropriating local assets of independent oil companies that had contracted to operate in their territories, or by imposing large windfall taxes on their oil output. Struck by this complex, little-understood pattern of events, Arthur van Benthem, Wharton professor of business economics and public policy, and Johannes Stroebel, professor of economics at the University of Chicago Booth School of Business, analyzed the fiscal data on 2,468 oil extraction agreements in 38 countries during that time period, in search of answers to key questions of interest to public policy makers and foreign investors alike.

What kinds of contracts between the governments of oil-rich nations and international oil companies have been the most effective in minimizing the risk that local governments would expropriate those assets? What kinds of contracts have proven to be ideal for both the local governments — who might otherwise be tempted to expropriate — and for foreign investors? What are the broader implications of these findings for public policy makers and foreign investors, not only in the oil sector but in other sectors where local governments may also be seriously tempted to expropriate foreign assets? The two researchers provide some answers to those questions in a paper titled, “Resource Extraction Contracts Under Threat of Expropriation: Theory and Evidence,” which will be published in The Review of Economics and Statistics.

The issue remains relevant in light of the recent headlines from Argentina, where Repsol, the Spanish oil giant, has filed a claim for breach of contract against the Argentine government, which last spring seized control of Repsol’s operations in that country without offering compensation to the company’s shareholders. And in Central Asia, the government of Azerbaijan threatened in mid-October to take “severe measures” against BP and its partners ExxonMobil, Statoil and Chevron for failing to meet their oil production targets from the Azeri-Chirag-Guneshli (ACG) project. Like Azerbaijan, Argentina’s government accused YPF, the Repsol subsidiary in that country, of failing to fully exploit its assets.

According to Van Benthem, these kinds of oil extraction contracts are “an extensive set of complex tax rules that specify how much the oil company will pay to the government in fees, royalties and other payments at each oil-price level.” In their research, Van Benthem and Stroebel confirmed the hypothesis that contracts that provide a “smooth” and stable stream of revenues to host governments are more likely to satisfy those governments, but are also more likely to lead to expropriations. For host governments, the ideal contract, notes Van Benthem, “is a tax contract that pays [the government] about the same amount of money at any oil price.” Under such an ideal contract, whether the price of oil jumps to $140 or plummets to $30, the local government will get the same “smooth” flow of revenues.

Why are “smooth” revenue streams important from the local government’s point of view? “Smooth contracts are useful for governments before future oil prices are known, since the government is less exposed to the enormous swings in revenues tied to volatile oil prices,” Van Benthem notes. “Such revenue swings make government planning very difficult.” For example, it is not uncommon for an African oil producing country’s government budget to be 75% or more dependent on hydrocarbon revenues. When oil prices fell in 2009, Gabon had to slash its budget by 13%, the researchers note in their paper.

Smooth contracts work well for foreign investors, too, provided “the government keeps its part of the deal” and does not go on to expropriate the assets of the foreign company, Van Benthem says. “It is important to realize that expropriations are to be expected in times when returns on investment turn out to be very high,” as in the case when oil prices soar to record heights. In such situations, local governments may feel that foreign companies are taking too high a percentage of the profits without investing enough back into the country. “It is important [for firms] to recognize this risk beforehand, when they structure their contract.”

The best balance, Van Benthem says, is to write a contract that allows the government to benefit just enough from high profits to deter it from expropriation. That way, foreign firms can still expect to earn good profits at high oil prices, and they can agree to provide the country with substantial tax revenues even if the oil price drops. Local governments will “recognize that [in the long term] it is costly for them to expropriate,” even if that seems tempting in the short term. For a contract to successfully prevent a country from seizing assets, “the short-term gains from expropriation cannot be too high relative to the various costs of expropriation,” according to Van Benthem.

One particularly salient cost of expropriation, the authors note, is the hit a country’s reputation can take when it seizes an oil firm’s assets. In their research, Van Benthem and Stroebel found that it is often harder for countries that have a reputation for being “less reluctant” to expropriate to negotiate an “ideal” contract that reduces their exposure to oil price volatility. That’s because foreign investors already know (or have good reason to fear) that such countries are willing to seize their assets. From the point of view of the government, notes Van Benthem, “the more likely you are to expropriate, the harder it is for you to convince oil companies [or other foreign investors] to give you a contract that provides you with smooth revenues. That is to say, the harder it is to get the sort of contract that provides strong tax revenues even when [oil] prices are low.” Likewise, governments of countries where there are only “limited domestic legal challenges” to expropriation (because of a weaker legal framework for protecting foreign investors) — as well as a lower level of foreign direct investment — are less likely “to get much oil-price smoothing from their contracts” with foreign investors.

According to the researchers, “The results suggest that the structure of contracts between IOCs (independent oil companies) and host countries is related to the threat of possible expropriations in a way that is consistent with our predictions: Countries that have a higher ability to commit to contracts (as a result of larger costs associated with reneging on them), seem to obtain contracts that shift a larger degree of oil price risk to the IOC. These effects are economically significant. The ability to commit to contracts increases a volatility-averse country’s expected welfare, since in essence it allows the country to obtain an insurance policy against low oil prices.”

While some governments that have low levels of foreign direct investment may not mind losing the opportunity to attract further investments, countries that do have a good reputation among foreign investors will benefit from contracts that provide those nations with “smoother revenues, especially when oil prices are low,” says Van Benthem. “The more stable countries that have the better institutions will get the better deals.” No matter how helpful expropriations may be for their cash flow over the short term, governments need to recognize that they will suffer longer-term penalties, he adds. This includes not just the damage done to their international reputation, but the loss of foreign technical and operational expertise after foreign managers depart following expropriation of their assets.

On that score, however, one empirical finding of their research may be more surprising, notes Van Benthem: All other things being equal, it is riskier for independent oil firms to do business in those countries that are technologically advanced. “If the country has more experience with producing oil (measured by its total oil and gas extraction up to the point when the contract was signed), the country can produce oil quite efficiently, even without help” from the independent foreign firm. As a result, such countries “have less to lose when they expropriate during times of high oil prices.”

Based on their findings, what advice would the researchers offer to policy makers in resource-rich developing countries? “Even if a country’s reputation is not so good,” suggests Van Benthem, its officials should consider signing bilateral investment treaties with the governments of countries where its foreign investors are headquartered. These kinds of treaties can build confidence among foreign investors because they provide a significant disincentive for governments to expropriate their assets. For example, he notes, if Country X owned assets in the U.S., and Country X expropriated some assets owned by a firm with economic ties to the U.S., the firm could then legally seize some of Country X’s assets through an international arbitration procedure. “This is useful, because it makes it more costly for resource-rich countries to expropriate foreign assets.” On the other hand, in such a case, the foreign government “should be able to get a better deal with foreign companies” because foreign investors would realize that they now have less reason to fear that their assets would be seized.

Although this research analyzes data about contracts in the oil sector, Van Benthem points out that its major conclusions may be applied “to any foreign investment in any countries where foreign investors are worried about expropriation.”

"Slippery Negotiations: The Give and Take of Oil Contracts in Foreign Countries." Knowledge@Wharton. The Wharton School, University of Pennsylvania, 20 November, 2012. Web. 18 January, 2022 <https://knowledge.wharton.upenn.edu/article/slippery-negotiations-the-give-and-take-of-oil-contracts-in-foreign-countries/>

Slippery Negotiations: The Give and Take of Oil Contracts in Foreign Countries. Knowledge@Wharton (2012, November 20). Retrieved from https://knowledge.wharton.upenn.edu/article/slippery-negotiations-the-give-and-take-of-oil-contracts-in-foreign-countries/