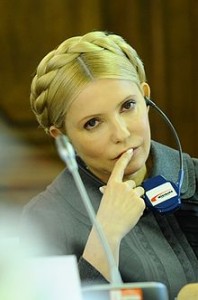 When a Ukrainian court earlier this week sentenced former Ukrainian prime minster Yulia V. Tymoshenko to seven years in jail, fined her $190 million and excluded her from politics for 10 years — all because of a natural gas deal she negotiated with Russia two years ago — some government officials and legal experts in the West cried foul.

According to an account in The New York Times, European leaders “have condemned the case as politically motivated, and hinted that they are unlikely to ratify a free trade and association agreement with Ukraine” that has been in the works for four years. The court based its ruling on a natural gas deal that Tymoshenko — now an opposition politician after losing her bid for reelection in 2010 — negotiated with Russian prime minister Vladimir Putin in 2009 for what the court said was an excessively high price.

What is behind all the politicking, and who is really at fault? According to Wharton management professor Witold Henisz, “what is billed as a purely political attack is not without justification. Yulia is no saint. There were suspicious gas deals under her watch which she likely benefited from. Her allies certainly did.” The punishment, however, “does go beyond what you would expect and has a punitive political element [because it] takes her off the political stage. It also demonstrates the weakness of the court system.”

The “sad thing,” he adds, is “that all of the post-independence leaders, including Yulia, have themselves [harmed] Ukraine’s political and legal institutions by focusing personal attacks on each other and [amassing] power for themselves instead of finding ways to … build institutions and processes that could provide a better future for their country. Now one of them is paying a steep personal price for her misgovernance in the past. Is it too severe a punishment or too light for her role in Ukraine’s recent political history? The unfairness of Yanukovich sitting in the Presidency unscathed makes it seem so, but in absolute terms, Yulia, Yanukovich and [former Ukrainian president Viktor] Yushchenko all deserve some time behind bars. Even that unrealistic aim wouldn’t help the country, however, because they have left” behind them little capability or capacity for others “to rule in their absence or in a different manner.”

Wharton legal studies and business ethics professor Philip M. Nichols, who has done research on corruption in Europe as well as Asia, describes Yulia Tymoshenko as “a complicated person” who may “believe in democracy or in government that actually is accountable to the governed. Her past, however, lends some credibility to those who question her sincerity.”

According to Nichols, Tymoshenko made millions of dollars through her association with Pavlo Lazarenko, who eventually became the prime minister of Ukraine. During the Soviet era “Lazarenko held several high positions, and after the independence of Ukraine, he served as energy minister. During that time, he developed close relationships with leaders of various energy industries, including Yulia Tymoshenko, the president of United Energy Systems of Ukraine. All of these allies profited from their relationships with Lazarenko, who awarded Tymoshenko’s United Energy Systems a contract to supply one third of Ukraine’s natural gas needs.”

United Energy Systems benefited further from Lazarenko’s patronage when, “after he was appointed prime minister by [Leonid Danylovych] Kuchma, [president of Ukraine from 1994 to 2005], he partitioned Ukraine’s energy market into separate sectors, awarding single energy firms monopoly rights in specific regions,” Nichols says. “Lazarenko facilitated the award to United Energy Systems of the most profitable contract rights, those of the industrial oblasts [territorial divisions]. The businesses associated with these monopolies accrued revenues equal to one fifth of the Ukrainian gross domestic product for that year. Lazarenko allegedly received payments from various energy companies in exchange for the award of monopolies. In the case of United Energy Systems, he also owned shares.”

International criticism rose to a level “that distracted even the venal Kuchma, who forced Lazarenko out of office,” Nichols says. “Lazarenko set out to destroy Kuchma politically, and recruited Tymoshenko as an ally. The campaigns on all sides were vicious and employed illegal tactics.”

Lazarenko’s story ends with him fleeing Ukraine, being denied asylum in Switzerland and facing trial in the United States, where he was convicted and is serving a seven-year sentence, according to Nichols. “It is almost impossible to calculate the damage that Lazarenko and his cronies have done to Ukraine. The damage is so extensive and goes so far beyond just money that it seems impossible. Lazarenko was listed by Transparency International as one of the eight most corrupt leaders in the world.”

Tymoshenko’s story did not end with Lazarenko’s flight, Nichols says. “She continued to fight Kuchma politically, and eventually found, and then left, a much better ally than Lazarenko: She became a star of Ukrainian and Eastern European media. But she got her start in an extensive scheme that bilked Ukraine of billions of dollars and gutted its nascent government. Her initial foray into politics was instigated by a fight to protect that scheme.  The fact that it took so long to convict her illustrates the fragility of Ukraine: That she has been convicted could be a sign of a much-needed change in how Ukraine deals with corruption.”