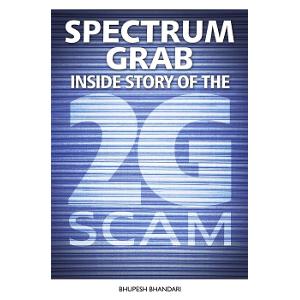 India has witnessed a spate of scams in recent times; corruption seems to be everywhere. Not surprisingly, it has inspired a new genre in writing — “scamlit” (scam literature). Not surprisingly, too, many books are overshadowed by newer cases of corruption even before they make it to the store shelves. Author Bhupesh Bhandari, who has just published a book called Spectrum Grab: Inside Story of the 2G Scam, has been luckier than most. The telecom scam still remains the biggest in India’s recent history. In this interview with India Knowledge at Wharton, Bhandari, a senior editor with business daily Business Standard, talks about how he has become one of scamlit’s leading lights.

An edited version of the interview follows:

India Knowledge at Wharton: You have emerged as one of the major exponents of what is being described as “scamlit.” What interested you in this genre?

Bhupesh Bhandari: When I started my career in journalism, the securities scam and the Jain hawala [illegal money transfer] case had just broken out. If you wanted to make a mark, you had to do stories on these cases and several others that were similar, though smaller. That was also the time that stock market manipulation was rampant. So, there was a natural movement towards such subjects. I learned how to write on scams and other misdemeanors without losing objectivity. That’s how the interest in “scamlit” was aroused.

India Knowledge at Wharton: The potential for writing in this area is practically limitless in India. What does it say of the post-reform period?

Bhandari: Indeed, the potential is limitless. What has helped journalists is e-governance. With the RTI [Right to Information Act], access to information is easy. A lot of government records are now available on the Net. Also, a lot of people from within the government are ready to talk and divulge the wrongdoings of their superiors.

India Knowledge at Wharton: Is it very similar to the history of the West in their industrial development stage? Robber baron minted money and politicians made wealth for generations. Are people more in the limelight in India because the very free and diversely owned media is not staying silent?

Bhandari: Yes, it is like that. But, in a sense, scams, and the public uproar, have helped in some way. There is an attempt to bring about transparency in the government’s dealing with business houses. For instance, had it not been for the 2G scam, I am not sure if the government would have gone for the auction of 3G spectrum. At the grassroots, the Aadhaar-based system [which gives unique IDs to all citizens] of cash transfers of subsidies should cut out the pilferage of kerosene, grain and sugar meant for the poor. This, I think, has resulted from the various irregularities that have been exposed time and again in the public distribution system.

India Knowledge at Wharton: You are promoting this book as being about the “mother of all scams.” This may have been true at the time of writing. Is it still so, given the coal mining and others scams that are emerging?

Bhandari: It was the mother of all scams at the time of writing. The Bofors scandal, which rocked the country in the 1980s, involved an alleged payoff of only Rs. 64 crore (US$12 million), a “baby scam” by current standards.

India Knowledge at Wharton: The Western perception of India is that it is a very corrupt country. But some of things illegal in India – lobbying, for instance – are perfectly legal abroad. Does this lead to “illegal” lobbying, payments to people in power and favors returned? Is there a solution then in legalizing lobbying?

Bhandari: In a way, lobbying is legal. That’s what industry associations do all the time. As long as they restrict themselves to conveying industry’s viewpoint to the government, it’s fine. The problem arises when lobbyists try to twist public policy for personal gain. The solution is to take discretionary powers out of the hands of politicians and bureaucrats.