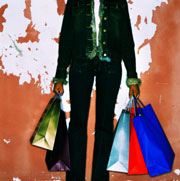 This holiday season, Internet shopping shows no signs of slowing down. Since November 1, online sales are up 15% over last year, and this year’s “Cyber Monday” – the Monday following the traditional bricks-and-mortar “Black Friday” – had a record $1.25 billion in purchases. In fact, single-day online holiday shopping sales have exceeded $1 billion five times already this year.

But bricks-and-mortar shop owners everywhere may be able to heave a sigh of relief. A new report produced by Wharton’s Jay H. Baker Retailing Center and The Verde Group, a market research consultancy, says that 76% of all purchases are still done the old fashioned way — at a store. The study — based on 1,221 responses to an online survey about shopping habits — notes that the web generates 22% of sales, while catalogs and mobile phones generate 1.4%, and 0.6%, respectively.

“All the attention is on online sales, so one can lose sight that three quarters of sales still happen in stores,” says Barbara E. Kahn, director of the Baker Retailing Center. “But it also means that nearly a quarter of sales happen online. That is a significant number, and it’s likely to grow.” She points out that shopping is much more than the “moment when you pull out a credit card to buy something,” and that online retail sites, catalogs and mobile phones are all important “channels” for shoppers, offering them a way to research products and prices in addition to making purchases.

In fact, the most important take-away for retailers from the research, according to Paula Courtney, president of The Verde Group, is “know thy customer by channel.” The study’s findings show that shoppers are very specific about what types of channels they like to use, she notes, and they are looking for different experiences from each of them.

Titled “Understanding the Multi-Channel Shopper,” the report breaks down four distinct types of shoppers based on their use of these channels:

Courtney notes that while the emphasis for many retail businesses has been on creating a seamless experience across multiple channels, the reality is that retailers need to spend more time addressing the specific needs of various channel users. “While it’s important to have consistent policies across channels, policies are different from experiences. This [research] suggests that an overriding emphasis on ‘consistent’ channel experiences is misplaced. Different channels attract different types of customers who demand experiences that are specific to their needs and preferences.”

For example, Kahn notes that while retailers’ websites can offer advantages like wider selection and lower cost to appeal to those who prefer that channel, they should try to make their bricks-and-mortar stores more “experiential” to attract those who like to shop on foot. That could include creating “stores within stores” focused on specific product lines, like the addition of Sephora cosmetics outlets in J.C. Penney, and frequent events to promote products but also create a social destination. This would have implications for human resources and training, she adds, since an emphasis on a customer’s “experience” in bricks-and-mortar stores would require a different skill set among employees than one might encounter in today’s retail environment.

For experiential shoppers, Kahn says, it’s ultimately about social interaction. “At the end of the day, we’re social people. Sometimes you just want to go to a store and talk with someone.”