Race, Gender and Careers: Why 'Stuffing the Pipeline' Is Not Enough - Knowledge@Wharton

Race, Gender and Careers: Why ‘Stuffing the Pipeline’ Is Not Enough 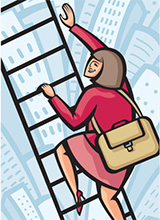 When Wharton operations and information management professor Katherine L. Milkman was earning her doctorate at Harvard University in business and computer science, it became clear that she would pursue a career as a professor. As she started looking around at job prospects, it also became evident that academia (particularly in her chosen field) was awash with white males. That’s when inspiration struck.

“Most of my research is very selfish,” Milkman says. “My own experiences tend to lead to questions I find interesting. You observe the world around you, and it generates hypotheses. I started this work when I was a student. Kathleen and I were really interested in the phenomenon whereby people look for a role model who resembles them and how that search influences the decisions they make.”

Using five years of personnel data and employee interviews from a large national law firm, the professors were able to document what many in the working world already believe is true and what other past research has also suggested — the higher the number of female supervisors, the higher the probability of promotion for junior-level female employees. (There were too few minority supervisors to explore this pattern as a function of race.) Their research showed the same notion holds true for the probability of exit for junior-level women. That is, social cohesion between demographically similar junior and senior colleagues helps organizations retain young, upwardly mobile professionals.

While there are obvious benefits associated with placing junior employees in work groups with senior mentors with whom they can identify, the professors found a perplexing side effect of clustering demographically similar junior lawyers. When work groups contained a high number of same-gender or same-race underrepresented minorities all hoping to become partners at the firm, these employees tended to leave in higher numbers because they perceived that the competition reduced their chances for promotion.

“Our hypotheses pertaining to the benefits of mentoring are pretty straightforward,” Milkman notes. “What’s a bit more counter-intuitive and what we think is the big contribution of this work is this third hypothesis. Previous work suggested that you want [this type of work group] because it creates social cohesion, but there may actually be harmful effects to having more people who look like you demographically at the same level competing for a promotion.”

“They may feel there are implicit quotas. There’s anxiety about that,” she adds. “Even if that’s not the case and the organization is not acting that way, if employees have that perception, it can lead to the same result.”

It’s interesting to note that the effect is also present when the pool of associates is composed largely of men. Male employees, like women and minorities, perceive that their chances of success are hampered by the presence of numerous other men, and they tend to leave the organization in larger numbers, Milkman states. “We really thought this was going to be the case only for minorities and women,” she says, referring to the third hypothesis. “We didn’t predict this would be such a strong phenomenon for men, but it affects them too.” However, the exit decisions of white and Asian employees are not impacted by working in groups with other white and Asian employees, whereas underrepresented minorities are significantly more likely to exit the firm if they work in groups with many other same-race minorities.

Milkman and McGinn believe professional service organizations — such as law, accounting and consulting firms, and academic institutions — shape some of society’s most vital resources and are important domains for examining issues of diversity. Despite their importance, inequalities by sex and race in the senior ranks of these organizations “remain rampant.” The professors point to a 2009 study that showed women made up 46% of associates but 19% of partners across U.S. law firms. Racial minorities fared worse, representing 20% of the lawyers across the country but only 6% of partners.

Milkman and McGinn focused their research on a law firm because of the “up or out” structure of such organizations. Within the firm they studied, junior associates had, on average, a nine-year window for promotion. By the 10th year, if an associate had not been promoted to partner, he or she left the firm. The professors analyzed five years of personnel data, including notes from exit interviews, on more than 600 employees. The data was released to them by the firm under a confidentiality agreement. The professors also followed up their quantitative analyses by interviewing some of the firm’s employees.

Their research was somewhat limited by the scarcity of minority senior partners at the firm, the professors note. They also emphasize that their results are best generalized to other professional service organizations where human capital is critical, senior sponsorship is coveted and competition is intense. Still, the analysis of junior-senior mentoring among women at the firm produced the most concrete results.

“Past research finds that workplace demography affects members of traditionally high-status groups — men and whites — differently than it does those from traditionally lower-status groups — women and racial minorities,” the paper states. “Our research offers insights into why this is so. In the firm we studied, both men and women expressed a need for senior sponsorship, but the presence of females in leadership positions offered a vital signal in addition to their sponsorship. Higher proportions of same-sex seniors were more important for women than for men because the presence of female partners in the work group provided [signs] to junior women that they could succeed, while junior men took the possibility of success for granted.”

Essentially, when people are considering their chances of promotion, they look around their work environment for cues. “Our conclusions are that our hypotheses are largely supported,” Milkman says. “Having mentors and role models who look like you is important. But, more interestingly, we see these negative effects associated with being in a work group with lots of competitors for promotion who resemble you demographically.”

The research suggests that the clustering of same-sex or same-race employees into work groups in order to foster a sense of cohesion or community is a practice that managers may want to reconsider. “Stuffing the pipeline,” as Milkman says, is not enough. “Our results call for organizations to attend to the ways in which policies and practices invoke competition and comparison within demographic categories,” the professors write. “Attempts to design employment practices that are blind to the demographics of candidates are likely to succeed only if all candidates perceive and receive equal mentoring, sponsorship, and peer support regardless of their race and gender.”

Milkman shares her personal experience at Wharton to relate her point. “I’m in a department that’s very male,” she says. “That’s not to say Wharton doesn’t have female professors. There are many female professors who were hired at the same time I was, but they are in different departments. It’s been fantastic to get together without any competitive element because we know we’re not up against each other. There’s no anxiety about competition, but we get the benefits of social cohesion, and that’s been amazing. I’ll bet if these women were in my court, I would have a different point of view and a different relationship with them.”

Milkman’s career choice inspired her to study the effects of race and gender on career mobility. In turn, that research has led her to ask more questions about the role of discrimination in business and economics. It’s a tough area to explore, she acknowledges, but worthwhile if it can lead to greater understanding, better management practices and increased parity for underrepresented employees.

“Gender and race issues are really salient to me now,” she notes. “As a result of doing this research, I got really interested in discrimination. The flip side of the issues studied in this paper is to ask what decisions do potential employers or mentors make about a person because they are a women or a minority?”

Milkman is currently analyzing data from an experiment on the role that race and gender play in patronage. She sent emails to 6,500 professors at academic institutions across the country from someone requesting their help as a role model. The emails came with signatures that indicated whether the “student” was male, female, white or a minority, and they asked the professor to spare time for a 10-minute meeting. The requests varied on whether the student wanted to meet that day or next week.

“The first high-level finding is that even in academia, where people might not expect to see it, we find significant rates of race and gender discrimination,” Milkman says. “Females and minorities received significantly fewer responses from prospective mentors. And when the professors were asked to reflect a week in advance, that’s where the discrimination really showed up. The results are quite stunning.”

For Milkman, the ultimate goal is as clear for her now as her career path was years ago. She hopes her work will make a difference. “Both of these projects are asking the same question,” she notes. “How do we change it?”

"Race, Gender and Careers: Why ‘Stuffing the Pipeline’ Is Not Enough." Knowledge@Wharton. The Wharton School, University of Pennsylvania, 29 August, 2012. Web. 21 October, 2021 <https://knowledge.wharton.upenn.edu/article/race-gender-and-careers-why-stuffing-the-pipeline-is-not-enough/>

Race, Gender and Careers: Why ‘Stuffing the Pipeline’ Is Not Enough. Knowledge@Wharton (2012, August 29). Retrieved from https://knowledge.wharton.upenn.edu/article/race-gender-and-careers-why-stuffing-the-pipeline-is-not-enough/

"Race, Gender and Careers: Why ‘Stuffing the Pipeline’ Is Not Enough" Knowledge@Wharton, August 29, 2012,
accessed October 21, 2021. https://knowledge.wharton.upenn.edu/article/race-gender-and-careers-why-stuffing-the-pipeline-is-not-enough/