Putting a Face to a Name: The Art of Motivating Employees 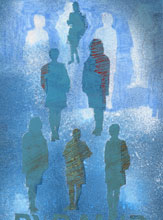 Could a simple five-minute interaction with another person dramatically increase your weekly productivity?

In some employment environments, the answer is yes, according to Wharton management professor Adam Grant. Grant has devoted significant chunks of his professional career to examining what motivates workers in settings that range from call centers and mail-order pharmacies to swimming pool lifeguard squads. In all these situations, Grant says, employees who know how their work has a meaningful, positive impact on others are not just happier than those who don’t; they are vastly more productive, too.

That conclusion may sound touchy-feely, but Grant has documented it in a series of research papers. In one experiment, he studied paid employees at a public university’s call center who were asked to phone potential donors to the school. It can be grim work: Employees don’t get paid much and suffer frequent rejections from people unhappy about getting calls during dinner. Turnover is high and morale is often low. So how do you motivate workers to stay on the phone and bring in the donations?

One relatively easy answer: Introduce them to someone who is aided by those dollars.

In his 2007 study, Grant and a team of researchers — Elizabeth Campbell, Grace Chen, David Lapedis and Keenan Cottone from the University of Michigan — arranged for one group of call center workers to interact with scholarship students who were the recipients of the school’s fundraising largess. It wasn’t a long meeting — just a five-minute session where the workers were able to ask the student about his or her studies. But over the next month, that little chat made a big difference. The call center was able to monitor both the amount of time its employees spent on the phone and the amount of donation dollars they brought in. A month later, callers who had interacted with the scholarship student spent more than two times as many minutes on the phone, and brought in vastly more money: a weekly average of $503.22, up from $185.94.

“Even minimal, brief contact with beneficiaries can enable employees to maintain their motivation,” the researchers write in their paper, titled “Impact and the Art of Motivation Maintenance: The Effects of Contact with Beneficiaries on Persistence Behavior,” published in the journal Organizational Behavior and Human Decision Processes.

Motivating workers is a topic that interested Grant long before he became a professional academic. Prior to graduate school, he worked as an advertising director for the Let’s Go line of travel guides. “We were producing travel guides and we had a couple of hundred people working in an office that would help travelers see foreign countries in a new way and travel safely,” he recalls. “None of the editors had any contact with any of the actual readers.” Grant suspected that the staffers would find more satisfaction in their work — and probably work even harder — if they could regularly interact with the readers whose globetrotting they enabled.

At the travel guide business, he never got a chance to put that hunch into practice. But as he moved towards his doctoral research at the University of Michigan, he returned to the subject, using call centers, sports facilities and classrooms as some of his early laboratories.

According to Grant, just being aware of the impact your job has on others can help with motivation. In a follow up study to the one he published in 2007, he focused on lifeguards at a community recreation center. Some of them were given stories to read about cases in which lifeguards had saved lives. A second group was given a different kind of reading material: testimonies from lifeguards about how they had personally benefitted from their work. The results: Those who had been reading about their ability to avert fatalities saw their measure of hours worked shoot up by more than 40%, whereas those who had merely learned that a lifeguard gig could be personally enriching kept working at the same clip. The results were published in a paper titled, “The Significance of Task Significance: Job Performance Effects, Relational Mechanisms, and Boundary Conditions,” in the Journal of Applied Psychology.

Beyond awareness of job impact, face-to-face meetings with individuals who benefit from a job well done can dramatically improve workers’ performance. In Grant’s 2007 study, a second experimentlooked at a group of students who were tasked with editing cover letters of fellow students who had contacted the university’s Career Center in order to help find a job. One group of the student editors had the opportunity to see a would-be beneficiary who stopped by to drop off his letters and made small talk, purportedly unaware that the people in the room were the ones who would be tuning up his writing. Another group of student editors dug into the identical cover letters without having laid eyes on their author. The result? The people who had met the job-seeking student — even for a brief, apparently superficial conversation as he dropped off his paperwork — spent significantly more time on the editing task than those who hadn’t.

However, there’s more to know about contact than the simple idea that it is worthwhile to plunk workers down next to someone their daily tasks have aided. In a second run of the Career Center experiment, for instance, the alleged student job-seeker’s biographical information was also manipulated. Again, both groups of editors worked on identical packets of cover letters. But they also saw a personal information sheet the student had submitted to the Career Center. On one sheet, the student wrote that he desperately needed a job, saying he was having a hard time paying bills. For the other group, the personal statement did not contain any such language. Again, one group of editors met the student for the same few minutes of small-talk, and another group had no contact with him.

As in Grant’s lifeguard experiment, reading the high-need personal statement — that is, learning that their work was very important — was crucial. But, the one-two punch of knowing the beneficiary’s needs and meeting him in person generated the largest impact on motivation. Editors who didn’t learn of the student’s dire financial straits put in an average of 27 minutes of work. Editors who read of the student’s money woes but never met him clocked 26 minutes apiece. Only those who had met the student and read of his worries worked significantly harder on the task of helping him,spending more than a half-hour on the task, or an average of 20% more time than the other editors.

Grant says this suggests that “task significance” is the key driver, and that face-to-face interactions, even seemingly superficial ones, can serve as a way of driving that significance home. In other studies, he has found that engineers, salespeople, managers, customer service representatives, doctors, nurses, medical technicians, security guards, police officers and firefighters who can directly see their impact on others all achieve higher job performance.

Over the course of several years’ worth of experiments and surveys, Grant and his colleagues have spotted a few other nuances in how meeting beneficiaries affects workers. For instance, workers with a strong set of “prosocial values” — determined by those who say they agree strongly with statements such as, “It is important to me to respond to the needs of others” — are much more likely to be affected by reminders of how significant their work is. By contrast, generally conscientious workers, who presumably work hard whether or not their labors are beneficial, don’t show nearly the same spike in performance upon being exposed to their beneficiaries.

Still, Grant says that in a wired economy where workers are increasingly likely to be physically isolated from end users, it’s important for employers to build in systems that reinforce employees’ awareness of whom they are helping. “Technology is this really fascinating double edged sword,” Grant says. “On one hand, we have more and more ability to connect employees to end users from a different geographic region…. But on the other hand, technology has also reduced the need for face-to-face interaction. A lot of organizations stop short of making this sort of connection because the work can get done without it.”

That’s a mistake, he says — one that many companies are now working to avoid. In fact, Grant is consulting with a number of organizations to establish these sorts of procedures on an ongoing basis. One of them, a pharmaceutical firm that does mail-order prescriptions, established a system where staff pharmacists occasionally rotate into regular pharmacies where they interact with customers. They also began attaching  photos of customers to their mail-order files, on the assumption that humanizing the names on all those medical forms would improve performance and minimize mistakes on the crucial, if sometimes mundane, work of pharmaceutical delivery.

Even in firms that are not focused on helping people as a core mission, managers might still look at increasing contact between workers and others in the organization who benefit from their labor, Grant says. “Everybody has an end user. In some cases, those end users are more inside the organization than outside. In some cases, the end users who managers want employees to focus on are coworkers, colleagues in other departments, or managers themselves.” The question, he says, is: “How do we establish that connection as a regular routine, whether it’s a weekly conference call with [co-workers] or a monthly check-in?”

Corporate charity might also have a productivity-boosting effect. “Some of my recent research on a Fortune 500 company suggests that, if you’ve got employees where the primary purpose of their job is not to help people, where there’s no clearly defined group of end users, we can think about corporate philanthropy as a substitute. One option is to give people the chance to take responsibility for personally meaningful, important community service that can be sponsored by the company [so that they think], ‘I make a difference by being here.'”

"Putting a Face to a Name: The Art of Motivating Employees." Knowledge@Wharton. The Wharton School, University of Pennsylvania, 17 February, 2010. Web. 15 January, 2021 <https://knowledge.wharton.upenn.edu/article/putting-a-face-to-a-name-the-art-of-motivating-employees/>

Putting a Face to a Name: The Art of Motivating Employees. Knowledge@Wharton (2010, February 17). Retrieved from https://knowledge.wharton.upenn.edu/article/putting-a-face-to-a-name-the-art-of-motivating-employees/

"Putting a Face to a Name: The Art of Motivating Employees" Knowledge@Wharton, February 17, 2010,
accessed January 15, 2021. https://knowledge.wharton.upenn.edu/article/putting-a-face-to-a-name-the-art-of-motivating-employees/