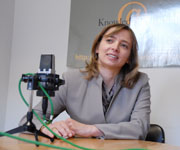 Had you met Helen Greiner when she was a student at MIT in the late 1980s, you might not have pegged her as the future head of a consumer and military products company. She was quiet, a bit shy, and, as even she would agree, something of a nerd. But she shares a key trait with many successful business leaders — a passion for something. In her case, it happens to be robots.

That passion led Greiner — along with Colin Angle and Rodney Brooks — to found what would become iRobot in 1990.  Over the past four years, iRobot has sold more than 1.5 million robots for cleaning people’s floors and has deployed more than 300 tactical military robots in Iraq. The company completed its initial public offering on November 15, 2005.

Greiner this week gave a presentation at Wharton sponsored by the School’s entrepreneurship and technology clubs. She has agreed to sit down with Mukul Pandya, executive director of Knowledge@Wharton, Robbie Shell, editorial director of Knowledge@Wharton and Kendall Whitehouse, contributing editor, technology, to talk about her fascination with robots and what impact robots have, and will have, on our everyday lives. We have excerpted some of her comments for this short podcast. The complete interview will be published soon as a Knowledge@Wharton article.

Note: Helen Greiner will speak in June 2006 at the Tenth Annual Wharton Leadership Conference, titled “Leading With Resilience: Coming Back from Challenge and Adversity

If you have your favorite podcast source, the url is: http://knowledge.wharton.upenn.edu/podcastcurrent.xml
For your convenience you may play or download with the links under the title