Because there is so much complexity surrounding Brexit, analysis tends to fall short, according to Wharton Dean Geoffrey Garrett. In this opinion piece, Garrett offers a concise guide to the evolving situation, “using as little Brexit jargon as possible, decoding it where necessary — and ending with a couple of predictions.”

Have you noticed something about the breaking news coverage of Brexit over the past week in America, and I suspect across most of the world outside Britain? Beyond the headlines – “Biggest Defeat Ever for May,” “May Not Removed As Prime Minister, But No Plan B” – there was not much analysis of what is going on. The reason: Brexit is so complex, so riddled with jargon, and so uncertain, that most media have chosen not to go down the rabbit hole.

But Brexit is too important for that. It has the potential to wreak havoc far beyond the U.K., especially given the volatility and fragility of markets in early 2019.

Here is my attempt to analyze what is going on, in as simple terms as I can, using as little Brexit jargon as possible, decoding it where necessary — and ending with a couple of predictions. Here’s one obvious prediction: More damaging uncertainty ahead. And one conjecture: BINO – a Brexit, but in name only.

May’s deal: More than two years after the Brexit referendum, last November Prime Minister Theresa May finally struck a deal with the EU on how the U.K. would exit the economic and political block. That deal was shot down in flames by parliament early last week, in the worst ever defeat for a British government. May’s deal goes into excruciating detail (585 pages) over the dizzying multitude of steps needed to disentangle Britain from the tentacles of 40 years of EU laws, regulations and practices, the oft-dubbed “taking eggs out of an omelet.”

But her deal only expressed hopes for what happens after that, for the future of the U.K.’s relations with the EU. The core unresolved issue is this: Britain wants continued free trade with Europe while (re)gaining the ability able to cut its own trade deals with other countries.

On its face, this is a big no-no because it violates the central tenet of the EU’s “customs union.” Unless and until the EU accepts this (and there is not only no guarantee but also little realistic prospect that it will), the EU is insisting on a “backstop” – keeping the U.K. in the EU customs union to avoid renewing border restrictions on people and goods between Northern Ireland (part of the U.K.) and Ireland (a committed EU member). Many believe this is essential to maintaining peace on the Irish border. But the Brexiteers consider it an indefinite, and potentially permanent, violation of British sovereignty that undermines the whole idea of Brexit.

“Brexit has the potential to wreak havoc far beyond the U.K., especially given the volatility and fragility of markets in early 2019.”

No deal: If May’s deal – or some modification of it – is not approved by the British parliament by March 29 this year, this would trigger the ultimate “hard” Brexit. Britain would no longer have to abide by any EU rules. But its access to Europe would be no better than any other country that has no treaties with the EU. For diehard Brexiteers, this is victory – Britain regains full sovereignty and is then free to cut trade deals with the U.S. and other countries. Everyone else calls this “crashing out” of the EU, with myriad devastating consequences for Britain, including an immediate and potentially long-lasting recession.

Revoke Article 50: If May cannot get a deal (any deal) through her own parliament, the clear alternative to avoiding a no-deal Brexit would be for the U.K. to revoke Article 50 of the EU treaty – that is, to call a complete end to the whole process, and to revert to the status quo of U.K. membership in the EU. While May has the formal power to revoke Article 50, she only became prime minister by promising to deliver Brexit. Giving up would mean she would have to resign, and who knows what would happen then?

Extension: If neither a May-like deal nor a no-deal Brexit is acceptable to the British parliament (likely), but the government does not have the stomach to revoke Article 50 (also likely), the only pathway for the May government would be to beg the EU for an extension of the March 29 deadline. The EU would not have to accept, however, and there are many in Europe who are either fed up with Brexit or want to make an example of Britain to deter other EU members from contemplating their own exit.

The Conservative government: To say the Conservative Party, or so-called Tories, is divided on Brexit is a gross understatement. Its pro-Europe wing (“we like free markets throughout Europe”) represents a clear majority of Tory MPs, which has been the case since Conservative PM Ted Heath first led Britain into Europe in the early 1970s. But the staunch Brexiteers (“Brussels can’t tell us what to do”) represent a vocal and passionate minority, going back to Margaret Thatcher’s days. The ratio of Tory MP pro-EU to Brexiteers is about 2:1 in favor of the remainers. But led by May, they are pledged to following the “will of the people” to Brexit.

The Labour opposition: The Labour Party is also divided on Brexit, with roughly the same 2:1 split in favor of staying in the EU. The divisions are more vestigial than visceral, and much less visible than the rupture inside the Conservative Party. The old socialist wing of Labour (including its current leader Jeremy Corbyn) has always been skeptical of the EU as a “capitalist plot.” But the bulk of Labour MPs are remainers because they consider the EU as embodying a gentler modern update of free market dogma. There is a big benefit to being in opposition right now. Labour has not had to say what it would do on Brexit; the two factions do not have to play their hands; they can just unite in criticizing May for botching it.

British voters: The Brexit referendum in 2016 was close – 52% to 48% in favor of leaving the EU. The social divisions look very much like those over ‘Make America Great Again.’ The pro-Brexit coalition was older, whiter, less educated and living outside London and other major cities. Remainers were younger, more multi-ethnic, better educated and more urban.

In the two and a half years since the referendum, public opinion has slowly drifted away from Brexit – as the challenges and consequences of actually leaving the EU have become more apparent. But today, the options facing the public are more complex (though maybe more realistic) than the simple stay/go choice in 2016.

While voters remain deeply divided, according to the most recent polling the most popular, least-worst outcome is holding a second referendum resulting in a vote to remain in the EU (36%). But more people (41%) think this is a bad outcome (the only worse one is a no-deal Brexit). Suffice it to say, the British public remains deeply divided on Brexit, and the proliferation of potential pathways makes it very hard to find solid majorities for anything. 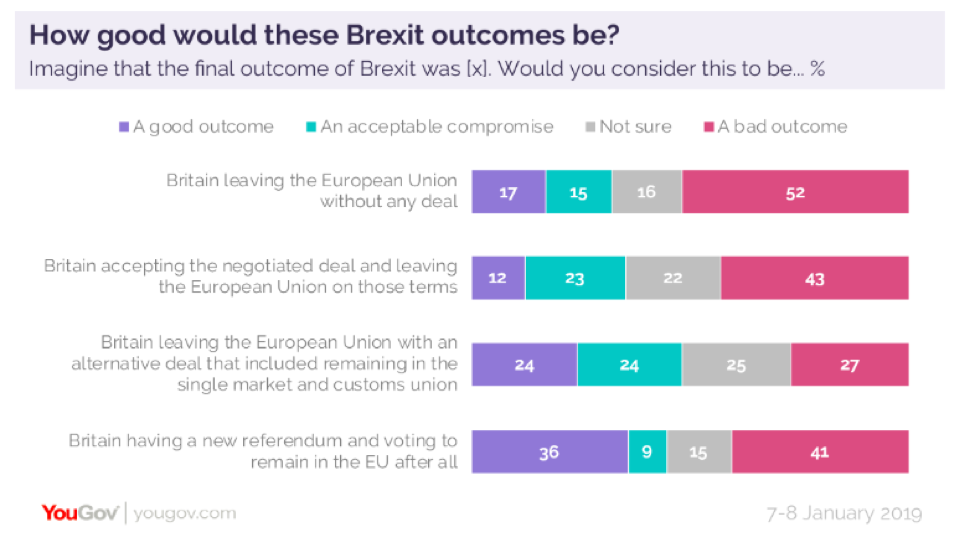 The EU: All 27 other member countries in the EU have to agree to any exit deal for the U.K. Rather than having each country negotiate for themselves, the EU has centralized this – allowing Brussels to negotiate on behalf of all 27 capitals. This is why the EU says the May deal is the only possible deal. Otherwise everything would be back to square one. Stepping back a bit: In 2016, the EU did not want the U.K. to leave, for myriad obvious reasons. More than two years later, many in Europe are fed up with Britain, and they want to make an example of it. Bottom line: Any attempt by Britain to strike a fundamentally different deal from May’s will be a) very hard and b) take a long time.

Prime Minister May will try to get a deal through parliament, either by “hardening” the proposal to win over the Brexiteers, or by “softening” it enough to get a lot of Labour MPs to vote with her. Both options seem forlorn. The pro-Brexit right actually may want a “no deal” outcome. The Labour party wants to win government, and only then tackle Brexit. They have no interest in helping May secure a deal.

“The uncertainty generated by Brexit is only likely to increase in the months ahead.”

That means nothing much is likely to happen as the clock ticks towards March 29. Revoking Article 50 would repudiate everything May has stood for as Prime Minister. So the only way that could happen would be if she is removed as Prime Minister, by her own party – but her party’s rules currently make this impossible. In any event, a rupture inside the Tory party would likely trigger a British general election, which in turn would inevitably raise the specter of a second Brexit referendum.

As a result, the most likely short-term outcome is “kick the can down the road” – Britain asks for, and the EU agrees to, an extension of the Article 50 deadline. But for how long? It took May and the EU two-plus years to agree to a deal and then only a few hours for the British parliament to tear it up. Since Labour wants to win the next election, it won’t support the Tory government on any go-forward plan – under any circumstances – because this is their path to government.

The hardline Brexiteers really might think no deal is the best Brexit. It is hard to see how these British political dynamics would change with an extension to the deadline. Knowing this, why would the EU agree to give Britain an extension? Because a no-deal Brexit would be a disaster for Europe, too.

So a point prediction: The uncertainty generated by Brexit is only likely to increase in the months ahead. And this could not come at a worse time with volatile markets everywhere and geopolitical risks rising all around us.

Second, a conjecture: At the end of the day, a soft Brexit will win the day because it commands clear majority support in parliament and is the plurality winner in the electorate. That is why I believe the ultimate outcome will be BINO – Brexit in name only. I just don’t know when Britain will get there. I suspect it will take years, not months. Brexit policy wonks are calling this outcome “Norway” or even “Norway+.” Decoding what that means is for another day. But the hint is this: Norway wanted both sovereignty and to be part of the EU market (as the U.K. does). Norway was willing to pay a very high price to get both. I suspect ultimately the U.K. will have to as well.