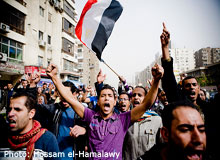 The obvious economic victims of the Arab Spring have been the countries that witnessed the most violent protests. Egypt’s economy, for instance, has suffered steep hits to its vital tourism segment. Representing 10% of the country’s GDP, Egypt’s tourism revenues are at $9 billion for 2011, down one third from the previous year, officials reported. As a result, Egypt’s GDP contracted by 4.2% in the third quarter (on an annual basis), and grew just 1.8% by the fiscal year’s end in June.

But according to a new report by professional services firm Grant Thornton, on a global scale, North American businesses have been most negatively impacted by the tumult of the Arab Spring. “Businesses around the world are continuing to count the costs,” the report notes. “More than 22% of businesses globally report that the unrest has had a negative impact on their business. This figure is highest in North America, where a quarter of businesses report a negative impact.”

Much of that impact has been in the form of increased fuel prices pushing up operation and production costs, according to the report. Brent crude in May reached $118.70 a barrel, its highest price since August 2008. Oil prices now hover around the $100 a barrel mark.

Global investment in countries recovering from the Arab Spring will also be needed for the region to meet future oil needs, according to the International Energy Agency (IEA). With global oil demand expected to reach 99 million barrels a day by 2035, the IEA estimates the North African energy sector will need $2.7 trillion in investments to keep up.

Another impact on businesses, the report adds, is that certain supply routes in the region have been disrupted, meaning longer times for shipping and more complex logistics for some companies. For example, because of Arab Spring-related trade disruption, 53% of businesses in Turkey reported a negative impact.

But Arab Gulf countries that have managed to keep protests at bay, such as the United Arab Emirates, have profited from their logistics infrastructure. Dubai’s ports next year should see a 6.6% increase in traffic, averaging growth of 5.7% to 2016, according to forecasts by Business Monitor International.

The Grant Thornton report notes that despite feeling the impact of the Arab Spring, only 6% of North American companies were less likely to do business in the Middle East as a result of it. Firms located in the BRIC countries (Brazil, Russia, India and China) were the most wary of the region, with 17% of respondents stating they were less likely to do business there.