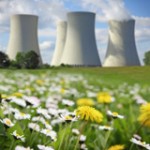 Siemens’ announcement last week that it will stop making nuclear energy generating equipment surprised many observers. It was the latest in a series of body blows to the nuclear power industry since Japan’s Fukushima power plant disaster on March 11. Following the nuclear meltdown, Germany, Switzerland and Italy all said they were not only canceling plans for future reactors, but they also would phase out existing nuclear plants. Japan has also turned away from building new nuclear reactors.

Siemens’ announcement was directly tied to the German government’s decision to walk away from nuclear power. The chapter “is closed for us,” Peter Löscher, Siemens’ CEO, told Der Spiegel magazine. The reversal followed Germany’s decision to shutter the nation’s 17 existing nuclear power stations by 2022 and instead embrace green energy, he said. Germany’s plan is to produce 35% of its energy from sustainable sources by 2020, something he called “the project of the century” and “realistic.”

Even in France, which derives 75% to 80% of its energy from nuclear plants, energy minister Eric Besson said recently that the country would study of the nation’s energy mix through 2050 and consider a move out of nuclear energy production. “We will study all possible scenarios for what we call the energy mix,” he said. “It will be done with total objectivity, in full transparency, without avoiding any scenario (…) including the scenarios of a nuclear exit.”

It’s been quite a snowballing of events. Does it signal a slow death for nuclear power, when just before the Japanese disaster the industry’s fortunes seems to be reviving?

March 11 (also referred to as 3/11) “has been a wakeup call for many who had pictured nuclear energy as the safest and greenest energy possible – a haven to meet the super-fast growing demand for energy the world will face in the coming decades,” says Erwann Michel-Kerjan, managing director of the Wharton Risk Management and Decision Processes Center. In Japan, emotions surrounding the Fukishima reactors are still running high “as developments are relayed by the media and translated into action by politicians,” noted Michel-Kerjan, who just returned from the country. Siemens, meanwhile, “is very active in new green technologies and its decision to move out of the nuclear business might be justified by balancing the risk and return of staying in this field as much as by their competitiveness in other technologies.”

And so far at least, the French energy minister has simply asked for a study. “This does not mean France is leaving the nuclear field, but simply that the country is re-evaluating its options, “which is something most OECD [the Organization for Economic Cooperation and Development] countries do routinely “as part of their multi-year planning,” Michel-Kerjan added. “It’s just that this time this is more visible than in recent years.”

Still, Fukushima “has taught us that even one of the most prepared countries in the world failed when faced with a disaster of very large scale. We all need to learn from 3/11 and put our resilience to future natural disasters on the agenda of the highest decision makers in the country. It is a matter of national interest and of competitiveness.”

Reducing the amount of nuclear power planned for the future sparks a highly challenging effort to replace an important energy source. Reductions would also likely be seen as a huge setback by some proponents for strict limits on carbon dioxide and other greenhouse gas emissions that cause climate change. Some of the staunchest opponents of greenhouse gas emissions are strong supporters of nuclear energy expansion, noting that nuclear’s ultra-low greenhouse gas emissions are on par with solar, hydro and other sustainable forms of energy, but that those sustainable sources cannot be developed quickly enough to meet the world’s fast growing energy needs. Therefore, they argue, more nuclear power is needed, at least for some time, to fill the gap.

Future power needs were underscored just yesterday when the U.S. Energy Information Agency (EIA) released new projections in its International Energy Outlook 2011 report, showing that the world will use 53% more energy in 2035 than today, with climate-changing emissions rising by 43% (see EIA’s graphs below for a breakdown by energy type). 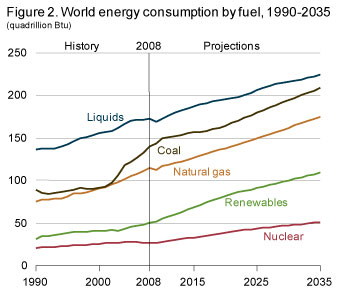 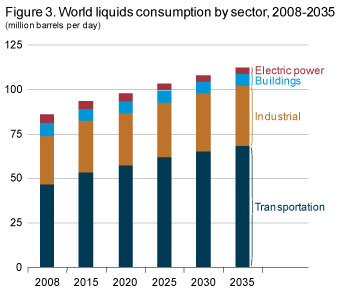 Meantime, the report’s projections for nuclear energy may already be out of date, given the most recent concerns discussed above, and the new report acknowledges that “… a number of issues could slow the development of new nuclear power plants.” These include: plant safety; radioactive waste disposal; proliferation; high capital and maintenance costs; a lack of trained labor resources; and limited global manufacturing capacity (something likely to be exacerbated by the Siemens move). Given the new energy direction of countries like Germany, “other countries may adopt a similar response “… although [that is] not reflected in the IEO2011.”

For more Knowledge at Wharton on this topic, see:

U.S. Energy Policy after Japan: If Not Nuclear, Then What?