These days, technology start-ups want more than just a check from venture capital backers and other investors. They are increasingly looking for operational help and industry expertise as well, a recent survey of Wharton alumni in the San Francisco area shows.

In a marked departure from the dot-com era of the 1990s, these companies also put more value on market know-how and connections over snagging a high valuation or a venture capitalist with a marquee name, according to a November 2013 survey of 126 mostly senior tech executives or managers who work at young companies.

Such a shift in the trend is a result of venture capitalists also raising the bar on their investment criteria. No longer are VC firms content to just take a stake in a company in a hot industry with growing market share, at least for startups beyond the seed stage of investment,. Now investors are also insisting on start-ups having a business model with a path to profitability.

“Investors are no longer just blindly supporting a company, and startups are no longer just doing well by virtue of being in a hot new market space,” says Saikat Chaudhuri, Wharton adjunct associate professor of management and executive director of the Mack Institute for Innovation Management, who helped craft the survey questions. “Companies really are expected to think about profitability.”

As investors ask for proof of sustainability, startups in turn want backers to help them grow instead of just writing a check. The explosion of incubators and accelerators like Y-Combinator, 500 Startups, RocketSpace, Rock Health, Plug and Play and others is in large part attributable to this need. Even many institutional VC firms, such as Andreessen Horowitz, Kleiner Perkins, and Sequoia, are selling more than money. “Other things like the operational metrics, recruiting capability, marketing and industry expertise and connections, these things have become hugely important,” says Chaudhuri.

In the survey, 32% of respondents said they chose backers based on industry expertise and connections. It was the second most popular answer — topped only by the level of capital required — at 35%. Other factors included the strategic and commercial benefits brought by the investor, speed of the investment decision and personal chemistry.

Notably, a marquee name and the best valuation, though still important, came in a bit lower among the reasons the start-ups chose their slate of investors. Half of the survey participants worked at companies with 50 or fewer employees and the majority were in Internet, biotech, social media and life sciences industries. Also, 54% of respondents were between 36 and 55 years of age.

As start-ups’ needs change, the make-up of venture capitalist firms must undergo some shifts as well, Chaudhuri points out. VCs increasingly will need to have industry and operational experts on board alongside the token financial whiz. Indeed, 56% of survey respondents said VC firms have to “restructure substantially” to stay relevant to the start-up community. This is particularly true of those startups in the social media/consumer app/mobile/Web 2.0 space, where it is possible to develop a product and engage in customer acquisition activities for very modest levels of capital.

Wharton management professor Raffi Amit says the VC industry already is going through a “seismic” change. “The industry is contracting,” he states, noting that there were 1,000 VC firms in 2000, but now only 300 remain active. But while the number of VCs has declined, the overall investment pot for start-ups is larger because the number of alternative sources for funding — including “super angels,” incubators and crowd-funding platforms — has “exploded,” Amit adds.

Meanwhile, the cost of starting a company has fallen substantially, leading to a “tidal wave” of new entrepreneurs, he says. But while start-ups may get initial funding, many are unable to acquire additional capital in a second round and die. Thus, having an investor with operating experience is “very advantageous,” Amit notes. “Many founders are young and have never run a company. Having a ‘grown up’ to help them avoid pitfalls would be enormously helpful.”

The new focus of start-ups and VCs also reflects a maturing of players in the technology sector after learning painful lessons from the dot-com crash of 2000. VCs are now vetting investments more carefully. “Instead of spreading a lot of money thinly, people are now willing to wait a little bit for more certainty in the business and then put a little more money into those firms that seem more promising,” Chaudhuri says.

Case in point is former star Morgan Stanley analyst Mary Meeker, a well-known Internet bull who is now a partner at famed VC firm Kleiner Perkins Caufield & Byers. “She was one of the most bullish people,” Chaudhuri notes. Now, Meeker, who was hired for her ability to read industries and their likely strategic direction, is more measured. “She’s still someone whose role is to think about the future and where things are going,” he adds. “But she is much more cautious.”

Wharton | San Francisco vice dean Doug Collom has a different view. “There is a well-known phenomenon occurring today in the industry call the ‘Series A crunch’ — and more recently, the ‘Series B crunch’ — that has resulted in part from a lot of institutional VCs spreading modest, seed-level amounts of money in early stage companies, with little or no diligence,” Collom says. “Then, when these startups burn through their seed capital and seek to step up to institutional levels of financing, i.e., in the range of $2 million to $5 million or more, the VC investor only at that time will take a more deliberate look to see if a follow-on financing at that level can be warranted. The number of companies that are failing because of the ‘crunch’ that occurs when the institutional VCs fail to make these follow-on investments is massive.”

Silicon Valley continues to be far ahead of other global tech enclaves in terms of the number of companies, number of deals and number of investment dollars situated in the area. While 56% of respondents believe the San Francisco Bay Area remains an important locale for access to capital and its culture of innovation and risk-taking, there are grumblings as well. The high cost of living and doing business in Silicon Valley were the two top gripes of executives, with 38% of respondents giving it a high ranking. The next complaint was competition for talent. “You’re starting to see the weakness of the Silicon Valley ecosystem,” Chaudhuri points out. “That’s also a big change.”

Other concerns include traffic in the Bay Area, high taxes and a bias against hiring or working with people who are traditionally trained or have more experience. One survey participant wrote that Silicon Valley can be close-minded when it comes to women and seasoned workers, calling these challenges “invisible hurdles” that keep many entrepreneurs on the sidelines “due to no fault of their own.”

Another respondent wrote that Silicon Valley “breeds a culture where everyone here starts thinking that the rest of the world also consumes media and technology the same way as they do in the San Francisco Bay Area.”

But the Valley’s weaknesses do present an opportunity for other cities to lure tech entrepreneurs to their borders if they can offer a more attractive environment, such as lower living costs and policies that are friendly to business, Chaudhuri says. “They need to provide the right framework for entrepreneurship and innovation to thrive,” he adds.

“The number of companies that are failing because of the ‘crunch’ that occurs when the institutional VCs fail to make … follow-on investments is massive.” –Doug Collom

As for the biggest competitive threat to a robust tech economy in the Bay Area, the high cost of living was most often cited with 28% of votes. It was closely followed by the presence of a “hostile” regulatory climate imposed by city, state and federal governments, at 23%.

Other concerns include the immigration hurdles of workers, the impasse between the President and Congress over resolving national economic issues, and access to a skilled workforce. Low in the rankings was competition from other countries such as China, India and Israel, which were only considered a modest threat at best.

Silicon Valley, for all its storied history, is not the best place for all types of technology. Other cities can offer expertise that the Bay Area cannot, experts note. “Not everything will be solved by Silicon Valley,” Chaudhuri says. For example, the health care equipment and non-grid energy industries are markets that other cities can specialize in. “You don’t expect those to come from California,” he says. “They require different conditions for optimal innovation to take place.”

Still, Silicon Valley remains far ahead of runner-ups such as Boston, Austin, Texas and the Research Triangle Park in North Carolina when it comes to attracting tech start-ups. Nine out of 10 respondents expressed medium to high confidence that growth in the area will continue or proliferate. “They think it’s still a vibrant ecosystem,” says Chaudhuri.

But what surprised Chaudhuri the most was a strong focus on expanding mainly in California and the U.S. In the survey, nearly nine out of 10 respondents said they were planning to expand in the next 12 months, with 41.7% eyeing growth plans for California and 25% targeting other U.S. states. Only 5.2% said they were looking at China, 3.1% said India and 2.1% targeted Europe. “I would have thought China, India and so forth would be much higher,” he notes.

Such an insular response troubles Chaudhuri because these young companies might miss getting an early foothold in fast-growing economies abroad. Moreover, he points out that venture capitalists do ask start-ups about their global strategies. “For them not to think about the emerging markets … is a mistake,” he says. “Different markets are blooming, so don’t miss the boat. It disappointed me, honestly, to see that.”

Download a PDF of the full report, titled “Building Bridges to Innovative Opportunities,” at the top of this page. 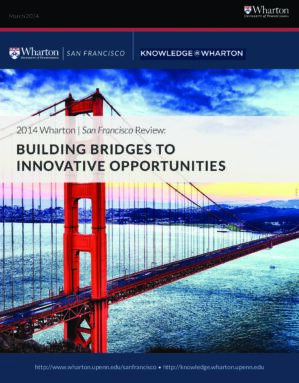