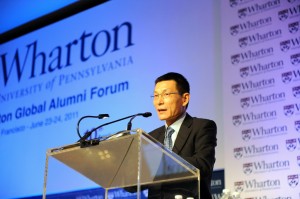 Although China’s emergence as an economic power is a hot topic around the globe, the country and its culture remain a mystery to many, particularly in the West, according to the head of one of the largest Chinese investment firms.

Speaking at the recent Wharton Global Alumni Forum in San Francisco, Levin Zhu, chief executive of China International Capital Corp., noted that, although Chinese civilization is millions of years old, the country only became a republic in 1911. And it has only been since the 1970s that the now-Communist country has been opened to the world.

“Some in the West find China almost incomprehensible,” Zhu said. “Indeed, the traditional culture and history of the East and the West are so different. People don’t even realize that when they are making arguments, they are naturally making assumptions based on their own experiences.”

According to Zhu, China has made “great progress” in terms of modernizing and overcoming problems related to widespread poverty and illiteracy among its population. But he also noted that the country is still in the early stages of becoming a developed nation. “China is listening and learning from the West and from the world,” he said. “We have many issues to deal with, including the economy and social development, which is still the most challenging task for us. There have been a lot of debates over models of economic development and changing from an export-led economy to a consumer-driven economy.”

China’s long-term growth potential, however, is rooted in the population’s work ethic and drive to succeed, Zhu said. “We’re probably facing some near-term challenges [such as] overinvestment and inflation. As for how we do this long-term in a sustainable way, in an effective way — there’s a lot to work out. But for at least the next 10, 15, 20 years, China can still continue to grow.”

As China develops, Chinese investors will look for ways to diversify their wealth outside the country’s borders, Zhu noted. His company, CICC, was founded in 1995 and is now one of China’s leading investment banks. “Our company will help [Chinese investors carry out] this diversification, and find better investments in this part of the world.”