Wharton’s Katy Milkman talks with author Annie Duke about her new book, How to Decide. 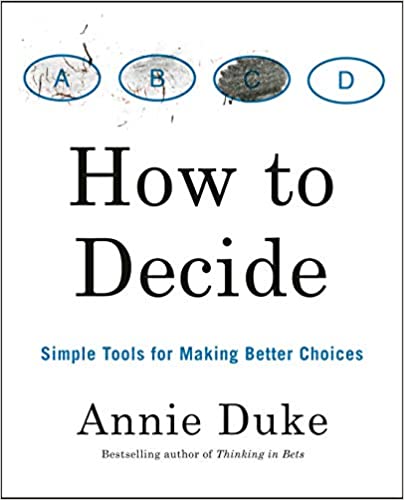 Former professional poker player and best-selling author Annie Duke knows a lot about how to make good decisions under tough circumstances. In her new book, How to Decide: Simple Tools for Making Better Choices, Duke provides a toolkit for readers who want to make smart decisions in any situation. Wharton operations, information and decisions professor Katy Milkman recently spoke with Duke about her inspiration for the book, its lessons, and the most important takeaway.

Milkman: Annie, what motivated you to write this book?

Duke: I think it starts with why I wrote my book Thinking in Bets. I became a poker player and came up against a decision-making problem that also included a mapping problem, but at super high stakes.

[In poker,] if you don’t map properly — what you think your opponent has to what they actually have, which also includes what you think about how they would react to what they have — you’re pretty much going to lose. I started to think about the way this influence of two forms of uncertainty, luck and hidden information really get in the way of our ability to learn from experience.

Thinking in Bets is a love letter to uncertainty. Then, my readers were saying, “So how would I make good decisions in those [uncertain] circumstances?”

I realized I had left this whole project on the table about what a really good decision process looks like. How do you make great decisions? And that ended up bringing me into this exploration of the hidden information problem and what you do when you’re making decisions with incomplete information. This book, How to Decide, has thought experiments and tools and checklists you can use to implement a really good decision process and understand what it looks like.

“If you want somebody’s opinion, don’t tell them your opinion first.”

Milkman: It’s a fantastic book. Which of the many lessons you share is your favorite?

Duke: This is like asking me which of my children is my favorite, which is very hard. All of them is the answer. I love them all equally.

But I think my favorite concept in the book is really simple, but really powerful. If you want somebody’s opinion, don’t tell them your opinion first. It sounds so simple and almost dumb when you hear it, except that nobody does it. When I read an opinion piece and send it [to someone else], I’ll say, “I think they’re cherry-picking the data, and I think the author is biased, and I cannot even believe that someone was willing to say this out loud. What do you think?”

We do that, not just about opinion pieces or TV shows, but also about feedback when it comes to a sales strategy, or whether we should make a particular investment, or who we should hire. We’re asking for people’s feedback, but we’re always offering the very feedback we’re trying to get from them first.

What’s your favorite thing in the book?

Milkman: My favorite thing, which is also very prominent in Thinking in Bets, is resulting. I think it’s an incredibly important concept people don’t appreciate enough. I actually wanted to ask you if you could explain resulting and why anyone who’s reading or listening to this interview should be concerned about it.

Duke: We’re always making decisions knowing very little compared to the universe of things there are to know, and there’s a lot of luck involved. I could know everything I need to know about a coin, and if I flip it, I can know for certain what the probability of each of the outcomes is. But that doesn’t mean I know it will land heads on the next flip. That’s determined by luck.

That means if I only know one thing about the chess game, which is that Taylor beat Morgan, then I know Taylor made better decisions relative to Morgan. But almost no decisions you make in life are actually of that type. They’re much more poker-like, meaning there’s lots of information you don’t have. In poker you can win with the worst hand. You can lose with the best hand.

“We’re always making decisions knowing very little compared to the universe of things there are to know, and there’s a lot of luck involved.”

The resulting problem is that we act like we’re playing chess all the time. We assume an allocator whose investments win at the end of the year must be a better decision-maker than someone whose investments lost, despite the fact that the data does not necessarily bear that out.

And we do this all the time in our lives. We take a job. We don’t like it. We say, “I was stupid to take the job.” This is one of the biggest problems that we have with learning from experience.

Milkman: That was a great explanation. It’s a really pernicious bias. Another favorite I wanted to ask you about is if you could explain the power of negative thinking?

Duke: That chapter, “The Power of Negative Thinking” — I have to say, I was pleased with myself about that, because there’s so much written about the power of positive thinking. The general, simplified idea [of the power of positive thinking] is that you imagine a positive goal and then you imagine yourself succeeding along the way to that goal, and that will actually increase your chances of success. When you imagine good things happening, it will attract those things to you. And if you imagine bad things happening, that will attract bad things.

You should have positive goals, no question. But the way to succeed is actually to think negatively. Imagine the ways in which you might fail along the way to that positive goal. The analogy I give in the book is paper maps —we used to pull out the atlas when we were on a road trip. That’s the physical instantiation of positive thinking. I look at the map and the roads are all clear; all I have to do is find the shortest way to get there or the most scenic way to get there, depending on what my values are, and I will have clear roads along the way and get there successfully.

“Your gut is not a decision tool. It’s not reliable, no matter how reliable you think it is.”

But now, nobody uses paper maps and everybody uses Waze. Waze is like the app form of negative thinking. It says, “Let me look ahead. I’m going to see where there are road closures, where there are accidents, where might there be slow traffic, and I’m going to make you avoid those things.” It’s thinking negatively, in the sense of seeing where all the obstacles are going to be and then helping you route yourself around those so that you can get to that positive goal, the destination that you ultimately want to achieve.

Milkman: Who is your ideal reader for this book? And if that ideal reader remembered just one thing, what would you want it to be?

What I really want somebody to take away from the book is that your gut is not a decision tool. It’s not reliable, no matter how reliable you think it is. Instead, what you should be thinking about is that your decisions, in essence, are predictions of the future. What you’re really doing when you’re thinking about different options is saying, “Which of these options is most likely going to result in a future that will cause me to achieve my goals?”

A crystal ball would be an amazing decision tool. Of course, they don’t actually work. So in order to start thinking about the future, you have to be much more explicit about what you think the future will hold, and you need to be thinking about that probabilistically, and not be scared of this idea of probability. Probability means there’s more than one way the future could unfold if I make a particular decision. And some of those ways are more likely than others.

I think that if you can approach probability that way, you would be a much better decision-maker for it.