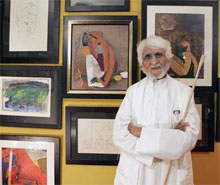 Along a corridor of the Abu Dhabi Women’s College is a broad white canvas. Hanging alone, it is a framed black sketch of a stallion, done by India’s best-known painter, Maqbool Fida Husain. A brass plate attached to the frame notes that the unique piece was done by the artist after being inspired by the work of the school’s students.

It now serves as memento of the link between the artist and the Higher Colleges of Technology (HCT) in the United Arab Emirates, the educational network of which the women’s college is a part. Following Husain’s death in a London hospital on June 9, HCT and its faculty honored the artist’s life.

According to HCT, Husain was a strong supporter of its initiatives, last visiting in March as a guest for the network’s Education Without Borders conference. He also spoke at the school’s Festival of Thinkers conference in 2009. At that event, the artist was interviewed by Arabic Knowledge at Wharton, and talked about his approach to creativity and entrepreneurship, stressing the need to constantly reinvent oneself.

Husain brought an entrepreneurial sense to his work that other artists did not, according to Tayeb Kamali, vice chancellor of HCT, and president and CEO of the Centre of Excellence for Applied Research and Training (CERT), HCT’s private education arm.

“Husain was one of the greatest entrepreneurs we had here,” Kamali says. “Think about the value his work [created] in a [field] not known for its entrepreneurship. People always look for quality work, and his art was the crème-de-la-crème — the demand that it created was proof of that.”

Kamali notes that Husain, despite his status as “India’s Picasso,” would always ask to meet with HCT students. “He said that people often think that we are inspiring [the students], but in fact it was the students who were inspiring him.”
During the Festival of Thinkers conference, Husain painted the horse sketch that now hangs at the women’s college. Kamali says he marveled at how the artist was quick to offer a painting so freely — one of his paintings, “Ganga and Yamuna,” sold for US$1.6 million at Christie’s, setting a U.S. record for Indian art — and at how effortlessly the painting was done.

“The first time we met him, he said he wanted to create his work in front of the students at the opening ceremony of the Festival of Thinkers. At the Education Without Borders conference, he said that he would draw live on the stage. It is amazing that an artist of this caliber offered to do this live … with all the cameras and the media there,” Kamali notes. “The students made up the majority of the audience who he said would inspire him — but he also inspired thousands of students.”