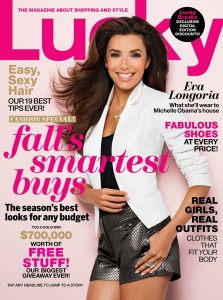 Every issue of Lucky features the tagline: “The magazine about shopping.” This month, however, the publication is starting an effort to become a retail destination in and of itself.

The MyLucky website, scheduled to launch Friday, will allow readers to browse and buy clothing and accessories from retailers including Saks, Sephora and Macy’s directly from the magazine’s digital arm. The site will also alert users when items are put on sale, and allow them to seek fashion advice from Lucky‘s editors. Magazine editor-in-chief Brandon Holley told The New York Times that Lucky expects to get 3% to 15% of the revenue from every sale.

Lucky — and other publications, including Esquire and GQ — have entered the e-commerce space at a time of declining advertising sales and circulation numbers for print media. Audit Bureau of Circulations data released last week showed that magazines saw an overall newsstand sales decline of 9.6% in the first six months of 2012, The Wall Street Journal reported.

“These magazines are already key influencers. In many ways, they probably don’t get ‘full credit’ in the current system,” Wharton marketing professor David Bell points out. “For example, if I see a great pair of shoes in GQ and go out and buy them, in the current structure, GQ gets the ad revenue from the shoe company, but no cut of the actual purchase, which they clearly influenced.”

Although overall paid subscriptions for magazines rose 1.1% during the first half of this year, Lucky‘s circulation has dropped from 1.16 million to 1.12 million over the last four years, the Times reported. And statistics from the Association of Magazine Media show that the publication’s revenue from advertising dropped 15% from the second quarter of 2011 compared to the same period this year.

Bell says efforts like MyLucky make “tremendous sense” for magazines, retailers and customers — who, he notes, already see the publications as reliable sources of information on the latest styles. “The ability to add transactions on top probably further deepens the customer relationship. That is, customers make the attribution that Lucky is not only curating and helping, but also making it seamless for them to obtain the recommended items.”

While Wharton marketing professor Barbara Kahn notes that e-commerce efforts by media sites are a growing trend, she adds that publications need to tread carefully. “As a source of information about a product, a magazine serves the purpose of being an ‘independent’ expert that can not only expose consumers to new products, but also validate their quality,” she says. “When Lucky moves to selling the product as well, that relationship can be tainted. In other words, if I think you are going to make money off me, can I trust your advice?”

Kahn adds that currently, Lucky is simply promoting or providing information about products — as it moves toward taking on more of a merchant’s role, the publication also has to establish itself as credible in terms of pricing, delivery and customer service. In addition, the magazine could lose some of its authority with some consumers or other retailers.

“Historically, at a newspaper, the editorial and advertising departments were completely separate, and reputable media outlets made sure that no advertising revenue would affect their editorial integrity,” Kahn says. “When media companies start selling items from the pages of their editorial content, this separation is lost, and with it, goes any semblance of impartiality.”