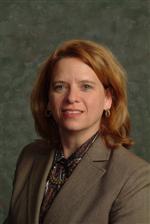 Karen Schmitt isn’t quite sure how a theatre geek with a knack for math wound up becoming an actuary and rising up the ranks of the reinsurance industry. Schmitt, president of Maiden Reinsurance Company, attributes her success to a combination of “hard work and dumb luck…. I’ve loved every job I had,” she said at a Wharton conference for alumnae held earlier this month.

Unlike today’s workers who are expected to change careers multiple times, Schmitt has remained in the same industry since she graduated from Lebanon Valley College, where she was married during her freshman year and had a baby during her junior year.

When she was studying for tests, she recalled reading aloud to her son from actuarial textbooks, taking the notion of multi-tasking to a new level. “He was so young, the words didn’t matter. He just wanted to cuddle and watch my expressions.”

When Schmitt graduated in 1980, not many students majored in actuarial science, as she did. “I had two interviews a day for a week. I finally took the best offer, [which was] in Central Jersey with Prudential Property and Casualty, starting at $10,000.”

Six years later, Prudential transferred her to Mansfield, Ohio, to open a new office, a move she considered the most difficult in her career because she felt unqualified for the position and, in addition, she had to relocate her family. “I had no business being in that job. It was management by fire.”

In the following years, a number of reinsurance companies changed hands, and Schmitt changed with them. In 1999, she joined GMAC Re, becoming COO. When the recession hit, GMAC’s mortgage division incurred large losses. As a result, GMAC decided in 2008 to sell GMAC Re to Bermuda-based Maiden Holdings Ltd. Schmitt stayed on, becoming president of the U.S. subsidiary and maintaining the company’s presence in Mount Laurel, N.J.

Maiden Re was recently named one of the best places to work in the reinsurance industry.

Schmitt decided to get an MBA from Wharton when she was in her early forties even though her career was clearly established. “I did it not so much to help my career or for the degree, but for a learning opportunity.”

One thing she hasn’t learned to her satisfaction — and which she encourages others to master — is the art of accepting a compliment. “That’s still tough for me. But if you are going to move up in an organization, you’re going to have to take credit — or somebody else will — and say, ‘Yes, I did that.’”

The downside to being at the top of the company is lack of peers and feedback, Schmitt acknowledges, although she does appreciate the freedom of setting her own schedule, particularly now that she has grandchildren.

Looking back, she does not see a perfectly balanced life between work and family. “It was never really balanced. You do the best you can. No question, I worked a lot. My generation didn’t strive for balance as much. On the other hand, when you left the office, you left it. You weren’t tied to a cell phone 24/7.”