Investors are grappling with unprecedented uncertainty in the markets. But Wharton professor emeritus of finance Jeremy Siegel is still betting on stocks for durable returns.

Siegel revisits fundamental issues related to investing in the forthcoming sixth edition of his book Stocks for the Long Run: The Definitive Guide to Financial Market Returns & Long-Term Investment Strategies. Since the book was first published in 1994, it has served as a guide to stock trading with insights and tools for traders.

At the 2022 Frontiers in Quantitative Finance Conference in September, hosted by Wharton’s Jacobs Levy Equity Management Center, Siegel shared insights from the latest edition with Jeremy Schwartz, global chief investment officer at WisdomTree Asset Management. “The long-term real rate of return from investing in stocks is remarkably durable,” he said. He also talked about how and why the real rate of return from bonds is declining, the Fed’s missteps regarding inflation, as well as the decline in value investing and the near disappearance of factor investing.

Jeremy Schwartz: There is a lot of new material in your book, but is the central premise in 2022 still stocks for the long run?

Jeremy Siegel: It’s interesting because the first edition, which came out in May 1994, used data through the end of 1992. The long-term real return (net of inflation, from investing in stocks) 1802 onward was 6.7% in real terms. I updated it till June of this year and it’s 6.7% real — exactly the same as the last 30 years, despite the financial crisis, COVID, and so forth. It’s remarkably durable. We also know returns from investing in stocks are remarkably volatile in the short run. But the durability of the equity premium (or the excess return from stocks over a risk-free rate like a Treasury bond) is quite remarkable.

Schwartz: One of the big new chapters in the book, and arguably the most important thing arguably for the market this year, is the real rate of return on bonds. Talk about the historical equity risk premium and what is driving bonds lower, and for longer.

Siegel: What I find and others have found — although sometimes I don’t know whether the Federal Reserve recognizes it — is how much of a drop we have seen in real interest rates. I’m looking at TIPS bonds (Treasury Inflation-Protected Securities) as a global phenomenon. TIPS were floated in the U.S. in January 1997 at 3.5% real [yield]. In 2000, they went to almost 4.5% real. By the way, that was the real rate around the world — 4% to 5% real ex-ante (based on the expected inflation rate). Until the latest tightening, they were all negative.

“The durability of the equity premium is quite remarkable.”— Jeremy Siegel

[Another factor] is increasing risk aversion. Maybe an aging population that holds wealth becomes more risk-averse. The biggest factor is the tremendous flip in the correlation between stock and bond returns. During the fifties, sixties, seventies, and even the early eighties, the beta was positive for bonds and stocks. Since the nineties, it went to zero, and then it went negative. A negative beta asset will have a lower rate of return — and Treasuries are negative beta assets. Now they’re not this year, but they’re correlated with stocks.

In the past, during all the crises — the financial crisis and the COVID crisis — Treasuries were up. Whenever there’s a shock to demand and stocks go down, Treasuries go up. Factor in a negative beta from a positive beta — the return goes down as it should, and that’s a major factor. So, you have all these factors that are making for the decline in the real yields, and it’s quite persistent and quite worldwide.

Outlook for Returns on Bonds

Schwartz: What is what is your expected return for bonds going forward at 1% on the 10-year TIPS?

Siegel: Just before TIPS came out [in 1997], I got a call from the media and they said, “Dr. Siegel, the Treasury is going to float TIPS. What do you think they’re going to float at?” I said, “I guess 3.5%, that’s their 150-year average.” And indeed, they floated at 3.5%, and then continued to rise for the next three and a half years.

We were late as a country coming to TIPS. Most other countries in the world had them — even European countries that did not have systematically high inflation. But the TIPS [return] steadily went down 20 to 30 basis points a year, down to -1%, and -1.5% at one point. Actually, you can almost explain the whole decline in the stock market just by the rise in TIPS. It’s not that earnings have changed; the discount rate is changing, the real rate is going down. The market thinks the Fed has to produce a really strong real rate to stop inflation.

What is the real rate going forward? The nominal Treasuries are at 3.5%. If you think the average rate of inflation is 2.5% to 3%, you get about a half percent on that [as the return]. My feeling is that the short-term real rate is minus 0.5%.

“[The Fed thinks] that they have to tighten money supply a lot more to get a pinch on the economy. If they tighten too much, they’re going to precipitate a recession.”— Jeremy Siegel

Schwartz: You came into this year as the most hawkish on the street, calling for the most aggressive rate hikes. Federal Reserve chairman Jay Powell has said money supply has not been predictable of inflation. You have the exact opposite view. What’s he getting wrong?

Siegel: I’ve been calling Jay Powell’s monetary policy the third worst in the 110-year history of the Fed. I may actually raise it to the second worst, but we’ll see what happens. The worst, of course, is the Great Depression, where they let all the banks fail when they were actually formed to prevent exactly that from happening. When the pandemic hit and money supply exploded, I said this is going to cause inflation. You’ve never seen that 25% M2 money supply increase — 1870 onward, there has never been a money supply increase that fast.

I said this is just absolutely crazy. This is going to produce a tremendous amount of inflation. And it did.

I was definitely hawkish [early this year], saying there would be eight increases [of 0.25% each] — that’s 2%. But now they’re talking about 4% by year-end. That’s 16 increases. In the September 2021 meeting … eight of the 16 FOMC (Federal Open Market Committee) members said there was no need to increase rates whatsoever this year. This was when inflation was already heating up; speculation was rampant in all asset markets. Five members said we will need an increase of 125 basis points. And three — the most hawkish — ventured that we might need an increase of 50 basis points by December this year.

What upsets me so much about this policy is, okay, Jay Powell is not a great economist; but no other FOMC members dissented. The staff said there’s not going to be an inflation [spike] and everyone bought it. It shocks me that lessons were not learned and that maybe one or two of them said this is crazy. We all know they were buying mortgage-backed securities in the biggest housing boom in history. The policy that was followed was, in my opinion, inexcusable.

“It shocks me that lessons were not learned.”— Jeremy Siegel

Schwartz: There’s a lot of talk about factor [investing]. You have four new chapters on value investing. Did you want to give an update on what you thought about?

Siegel: I expanded the sections on value and size premiums. And in bowing my head to [economist] John Cochrane, I have a chapter called “The Factor Zoo,” where I talk about momentum and all the other factors. What I found is how much things have changed since 2006. In the last 15 years, there’s been virtually no factor effect. I’m not saying that’s true in every market, or in every single time period, but what has happened is really stark.

We all know that value and size [as factors in investing] haven’t worked. Even momentum [investing] is level. The crash in value stocks started with the financial crisis and it hit the banks, and that put them behind. Now, we have had a resurrection this year, certainly in value stocks, but it has only retraced half of what they lost over the last three or four years. This trend was around the world, although it was not as strong as in the U.S. Emerging markets were the only ones that actually retained a lot of the factors. 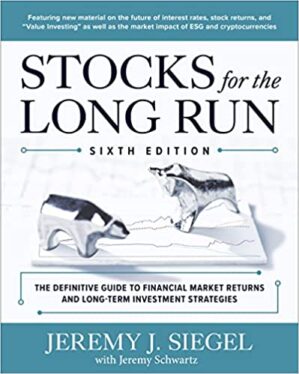 Get Stocks for the Long Run, by Jeremy J. Siegel