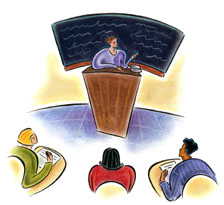 Investors in the Middle East looking to add to their regional portfolio may want to consider buying into a private education firm in Saudi Arabia. According to a new study by Booz & Company, paid annual tuition fees for private schools in the Arab Gulf will more than triple to almost US$17 billion by 2020.

Illustrating the draw of private educators in the region, former U.S. President Bill Clinton was in Dubai this week to launch the Varkey GEMS Foundation in Dubai, a philanthropic effort of GEMS Education chairman Sunny Varkey. Varkey is among the richest Indian expatriates in the Gulf, and his private school operation is considered the largest in the world.

The Booz report suggests that population increases and a lack of quality in government schools will push more students into the region’s private education sector, already one of the largest in the world. But more importantly, parents told researchers they would be willing to pay more for education.

“The overall operating environment for private schools does not yet attract local and international investors in sufficient scale to develop the market,” the report notes. “Some institutional investors have begun to express interest; however, thus far these players have been limited to private equity funds and others with existing connections in the region.”

The biggest opportunity in the Arab Gulf is the Saudi Arabian private education market, the Booz report says, as only 14% of students there are enrolled in private schools. The Kingdom is also investing in school construction as part of social spending programs resulting from the Arab Spring.

Other education consultancies have made similar analyses. According to Sammon Group, which builds educational construction projects, 6,200 schools will be needed across the region to accommodate its future student population. Another consultancy, The Parthenon Group, recently authored a report on investment opportunities in K-12 and higher education in the United Arab Emirates and Saudi Arabia. They estimated investment opportunities in regional K-12 could near US$3.5 billion in 2012, and US$1.2 billion in the higher education sector.

“There is a clear trend toward private education and a preference for international and mixed curriculum schools because students choose education in English at both secondary and tertiary levels,” stated Karan Khemka, partner and head of the consultancy’s emerging markets practice, in a release.

Much focus has been paid to the effort to improve higher education in the Arab Gulf, as oil-rich countries splash out billions on bringing the biggest names from America and Europe to their countries. The UAE has funded the Sorbonne and New York University to set up campuses in Abu Dhabi, while Qatar has gathered well-known American universities, from Weill Cornell Medical College to Northwestern University, in an ‘Education City’ cluster inside its capital of Doha. (Arabic Knowledge at Wharton is based in Abu Dhabi, in facilities provided through a partnership between the University of Pennsylvania’s Wharton business school and CERT, Abu Dhabi’s Center of Excellence for Applied Research and Training.)

According to a report by the Institute of International Education and the Lebanese Association for Educational Studies, there are now 7.6 million higher education students in the region, up from 2.9 million a decade ago. In that same period, the number of universities in the region grew from 174 to 467 today.

But would-be education investors should pay heed to the failures in private education that have already happened in the Gulf. Virginia’s George Mason University shuttered its campus in 2009 when it didn’t reach enrollment targets, and Michigan State soon after closed most of its Dubai satellite campus after losing millions.