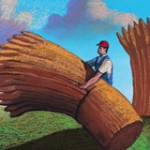 Late last year, Deepak Parekh, chairman of the Housing Development Finance Corporation (HDFC), told a panel discussion at the Center for the Advanced Study of India (CASI) at the University of Pennsylvania that the Mahatma Gandhi National Rural Employment Guarantee Act – the federal government’s flagship employment scheme — was a recipe for disaster. The program guaranteed 100 days of employment to a rural household at Rs. 100 (approximately US$2) a day. As a result, many workers preferred to stay back in the villages and take advantage of this subsidy rather than go to the cities for work. These numbers are high: According to the 2007-2008 National Sample Survey Organization report, there were 326 million migrant workers in India, or 28.5% of the population. Particularly affected were the construction and infrastructure sectors.

Now, Parekh and economists like him have another reason to worry. The Union cabinet has just cleared the Food Security Bill, which states that “every person belonging to priority households… shall be entitled to receive 5 kilograms of foodgrains per person per month at subsidized prices.” According to initial indications, the grains will be made available at between Rs. 1 (1.7 U.S. cents) to Rs. 3 (5 U.S. cents) a kilogram.

The Bill was passed through an ordinance in early July. This means that it requires only the assent of the President of India to pass into law; there will be no debate in Parliament.

The numbers involved are much larger than the migrant issue that was perceived as an economic albatross. This is the biggest such program in the world and will cost the government about US$22 billion annually and cover 67% of the population.

On a moral plane, food security is unexceptionable. Even the Opposition parties have been circumspect in their criticism. Rajnath Singh, the president of the Bharatiya Janata Party (BJP), has dismissed it as an election gimmick (general elections are due in 2014) and wondered why the ordinance route was preferred to the more normal debate and Parliamentary approval. The BJP cannot be seen to be opposing a move that benefits so many.

Even the United Nations has come out in support. Olivier De Schutter, UN special rapporteur on the right to food, told a media meeting in Delhi that the bill has global significance. “I believe it is an important movement for the right to food in India,” he said. “It can inspire many countries to do the same thing.”

The real opposition comes from the economists and analysts. According to a report by Japanese financial services group Nomura, “while this bill is justifiable on welfare grounds, the macroeconomic implications are quite significant…. India’s current macroeconomic position does not provide the space to implement this policy. ” In other words, this is a policy only on paper.

The Indian economy is going through a slowdown now. India’s GDP growth in 2012- 2013 — at 5% — is the lowest in a decade. Current account deficits have ballooned thanks mainly to gold imports. And the rupee is hitting all-time lows against the dollar in excess of Rs. 60. If the food securities bill is implemented, it would raise the government’s food subsidy burden to an estimated 1.0% to 1.2% of GDP per annum from the 0.8% currently, says Nomura.

“This will have far-reaching economic implications,” says a report by HDFC Securities. “This brings the rating agencies that much closer to a downgrade of India’s rating.” The agencies have been threatening downgrade for some time now.