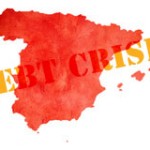 It was not supposed to work out this way. Spain’s strict austerity budget, topped-off with an additional round of deep spending cuts in recent weeks, was intended to shore up investor confidence by showing that the government was corralling its budget deficit. Meanwhile, eurozone governments were pumping some $1.33 tillion (1 trillion euros) into weak European banks, including Spanish banks, to restore financial order and, hopefully, to encourage more business lending.

But so far the moves seem to be backfiring. In just a couple of months, talk about Spain has turned from setting the stage for recovery down the road to either a possible sovereign debt default or an enormous bailout to prevent one. In other words, the ongoing European financial crisis, which seemed to be on sabbatical for a while, has returned, even though finance leaders set up huge bailout funds that they expected to insure against a new market crisis so soon.

Spain is particularly important because sovereign troubles there would swiftly spread to other peripheral eurozone countries, such as Italy and Portugal, and related banking problems would quickly infect the rest of Europe and move on to the United States. That would threaten to derail a fragile economic recovery there and in the rest of the world, not to mention risking another full-blown global financial crisis. What’s more, unlike Greece or Portugal, it is understood that Spain’s (like Italy’s) economy is too large for a bailout once a crisis would pass a critical point, so heading off problems early is crucial to preventing global contagion.

The epicenter for the latest financial tremors is Spain’s 10-year benchmark government bond, the yield of which is widely accepted as a barometer of Spain’s financial health and investor anxiety. The rate has been on a roller coaster during the last year. By November, the rate had hit 6.8%, uncomfortably close to the 7% level where other eurozone governments have been forced to get bailouts to prevent a financial death spiral. After Spain reached a new, austerity-driven budget agreement, and eurozone officials increased potential bailout funds for banks up to 1 trillion euros in December, the 10-year bond rate dropped to 4.8%. But even after following such huge efforts to impose rate stability, the rate has been inching up, and on Tuesday the yield soared above 6% for the first time since the budget and emergency fund steps were taken. (On Wednesday it closed down at 5.84%.)

The new surge in yields on Spanish bonds is exposing the underlying challenge of monetary union, where countries lose direct control of natural economic stabilizers, such as a national currency and interest rates. Now, “Spain will have to consider defaulting, says Wharton finance professor Franklin Allen.  “It may prefer to go the EFSF/ESM (European Financial Stability Facility/European Stability Mechanism – two related bailout funds) route for political reasons, but economically they would be better to get rid of the debt now.” Had Greece defaulted in May 2010, “they would be much better off today.” But if Spain starts to substitute public debt for existing private bank debt, it will become much more difficult for it to pull off any default that could become necessary to salvage the economy. What’s more, “at some point they will need to consider leaving the eurozone in order to start growing strongly again.”

So Spain’s “severe challenges” are now at the center of the eurozone crisis, replacing those of Greece, Allen points out. Unemployment in Spain is near 24%. Youth unemployment is over 50%. “One begins to wonder where the political limits are. Will the politicians be willing to go to 30% or 35% unemployment, and 60% or 70% youth unemployment?” In the face of budget slashing of 5.5% from now through 2013, such unemployment levels “seem quite possible and the potential long-term term consequences are very worrying. What is disheartening is the apparent lack of concern in Northern Europe and in Brussels about this economic disaster. There seem to be very few proposals to improve the situation other than austerity and more austerity.” Where Spain’s GDP grew by 3.7% annually on average from 1999 to 2007, it has been averaging -1.0% annually since then. This week, Spain announced that industrial production in February had plummeted by 5.1%, compared with the same 2011 period.

In Allen’s view, current policies have failed in Europe, and “unfortunately, very few people are willing to say that.”

How did Spain get into such a tight position? Cheap credit, much of which was provided by German banks, led to a real estate bubble in Spain, perhaps even larger in relative terms than the one in the U.S. As Allen explains it, when the real estate bubble burst, it “devastated Spain’s construction industry and that was the initial cause of the high unemployment.” It was that collapse and the slowdown in the economy that then “wrecked previously strong public finances.” At the time the bubble burst, the Spanish government had no public debt at all.

Social safety net expenditures and plunging revenues in the resulting recession created a budget deficit. Now Spain is having “considerable trouble cutting public expenditures, and last year missed its deficit reduction target by a large amount,” Allen says. “This means they have to cut even more this time. However, this austerity will probably exacerbate all their problems. Many of the Spanish banks are in trouble, particularly in the Caja (regional bank) sector. Property prices have not fallen much yet in comparison with Ireland or the U.S., for example. This is where I think a significant danger lies.”

Ireland’s experience in the crisis stands as a severe warning. Allen points out that the Irish government, which had very little sovereign debt at the start of the global financial crisis, took on a huge bank restructuring when the banks there got into deep trouble. Bailing out that private bank debt (transferring private debt to public debt) cost the government the equivalent of 32% of GDP. Markets, quite rationally, fear that Spain may bail out its banks just as Ireland did, and that would water down the value of existing Spanish bonds. Worries about this are depressing bond prices, which has the effect of raising the yields needed to attract anxious investors (there is an inverse relationship between bond prices and yields). The euro zone-engineered LTRO (long-term refinancing operations), which pumped huge amounts of euros into European banks, “had good short-term effects but the risks involved may now become apparent. Spanish banks bought government debt with the LTRO money, and those prices are now falling, putting the banks under pressure.”

It’s a vicious circle. The eurozone provided funds to banks, which used most of the money to buy up European sovereign debt at a time when high market rates were making it difficult for countries like Spain and Italy to finance their debt. The banks’ bond purchases had the effect of reducing the yields on the sovereign bonds, making external financing more affordable for Spain, for example. But now, all of the budget-cutting austerity is slowing many European economies so much that investors worry whether countries like Spain will have sufficient revenues to meet their bond debt obligations. This has the perverse effect of reducing the value of the sovereign bonds held by the banks, weakening the banks – and their ability to lend to businesses — which further hurts the economy and fuels the downward spiral.

Expect spillover effects: Higher yields will be demanded on bonds from other European economies, says Allen. In fact, that is already occurring in the case of Italy. “Also, Germany is gradually sucked into a position where its government may face a large loss on its eurozone involvement. The rise of the Pirate party is an interesting symptom of some of the political problems to come in Germany if that happens.”

For more on the question of Europe and austerity, see this exclusive Knowledge at Wharton interview with Christine Lagarde, managing director of the International Monetary Fund.