Wharton’s G. Richard Shell talks about how employees and managers can stand up for their values and create a more ethical workplace. 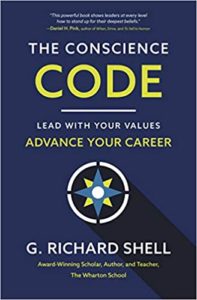 They are young people who earned their bachelor’s degrees and landed a great job only to fall into an ethical or moral trap set by a boss, a co-worker, or the company culture. Sexual harassment, discrimination, fraud, lying, cheating, peer pressure — the list of unsavory and illegal behaviors goes on.

Some were able to push back; others were fired or retaliated against for bucking the system; many went along with it only to feel guilty and quit. Disillusioned by the cultures they had encountered at what they thought would be “dream jobs,” more than a few headed for the safe harbor of graduate school to figure out what would come next.

Inspired by their real-life conflicts and wanting to help, Shell, chair of the School’s Legal Studies and Business Ethics Department, wrote The Conscience Code: Lead with Your Values. Advance Your Career as a practical guide for handling the sticky ethical situations that can arise in the workplace. Drawing on both research and the real lives of his students, the book provokes readers into thinking more deeply about the consequences of their actions — or inaction.

“Good people are put in bad situations, or they navigate to bad situations without knowing quite how they got there. Then they have to decide how they’re going to respond,” said Shell. (Listen to his full interview with Knowledge at Wharton at the top of this page.)

Ultimately, Shell wants anyone who is dealing with a moral dilemma at work to have no regrets. He wants them to be a “person of conscience” and act accordingly. Importantly, this includes small, everyday issues like honesty on expense accounts and billing records, not just flagging a major accounting scandal.

“I deliberately chose that term, as opposed to the more alarming ‘whistleblower’ or anything that suggests that you have to be a moral hero or throw yourself over a cliff,” he said. “To be a person of conscience — to bring your conscience to work, to bring your values to work and make a commitment to acting on them — is an essential leadership skill.”

10 Rules of the ‘Conscience Code’

The book is organized into 10 chapters that serve as rules of engagement for creating a conscience code. The rules help readers approach conflicts with a methodical strategy for resolving problems, rather than rushing in with righteous indignation or giving in to the temptation to look away.

For example, Chapter One is “owning the conflict,” which Shell believes is the most difficult part of the process. A worker sees a systemic problem, such as a pervasive practice of inflating expense reports, and rationalizes inaction: Everybody does it. It’s a little thing. Nobody will care. Don’t make trouble.

“Of course, it’s when you don’t make trouble for yourself that you’ve just denied your values. And whether you know it or not, you’ve left a little scar [indicating] that your values aren’t worth speaking up for,” Shell said, noting the slippery slope that follows. “The next time it happens, that rationalization you listened to the first time becomes easier to follow. Then it gets harder and harder and harder to draw the line where action is required.”

In Chapter Six, Shell explores the benefits gained by “leveraging the power of two.” That means finding an ally — a trusted manager or influential co-worker — who can collaborate on a solution. An ally can lessen feelings of isolation and counteract the “gaslighting” that can happen when a moral person is pressured by those who are behaving badly.

“One of the biggest patterns I recognized in the stories that my students have shared is that when they’ve been unsuccessful at managing these conflicts in a way they’re proud of, it’s when they tried to do it alone,” Shell said. “The power of two gives you that confidence to move forward.”

Shell acknowledges the risks in pushing back against an unethical culture. People who push back risk being fired, demoted, blackballed, and threatened for standing up. But he believes there is a longer-term personal cost in slinking away from the problem. People of conscience bring their ethical standards to the office every morning, he said, so they can look themselves in the mirror at night. In addition, putting up with a toxic work culture inevitably takes its toll on wellbeing, as anxiety and fear replace the positive motivations that lead to great work.

Take former NFL quarterback Colin Kaepernick, for example. His sideline protests against racial injustice cost him a lucrative career in a league that embraced those values just a few years later amid mounting public pressure.

“Sometimes you have to break a few eggs if you’re going to make an omelet,” Shell said. “If you ask Colin Kaepernick, ‘Did you make the right decision?’ I think he would say, ‘Absolutely. I’d rather have taken that stand and been an agent of change for the NFL than to have kept my mouth shut and just put up with the racism that I saw going on all around me.” Kaepernick paid a price, Shell noted, but that price is the true test of what his values are worth to him as a person of conscience.

“I like to tell my students: If you want to stay healthy, don’t go swimming in a dirty pond.”

Look Before You Leap

One of the best ways to steer clear of ethical quandaries is to avoid working for a company that allows unethical practices to flourish. But it can be hard for job candidates to ascertain the culture before setting foot in the door. Shell offered a couple of tips:

Mind the Metrics: If outcome-only metrics dominate over other kinds of performance measures such as customer engagement and satisfaction, there is a higher risk for corruption. Combine that with aggressive quotas, fierce deadlines, and bosses under relentless pressure to “deliver,” and you might want to look elsewhere. These ingredients create toxic, not value-based, workplace cultures.

Be Curious: Don’t just talk to the recruiter or hiring manager. Seek out former employees who can give an honest account of the workplace. Ask the right questions and listen to what is said — and what is unsaid. Do values really matter, or is the firm just paying lip service?

“None of us can read other people perfectly, and organizations have branding consultants that burnish their ethical credentials,” Shell said. “I like to tell my students: If you want to stay healthy, don’t go swimming in a dirty pond.”