Filmmaker Murray Nossel explains the benefits of a well-crafted narrative for businesses. 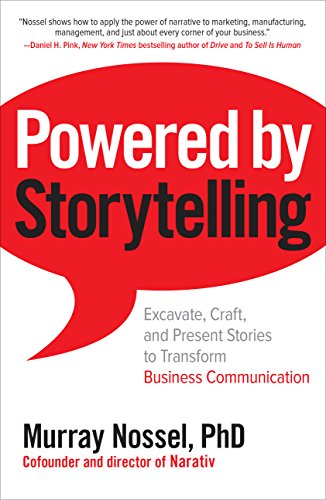 The art of storytelling is getting lost in the era of instant digital communications. But it is a vital skill that has served society well since ancient times and it can be retaught. Murray Nossel, an Oscar-nominated documentary filmmaker, explains why a good narrative has the power to transform businesses in his book, Powered by Storytelling: Excavate, Craft and Present Stories to Transform Business Communication.

Nossel also is an executive coach at Columbia Business School and co-founder of Narativ, which teaches storytelling techniques to executives. His clients include Disney, Time Warner and Radisson Hotels. Nossel recently joined the Knowledge at Wharton radio show on SiriusXM to talk about his book.

Knowledge at Wharton: Why is storytelling so important?

If you think about the basic needs of food, shelter and clothing, we needed to be able to communicate and pass on information about how to secure these kinds of things. Storytelling evolved in the human species to do that, and it has continued to evolve. Now we’re passing on tremendously sophisticated information to one another, not only to our next of kin but oftentimes to the world.

Because it’s a hard-wired brain function, it’s the most powerful way of communicating messages to other people. Storytelling not only involves the intellectual function, but it also touches something much deeper inside of us, which is the heart. It’s something that connects mind to heart. That’s why it’s such a powerful mode of communication.

Knowledge at Wharton: Is storytelling a skill that has been lost?

Nossel: Yes, it’s been lost by many people because we often live in the illusion that we are connecting with and communicating with other people in a deep fashion because we have the ability to communicate instantly with one another, let’s say through a text. But is true connection really happening here? I would say not. The other thing is, you can put up a bunch of stuff on your social media page and say, “Well, that’s my story.” But is it actually a story? No, it’s an assembly of data about yourself that people can construct into a story if they like. But it’s not necessarily a story.

So yes, I think we’ve lost our natural inclination to be able to tell stories. But this can be retaught because the hard-wiring and the pathway is already there in the brain to be able to do so.

Knowledge at Wharton: How does storytelling integrate with business?

Nossel: I think it’s tremendously impactful on business. I’m just thinking of a very recent example of Mark Zuckerberg’s testimony before Congress. I’m not talking about his personality, I’m just analyzing the transcript of the testimony. If you scour through that transcript, you’ll see that there’s basically one story being told: the personal story of how he invented Facebook in his dorm room. There’s another kind of inferred narrative that, yes, he created it in his dorm room and he has now turned into a billionaire mogul who’s CEO of Facebook. Well, that’s a story that he’s telling us. What he has to do before Congress is to convince Congress, and the rest of the world, that he is trustworthy.

How trustworthy is that particular narrative? What do we take away about his values and the values of Facebook if we just look at that narrative on its own? It’s too basic a narrative. What he needs and what his business needs now is a much more sophisticated narrative that will help us truly reconnect with and trust him and this brand again.

“We’ve lost our natural inclination to be able to tell stories.”

The more sophisticated we become in our communication and the more we are subjected to people transmitting messages, the more skeptical we become about what we’re actually hearing. If you tell a fact-based story just recounting the events of what happened, and you do that skillfully, we are more inclined to trust you and to believe in what you’re saying and to support your business. Messaging and the way that leaders represent their businesses is of crucial importance. That’s why you’re seeing Harvard Business Review running articles about the importance of storytelling for leaders, for instance.

Knowledge at Wharton: Do companies realize that correlation between storytelling and the bottom line?

Nossel: No question about it, companies are increasingly recognizing how storytelling affects their bottom line. For example, one of my clients is Craig Kostelic, who’s one of the chief business officers at Conde Nast publishing. Craig, who used to be in charge of the food innovation group, has been given three other publications, so he now has four separate brands to bring together. He has to be able to sell this combined brand, which is now called a lifestyle brand, to the companies that advertise in Conde Nast publications. He has to be able to come up with a new story about what the merger of these brands means. The more able he is to come up with a narrative that connects the dots of these different brands, the more people are going to be convinced that he has something coherent.

Once again, the brain evolved to be able to make experiences coherent for us, and that’s what we’re searching for as humans. The storytelling has a bottom-line effect not only for the relationships between the company and its consumers, but also for those who are working within the company. For them to stay motivated and clear about the message, they need to know what the story is.

Knowledge at Wharton: It seems that effective storytelling needs to be top down.

Nossel: Yes, it has to originate at the top. Someone at the top has to decide that the story is important and has to disseminate right throughout the company. But it also has to happen after that from the bottom up. Again, look at Facebook. The mission of the company is for people to be able to connect with those around the world. For me, it would be important for every single member of Facebook who works there to own that mission. Everybody in a company needs to find their own story of connecting with the mission, and that’s the way that mission is truly going to be radiated out into the world. But you are quite right, if the impetus does not come from the person at the very top, it will not work because this approach to storytelling has to be authorized by the person at the top.

Knowledge at Wharton: Does the size of the company matter?

Nossel: I’ve got a perfect example here of a new clinic that is being established in New York City. They have a small staff of 18. The doctor, who is also the director of this clinic, has very smartly asked me to come into this company (to help). He says, “Before we open the doors, I want absolutely everyone to be on board with what our message, our mission, our values are.” They are going to use that as a way of creating the culture of the organization. When we establish that connection with our clients, no matter how big or small we are, we are strengthening and constantly in a process of iterating and innovating our culture and making it more and more identifiable to those outside.

“Companies are increasingly recognizing how storytelling affects their bottom line.”

Knowledge at Wharton: What happens when the message changes or somebody is not staying on point?

Nossel: That’s why this takes practice. If you don’t spend some dedicated time and space, and if you as a company don’t recognize the importance of doing this, you fall into the dangerous zone of putting out messages that are erroneous and might even be destructive to your company. That’s why I recommend very highly that companies both large and small create dedicated times and spaces where people sit around and think about the story that they’re going to tell, and they practice telling that story with one another.

The one thing that I must add is that kind of storytelling can only take place in the context of open and nonjudgmental listening. That’s the reason why I always train people first to be able to listen openly and without judgment, and then to tell their stories. That way, you feel absolutely free to tell a story rather than feel constrained by other people’s scrutiny and judgment. But you need to carve out a time — whether you are an individual, a small team or a large team — to devote to the way that you are disseminating your messages through storytelling.

Knowledge at Wharton: How does this play a role in the field of medicine?

Nossel: It is both a good thing and a bad thing that medicine has become increasingly specialized. There are so many tests that you can do now to see what’s ailing a person. But what’s been lost in the process is that thing that we used to call the bedside manner, the art of diagnosis, the art of being able to connect with a patient and to ask that little question that unlocks a problem.

I can give you a perfect example of my very own doctor. I go see this doctor for the very first time in New York City, and I’m kept waiting a little longer than is comfortable for me because I have to get back to the office. I am furiously typing away on what was then my BlackBerry. Finally, I go into the doctor’s office and I’m just seething. I say, “You kept me waiting for so long.” And he says, “Oh, I’m so sorry about that. This is a big problem. But never mind. Sit down.” He spent an hour listening to my history. Well, that’s why the guy was running so late.

“Storytelling not only involves the intellectual function, but it also touches … the heart.”

Anyhow, in the process of listening to my story he says, “So, you’re from South Africa?” I say, “Yes, I am.” And he asks, “Which part?” I say, “Johannesburg, but I lived in Cape Town for a while.” When I tell most people that I lived in Cape Town, they say, “Oh, what a beautiful city. I’ve been there. It’s incredible. I’ve heard it’s incredible. I must go there.” Whether it’s a doctor or anybody, that’s how they normally respond. But he says to me, “Oh, you grew up in South Africa. Did you spend a lot of time in the sun as a kid?” I said, yes. Then he asked when I last had a dermatological check-up. I told him that I hadn’t had one quite a while. He said, “I’m making an appointment for you to go for a dermatological check-up right away.”

He didn’t even examine my skin. He just diagnosed that on the basis of carefully listening to my story. He was listening for what wasn’t obvious. Do you know that I went to the dermatologist, he found on me a malignant melanoma. It was still in the outer skin, but if it would have penetrated underneath that, I wouldn’t be speaking to you right now. It’s because of his careful listening to my story that he actually saved my life. That’s just a very nuts-and-bolts example of how important storytelling is in medicine.