How 'Scroogled' Could Hurt Both Microsoft and Google - Knowledge@Wharton

How ‘Scroogled’ Could Hurt Both Microsoft and Google 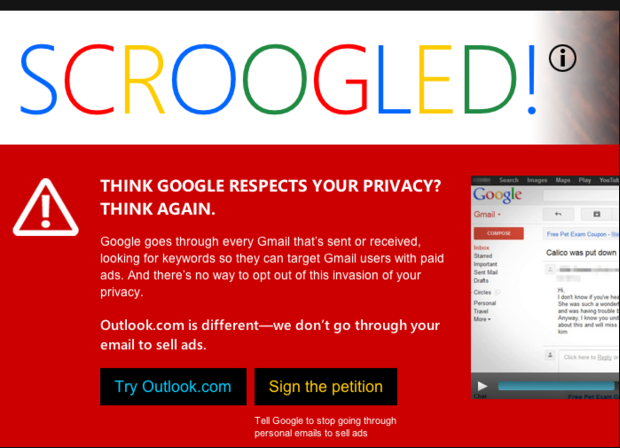 Although Microsoft has taken some flak for its anti-Google “Scroogled” marketing campaign, urging consumers to abandon the search giant’s services for its own, the company has no intentions of backing off.

Rumors surfaced this week that Microsoft might be halting its efforts, aimed at getting users to switch to the company’s Outlook e-mail service and Bing search engine by accusing Google of playing fast-and-loose with consumers’ privacy. But a company spokesperson told news outlets that, while the TV ads would come to an end, Microsoft was simply moving to a new phase in the campaign and that it would go on “as long as Google keeps Scroogling people.”

But is Microsoft only “Scroogling” itself with such a negative campaign, as some observers have suggested? While Wharton marketing professor Patti Williams says that such campaigns can backfire, she also notes that “I suspect Microsoft doesn’t have much to lose here.

“The conventional wisdom is that comparative ads are best used by a smaller player within a particular industry, and I think you are seeing Microsoft trying to change attitudes and expectations about what kind of service you can get from — and what kind of data you shouldn’t be giving away to — your e-mail provider,” she adds.

The majority of Google users likely don’t devote considerable time thinking about — or are unaware of — how Google mines the data in their e-mail to sell advertising, Williams says. “If you asked consumers who they trust more with respect to privacy, Google might get more credit than Microsoft. Microsoft might believe that the only way to break through is to do something directly competitive.”

Monthly statistics from digital analytics firm comScore showed that Google controlled 67% of the U.S. search market in January, leaving Microsoft-controlled sites a distant second with 16.5%. Yahoo and Gmail are the top free e-mail providers in the U.S., leaving Microsoft’s Hotmail — which his being transitioned into the new Outlook service — a distant third.

Williams says that this type of negative campaign is nothing new; for example, battery makers Duracell and Energizer have run similar ads for years, as have beer companies. A more recent example is that of soup makers Progresso and Campbell’s. “Progresso started running comparative ads against Campbell’s classic red label soups and was very successful suggesting that Campbell’s soups were childish and that adults should prefer the heartier soups made by Progresso,” Williams notes.

Like Google, Campbell’s didn’t respond — “which is conventional wisdom. If you are the market leader, you shouldn’t dignify the claims of the upstart,” Williams adds. But a few years ago, Campbell’s launched a smaller line called Select Harvest and ran ads noting that its soups contained no MSG, while Progresso’s did. Progresso fought back, and eventually the antagonism between the two companies escalated to the point where both took claims against the other to the Better Business Bureau.

The campaigns ended up having an unintended consequence that serves as a note of caution should the Microsoft-Google battle escalate further. Williams and Wharton marketing professor Raghuram Iyengar ran experiments showing that “the more of these back-and-forth soup ads our study participants saw, the more negatively they thought about soup overall,” she says. “In this case, the claims weren’t just about how bad a particular competitor was, but they really impugned soup as a category. This is a real risk in some of these comparative cases.”

"How ‘Scroogled’ Could Hurt Both Microsoft and Google." Knowledge@Wharton. The Wharton School, University of Pennsylvania, 08 March, 2013. Web. 16 January, 2022 <https://knowledge.wharton.upenn.edu/article/how-scroogled-could-hurt-both-microsoft-and-google/>

How ‘Scroogled’ Could Hurt Both Microsoft and Google. Knowledge@Wharton (2013, March 08). Retrieved from https://knowledge.wharton.upenn.edu/article/how-scroogled-could-hurt-both-microsoft-and-google/

"How ‘Scroogled’ Could Hurt Both Microsoft and Google" Knowledge@Wharton, March 08, 2013,
accessed January 16, 2022. https://knowledge.wharton.upenn.edu/article/how-scroogled-could-hurt-both-microsoft-and-google/