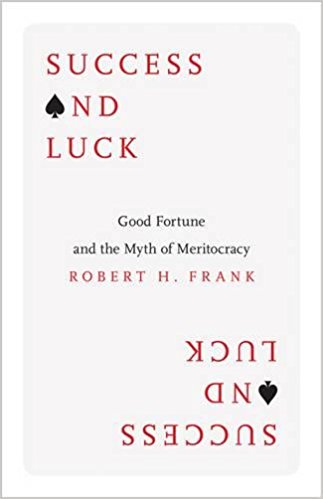 Why do the rich underestimate the role of luck in their success? Why does that mindset hurt society? What can be done about it? These are some of the questions that Robert H. Frank, author of Success and Luck: Good Fortune and the Myth of Meritocracy, addresses in this opinion piece. Frank is an economist at Cornell University and an economics columnist for The New York Times. His books, which include Success and Luck and The Winner-Take-All Society, have been translated into 24 languages.

As the essayist E.B. White once wrote, “Luck is not something you can mention in the presence of self-made men.” Some people are of course quick to acknowledge the good fortune they’ve enjoyed along their paths to the top.  But White was surely correct that such people are in the minority. More commonly, successful people overestimate their responsibility for whatever successes they achieve.

Even lottery winners are sometimes blind to luck’s role. In his 2012 book, The Success Equation, Michael Mauboussin describes a man inspired by a succession of dreams to believe he’d win the Spanish National Lottery if he could purchase a ticket number whose last two digits were 48. After an extensive search, he located and bought such a ticket, which indeed turned out to be a winner. When an interviewer later asked why he’d sought out that particular number, he said, “I dreamed of the number 7 for seven straight nights. And 7 times 7 is 48.”

The tendency to overestimate the predictability of events extends well beyond lottery winners. The sociologist Paul Lazarsfeld illustrated this tendency, known as “hindsight bias,” with people’s reactions to a study that investigated how different groups of men adjusted to the rigors of military life. As he described the study to his subjects, its principal finding was that men who had grown up in rural areas adjusted far more successfully than their urban counterparts. Many of Lazarsfeld’s subjects reacted exactly as he had expected. Why, they wondered, was a costly study needed to confirm something so obvious?

The twist was that Lazarsfeld’s description of the study was a fabrication. The study had actually discovered that men who had grown up in urban settings adjusted to military life more successfully. If Lazarsfeld had reported the actual finding to his subjects, of course, they would have found it just as easy to construct a compelling narrative to explain its truth.

“An unfortunate consequence of seeing ourselves as entirely self-made … [is that it] makes us much less likely to support the public investments that made our own successes possible….”

In similar fashion, when successful people reflect on their paths to the top, they tend to view their success as having been all but inevitable. In their attempts to construct narratives to explain it, they search their memory banks for details that are consistent with successful outcomes. And because the overwhelming majority of successful people are in fact extremely talented and hardworking, they’ll find many ready examples of the long hours they logged, the many difficult problems they solved, and the many formidable opponents they vanquished.

But as the psychologist Tom Gilovich has shown, they’re much less likely to remember external events that may have helped them along the way — the teacher who once steered them out of trouble, perhaps, or the early promotion received only because a slightly more qualified colleague had to care for an ailing parent. This asymmetry, Gilovich points out, resembles the one with which people react to headwinds and tailwinds.

When you’re running or bicycling into a strong headwind, for example, you’re keenly aware of the handicap you face. And when your course shifts, putting the wind at your back, you feel a momentary sense of relief. But that feeling fades almost immediately, leaving you completely unmindful of the tailwind’s assistance. Gilovich’s collaborations with the psychologist Shai Davidai demonstrate the pervasiveness of analogous asymmetries in memory. People are far more cognizant of the forces that impede their progress than of those that boost them along.

An unfortunate consequence of seeing ourselves as entirely self-made — rather than as talented, hardworking, and lucky—is that this perception makes us much less likely to support the public investments that made our own successes possible in the first place.

Being born in a good environment is an enormously lucky thing and one of the only lucky things we can actually control. Basically, we get to decide how lucky our children will be. But that requires extensive investment in the future, something we’ve been reluctant to undertake of late. Even as a shrinking group among us has been growing steadily luckier, a growing number of the unluckiest have been falling still further behind.

The good news is that we can easily do better. It turns out that when successful people are prompted to reflect on how chance events affected their paths to the top, they become much more inclined to pay forward for the next generation.

It would be a mistake, however, to think that simply telling successful people that they’ve been lucky will elicit this reaction. On the contrary, it seems to have precisely the opposite effect, making them angry and defensive. It’s as if you’ve told them that they don’t really deserve to be on top, that they aren’t who they think they are.

Consider Elizabeth Warren’s 2012 you-didn’t-build-that speech, in which she reminded successful business owners that they had shipped their goods to market on roads the rest of us paid for, they had hired workers educated at taxpayer expense, and they had been safe in their factories because of police and firefighters the community hired. In return, she then reminded them, the social contract asks them to pay forward for the next group that comes along.

It is difficult to spot anything controversial in these words. Yet shortly after she spoke them, the video of her speech went viral, provoking outraged comments by the millions.

“Don’t remind your successful friends that they’ve enjoyed a bit of luck. Instead, ask them to recall examples of lucky breaks….”

No, simply telling rich people that they’ve been lucky won’t make them more willing to invest in the next generation. Mysteriously, however, an ostensibly equivalent rhetorical move seems to have precisely that effect: If you ask your successful friends whether they can think of any lucky breaks they might have enjoyed, you’ll almost invariably discover that they seem to enjoy trying to recall examples. You’ll see, too, that their eyes light up as they describe each one they remember.

Research has demonstrated that priming people to experience the emotion of gratitude significantly increases their willingness to incur costs to promote the common good. And people who recall instances in which they’ve been lucky reliably experience gratitude, even when there is no specific person to whom they feel grateful.

The economist Yuezhou Huo, for example, asked one group of people to list three external causes for something good that had recently happened to them, a second group to list three personal traits or actions that had contributed to the good thing, and a third group merely to report a good thing that had recently happened. Subjects received a bonus payment for their participation in this study, and  Huo offered them a chance to donate some or all of that payment to a charity when the study ended. Those who had been asked to list external causes — many of whom mentioned luck explicitly — donated 25% more than those who were asked to name personal traits or behaviors. The control group’s donations fell squarely in the middle.

As psychologists have long understood, logically equivalent statements often elicit very different emotional responses. Calling a glass half empty, for example, conveys something quite different from calling it half full. So, too, with our statements about luck. Don’t remind your successful friends that they’ve enjoyed a bit of luck. Instead, ask them to recall examples of lucky breaks they might have enjoyed along the way. Even if their recollections don’t prompt them to adopt a more generous posture toward future generations, you’re bound to hear some interesting stories.