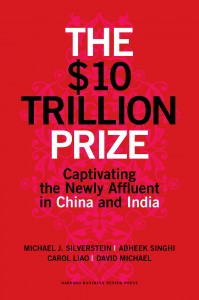 The consumer markets of India and China are widely viewed as a potential goldmine for companies and investors. These two markets are expected to triple over the current decade and by the end of 2020, are likely to be around US$10 trillion in size. Take away a few billions, or even a couple of trillions, and it would still be a huge opportunity for firms around the world. A newly-released book, The $10 Trillion Prize: Captivating the Newly Affluent in China and India, written by a quartet from Boston Consulting Group (BCG) aims to provide a window into the forces driving this new generation of consumers and discusses how companies can use this knowledge to their advantage to win not only in these two countries, but also in the rest of the world.

At a recent panel discussion on the book at the Indian Institute of Management, Bangalore (IIMB), co-author Michael J. Silverstein, who is one of the founders of BCG’s global consumer practice, and Abheek Singhi, leader of BCG’s India consumer practice, reiterated that this is an unprecedented opportunity in world history. The growth that China and India will see in the next 10 years is something that has never happened earlier in human history. “The secret [of success for companies] is to be able to identify the supply chains that allow for [the dissemination of] products at price points affordable for every segment,” said Silverstein.

Panelist Vinita Bali, managing director of Britannia Industries, noted that the huge absolute numbers in these markets mean that for every product category, and at every price point, there is a large base of consumers that can make doing business in the two nations worthwhile. “Companies who ignore these markets would be doing so at their own peril. And those who want to succeed here must be ready for the long haul. It takes a reasonably long time period to get the return on investment.” Singhi noted. “A half-hearted commitment is a recipe for disaster.”

While Singhi pointed to asset bubbles, political and social disharmony, bureaucracy and corruption, and environmental degradation and pollution as possible risk factors, panelist J. Ramachandran, professor of corporate strategy and policy at IIMB, suggested that “the central argument is the importance of education — How [India] as a nation [has] failed on the education front.” Pointing out that both the schooling and the higher education system in India are “broken and in a shambles,” Ramachandran said that the problems are a result of “policy issues.” Silverstein said that India is severely disadvantaged as compared to China in terms of its education system. “In India, education is under-funded, under-regulated and you tolerate 70% of primary schools being substandard. This is a matter of serious concern for India,” he noted. ”I believe that India is up to it. But it will require a change in behavior and a change in political capital.”

Another area where India is seen to be lagging behind China is in terms of excellence. “Excellence is a mindset and we don’t have enough of it,” Bali stated. “We tolerate a lot of nonsense and it permeates into a lot of what we think is acceptable.” Ramachandran added: “The clue to our future is how well we [strengthen] our education system. We must be unwilling to except less. That will drive the desire for excellence.”