Companies spend billions of dollars on advertising each year to control the image and marketing message of their brands. Geico tells consumers that “15 minutes can save you 15% or more on car insurance.” The Energizer battery just “keeps going and going and going.” Nike tells both athletes and couch potatoes to “just do it.”

But in the digital age, consumers are in the driver’s seat as reviews, tweets and posts of actual product experiences travel faster than a TV commercial to reach global audiences in seconds. Scores of unhappy customers can tarnish a company’s reputation overnight. As Benjamin Franklin once observed, “It takes many good deeds to build a reputation and only one bad one to lose it.” No wonder companies live in dread of less-than-stellar feedback.

The concern becomes even more acute as businesses increasingly incorporate reviews from a user’s circle of friends and family — which carry more weight than those from complete strangers — by integrating with social networks like Facebook. According to a 2012 Nielsen survey, 92% of people around the world trust word-of-mouth or recommendations from family and friends above all other forms of advertising. The second most trusted, at 70%, are online reviews.

In the digital age, consumers are in the driver’s seat as reviews, tweets and posts of actual product experiences reach global audiences in seconds.

A new Wharton research paper — titled, “Social Learning for Experiential Product Purchases: The Impact of Homophily and Balance” — sheds light on the impact of social reviews on business by taking into account two features of the relationship between consumers and their social groups — homophily and balance. Homophily is best characterized by the idiom that “birds of a feather flock together” – similar people tend to associate with each other. A simple example illustrates the concept of balance. Consider John and his two friends, Ed and Bob. If each pair has similar tastes for restaurants then this social triad is balanced. In contrast, if John has similar tastes to both Ed and Bob, who themselves are dissimilar, this social triad is imbalanced.

Specifically, Wharton doctoral candidate Jae Young Lee and Wharton marketing professor Raghuram Iyengar look at how homophily and balance influence consumers to collect product evaluations from their social contacts and make a more informed purchase decision. The two researchers suggest that their findings have practical implications for how companies should manage their social review system.

“People often seek product reviews from their circle of friends [because] it helps them understand how good the product is for them,” Iyengar notes. Many Internet companies such as Netflix, Lee adds, provide friends’ reviews to help consumers become more confident about buying a product or service. “The hope is that any reduction in uncertainty about the product will translate to an increase in sales,” he says.

Lee and Iyengar contend that under the right circumstances, a company that showcases reviews from a consumer’s social groups that may include dissimilar product preferences (i.e., an imbalanced relationship) will actually yield the highest profitability. Providing no reviews at all — a temptation for every company — actually causes a decline in sales, they say.

In their paper, the two researchers delve into the subtleties of social learning: How do people learn from others who have similar or different preferences to themselves? The question has real-world implications because people routinely ask the opinions of their family and friends. But what effect does this information gathering have on a consumer’s decision to make a purchase, which is what companies care about?

Suppose John loves to try new restaurants. He usually consults his friends and family for their opinions and checks online reviews before trying out a new eatery. John is on Facebook, and he finds it easier to ask for people’s comments by posting his question online. Indeed, companies are automating these personal conversations by linking their websites to a user and his contacts on a social network. Additionally, many companies — such as Seesaw and Thumb — are offering people the ability to poll their circle of friends before making any purchase.

Under the right circumstances, a company that showcases reviews from a consumer’s social groups that may include dissimilar product preferences will actually yield the highest profitability.

Lee’s and Iyengar’s paper attempts to answer the following questions: What is the impact of social reviews if consumers like John consult friends and family who have similar tastes as his? What about if they have different tastes than he does? Lastly, what about the differences in tastes between his friends and his family? What factors will influence John the most and lead to a decision to try the new restaurant? Figuring out this puzzle will enable companies to maximize sales, the researchers suggest.

To answer the above questions, Lee and Iyengar conducted an experiment within the music category in which they asked 194 college students to listen to 10 songs and rate them on a scale of 0 to 10. These songs had similar average iTunes ratings. There were two lists of 10 songs each, and the participants were randomly assigned to each list. This was the test’s first phase.

Next, in the second phase, participants were given a list of 18 anonymous songs in which no artist or genre was specified. But they knew each song’s average rating on iTunes. They also were told that in a previous experiment, a group comprised of undergraduates and another group of MBA students had listened to and rated songs from both phases.

Participants were then informed as to how closely their preferences resembled those of the undergraduates as well as the MBA students based on the ratings in the first phase. Participants also found out how similar the previous groups’ preferences were to each other. Then they faced two tasks for each song in the second phase: deciding how many ratings to view from the prior two groups who had listened to the song, and figuring out if they wanted to accept the song or get $1 in cash. All songs in the second phase cost $1.25 each on iTunes.

In the experiment, participants chose to accept the songs 25% of the time. On average, they consulted the ratings of 10 people in the earlier two groups to help them make their decisions, Iyengar says. To simulate real-world conditions in which people have to wait for responses from their friends after polling them, participants had to wait half a second before receiving a rating from the prior groups, Lee adds.

The authors found that people like to gather information from others who have similar tastes because they learn more from these interactions. They also discovered that the differences in preferences between a consumer’s social groups have an impact on the final decision to purchase — something most Internet companies today do not take into account.

In short, people want to read reviews from people with similar tastes to theirs, but they are also interested in seeing reviews from people in their social networks who don’t have the same tastes that they do, says Iyengar. “Typically, retailers have been thinking about one-to-one relationships,” he adds. “What we are trying to say is they should also think about how relationships among different friends might impact the information seeker.”

According to Lee and Iyengar, many companies can determine the similarity of preferences among a user and his or her contacts by scouring product reviews. For instance, if the user and a friend both gave the latest Star Trek movie four stars on a movie review site and shared other similar ratings, they would be considered as having similar preferences. If not, then the two friends would be considered as having dissimilar tastes.

How would the result of the experiment benefit companies in designing their social review systems? To illustrate how social reviews may boost profits, the authors consider a simple scenario in which a user is looking to collect product ratings from two groups of friends. Suppose both groups have similar preferences to that of the information seeker — one with a higher correlation of 0.7 and another with a lower correlation of 0.5. Additionally, suppose the two groups have independent preferences.

Based on the results of the experiment and with some assumptions about product price and the cost to a firm for providing reviews, the authors concluded that the optimal profit will result from providing a maximum of eight reviews on the site. (They noted that Netflix provides nine friends’ reviews as its default setting.) But five of these eight reviews, or 63%, should come from people with more similar preferences as the consumer (the group with 0.7 correlation). The remaining three reviews should come from people who have less similar tastes (the group with 0.5 correlation).

Now, suppose a company remains unconvinced and decides to publish eight reviews all from the group that is more similar to the user. The assumption is that the user would likely agree with most or all of the feedback. In the authors’ experiment, the optimal profit would be decreased by 24%. “People like diversity [because] there are diminishing returns in the value of information from just a single source,” Iyengar says.

In another scenario, suppose an Internet retailer decides to publish reviews from groups who may not be independent. As before, the user has a 0.7 correlation in preferences to one group in his circle and 0.5 with a second group, also in his social sphere. But suppose two groups have similarities between them as well, at a 0.4 correlation, instead of zero. In this case, the profit declines by 6% from the optimal level when the two groups are independent. The retailer would have been better off if it chose two groups that are the opposite of each other with a 0.4 correlation. The maximum profit would be increased by almost 15% as compared to when the two groups are independent.

Lee says consumers often gather feedback from people they know and with whom they share common experiences. The challenge for businesses is to also account for the preferences among consumers’ social groups because it has an effect on the final decision to purchase. “Our findings,” he adds, “are relevant for many Internet retailers who offer social reviews to increase product sales.”

“Social Learning for Experiential Product Purchases: The Impact of Homophily and Balance” 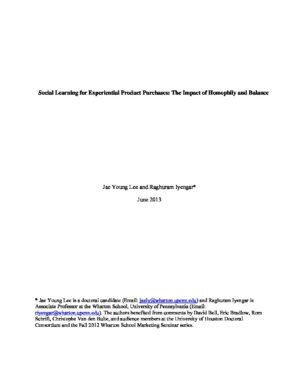