Brexit presents the European Union with profound challenges. But by returning more benefits to ordinary citizens, promoting the many advantages of a common market with a GDP of $13.4 trillion, and luring more financial services firms away from the U.K. — along with some additional steps — the 27-country bloc could create a new age of growth, according to this opinion piece by Kalin Anev Janse (@kaanev), the secretary general and also a member of the management board of the European Stability Mechanism (@esm_press), or ESM, the eurozone’s lender of last resort.

Can Europe benefit from Brexit? Absolutely yes. In today’s world, choosing to be part of something big is most definitely more advantageous than opting for smallness and isolation. Europe is the most successful economic, trade, and financial collaboration among 28 countries in history. Over recent decades, the cooperation among these countries has not only ensured peace in a continent torn for centuries by wars, but it has also proved to be the most thriving wealth creation project the world has ever seen. Though I am very sad that the British people have decided to leave, it will create one heck of an opportunity for the rest of Europe.

In today’s interconnected global economy, size matters. The European Union is the second-largest economic bloc in the world, with a gross domestic product (GDP) of $16.2 trillion in 2015 compared to the United States (U.S.) at $17.9 trillion and China’s $10.9 trillion (figure 1.) Without the United Kingdom (U.K., 2015 GDP of $2.8 trillion), the EU and its 27 remaining countries will still be the second largest with a GDP of $13.4 trillion. What is more, a handful of countries are interested in joining the union (candidate members range from Montenegro to Turkey.) 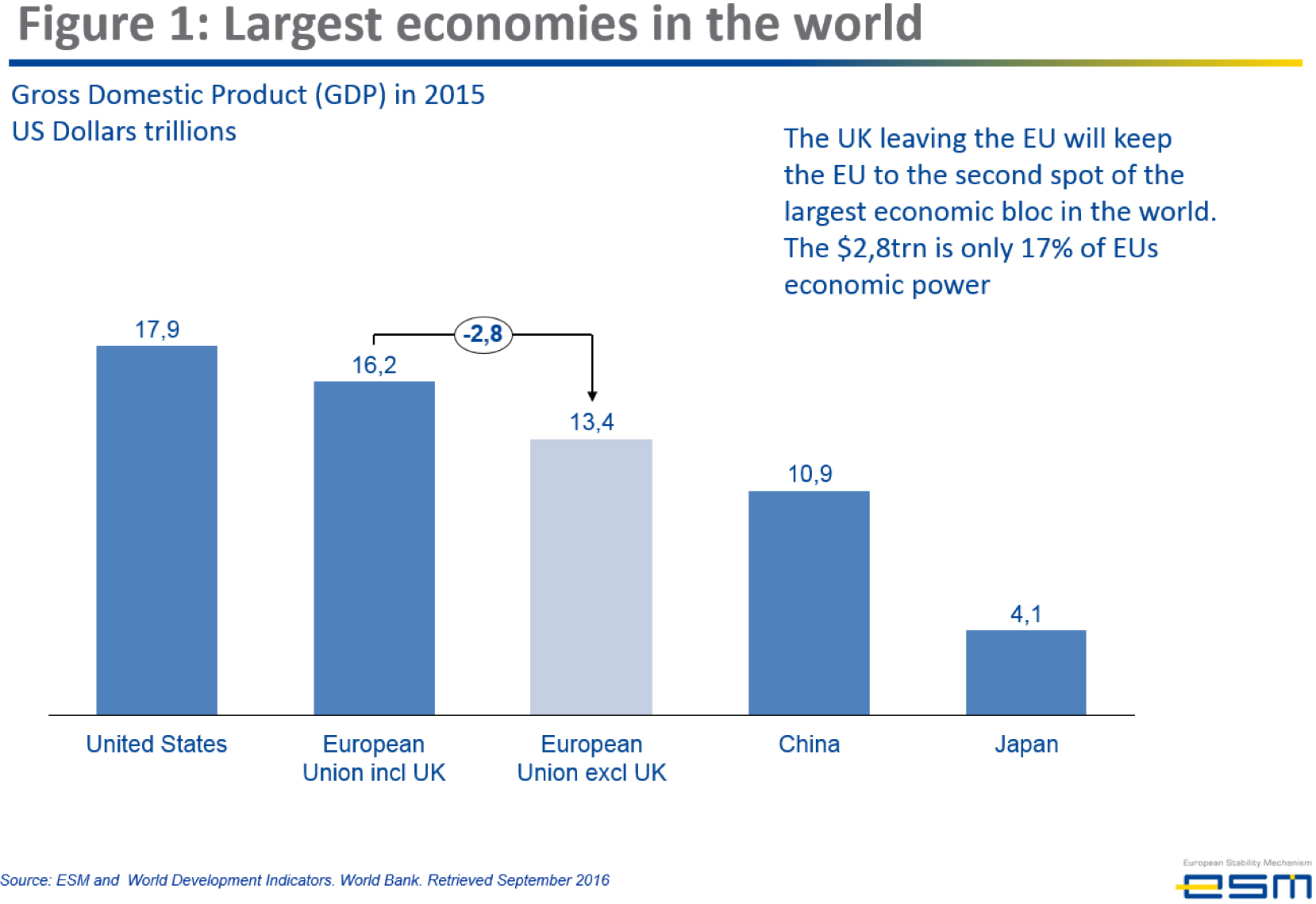 Disconnecting from a large economic powerhouse hurts, and it can hurt a lot. The wave of globalization since the 1970s has intertwined many economies. The most thriving are those that have opened themselves up (like South Korea and Singapore.) The European Union has been the most far-reaching project in economic integration ever — bringing together 28 countries.

Its crown jewel is the European single market: ensuring free movement of goods, capital, services, and people. These four freedoms have allowed for unprecedented standardization, ranging from food (e.g. British jam can be sold across Europe without the need to comply with 27 different regulations) to labor (e.g. Dutch farmers employ south-eastern Europeans to harvest crops, jobs the Dutch typically don’t want to do). Giving up these freedoms will be harmful, much more for the U.K. than for any other part of the world (figure 2). Countries that have disengaged from the world in recent decades have all suffered. 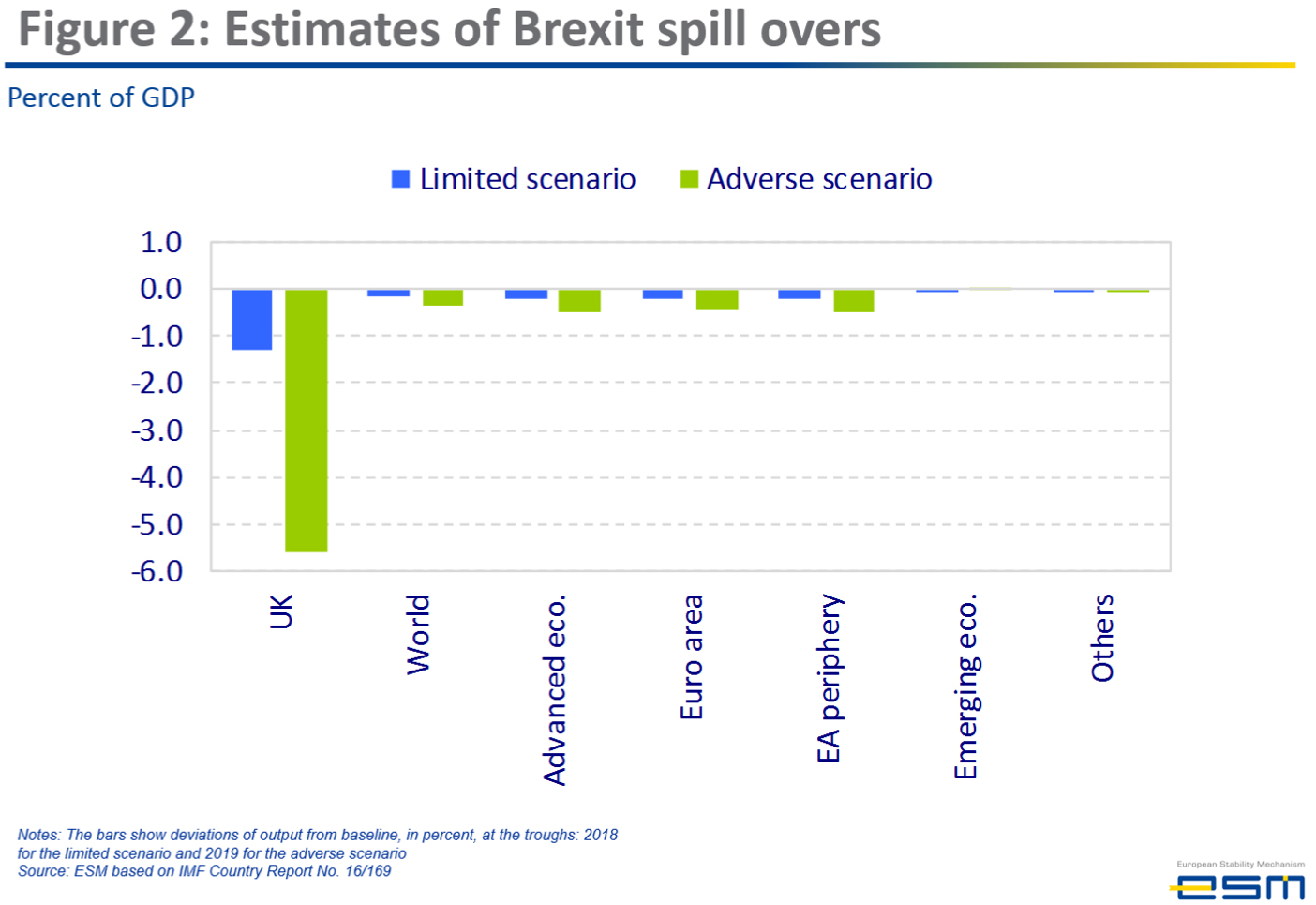 Then There Is Regulation

In March 2015, the U.K. won a landmark Court of Justice of the European Union case against the European Central Bank regarding the clearing of euro-denominated securities and derivatives. It is a huge business, with the value of daily transaction turnover exceeding $1 trillion. Though the U.K. does not use the euro as a currency, the court upheld its privileges to clear the euro because it is part of the EU. Leaving the EU could therefore not only mean losing the business itself, but the ecosystem around the business, which often follows. A U.K. exit might also limit the ability of London-based clearing banks to execute derivatives transactions with EU clients if the country fails to maintain the EU passport for financial services.

And there is more. Especially since the crisis, financial services have become one of the most regulated industries. The EU adopted considerable common regulation to ensure safe, supervised, and pan-European banking services. The City of London has been benefitting from this. Though a lot of the deals, for example, M&A, ECM (equity capital markets) and DCM (debt capital markets) are ‘sourced’ out of London, the real economy transactions take place in Europe’s strong economies like Germany and the Netherlands. Losing EU passport rights, deviating from EU regulation, disengaging from the Capital Markets Union will shift market players to the bigger piece of the pie (the remaining 27 EU countries) and away from the smaller slice (the U.K.). Finally, the EU will stay an important market for the U.K. economy. To be able to export to EU countries the U.K. will have to fulfil EU regulation, but after Brexit they will lose the ability to influence EU regulation (e.g. emission rules for cars, regulation on food and energy efficiency rules on equipment)

People drive economies. After China and India, the EU has the third-largest population in the world. EU citizens are highly educated, diverse, speak many languages, and have a broad range of skill sets. They are also free to work, live and retire in any EU country. This offers a unique half-a-billion strong talent pool. The U.K. has benefited considerably. Many large corporates and banks established their headquarters in London because of this substantial talent pool (currently 3.6 million non-British EU citizens live in the UK.)

The single market of 444 million EU citizens will remain strong, while the UK’s talent pool will shrink to 65 million (figure 3). UK-based financial institutions and other international corporations will very soon feel the burdens of this: the uncertainty around the employment rights of current EU citizens in the U.K.; the future difficulty in recruiting EU citizens for U.K. operations; and the potential expansion of a points-based immigration system to cover EU nationals.

Boost the single market – but shift the focus to direct benefits for people…. Focus on common regulation … that benefit EU citizens directly, such as abolishing [telecom] roaming costs.

Examples of this are not hard to find. When I graduated from business school, I applied to investment banks in New York. It was like a childhood dream. With an EU citizenship, they all diverted me to their London or Frankfurt branches. Why? Because U.S. visa requirements, even for highly skilled workers, pose a significant recruitment burden. In the same spirit, for international banks based in the U.K., it will be much easier to recruit in Frankfurt or Paris than to go through a lengthy, uncertain, and potentially expensive recruitment process. 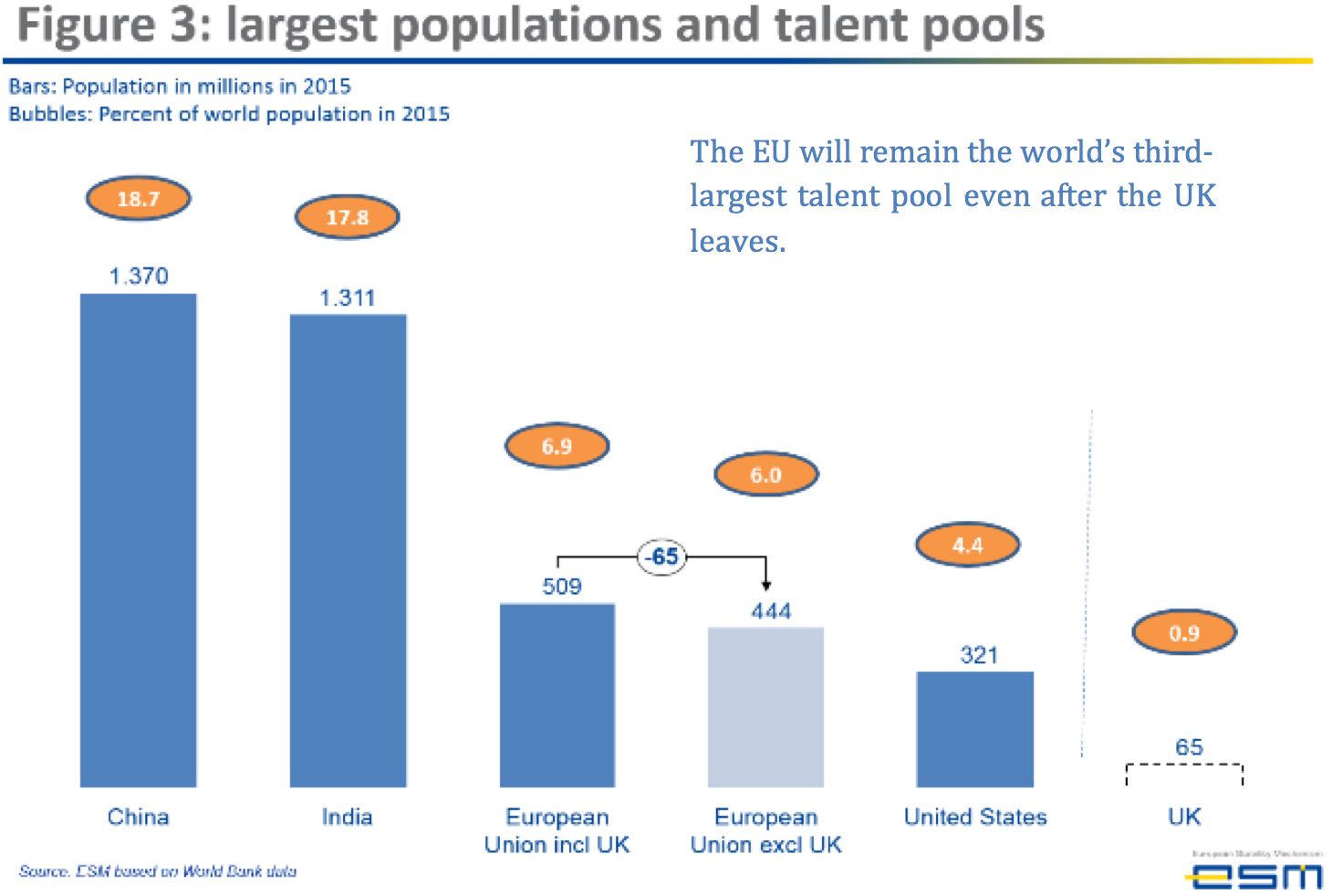 And the devil will be in the details. EU employees might vote with their feet if their personal situation worsens. In any case, they will face new uncertainties. Post-exit, will the U.K. continue to allow, as the EU does, that its citizens move pension rights across countries? Will young Europeans who move to London continue to be able to bring over their partners, as they could under EU family reunification rules? The hostile environment towards Eastern Europeans doesn’t help either.

In the end, the final question many may ask themselves is, “Why bother?” Choosing certainty may become the best solution. Many multinationals and other financial institutions could easily decide to move headquarters to continental Europe, retain access to the 444 million people in the talent pool, and keep the benefits a free and open labor market offers. This explains why a large number of London-based corporations are touring Frankfurt, Paris, Amsterdam, Dublin and even Luxembourg in search of better alternatives, thus proving that Brexit forms an immense opportunity for the rest of Europe.

Uncertainty is never good for long-term capital investments. Large corporations (like Japanese car manufacturer Toyota) are re-examining investments in the U.K. Why build a new factory wing, if the export tariffs to the EU are uncertain? If World Trade Organisation rules were to apply, an extra entry tariff of 10% would be added onto car prices making them a tenth more expensive to export from the U.K to EU countries. Better to assemble them in continental Europe instead and retain the benefits of the highly lucrative EU single market. Such a shift is not difficult, since the rest of the EU offers a number of good alternatives. The Chinese are leading the way. They opened a ‘Great Wall’ car assembly line in Bulgaria a few years ago.

Some diversion of investments is already taking place. Amid a surge in redemption requests after the vote, U.K. property funds halted exchange trading and some suspended the redemptions. The U.S.-based fund Marathon, with $13 billion in assets, shifted investments to Frankfurt, Paris and other EU cities anticipating that many U.K banking services jobs will be moving abroad.

And again, the devil is in the details. Not only will the U.K. lose access to a number of EU investment-stimulating programs, such as: the European Investment Bank (EIB, $33 billion in U.K. project finance investment 2011–2015); the Juncker investment plan; structural funds; and agricultural support for poorer areas. The U.K. will lose its biggest investor in venture capital (and potential start-ups): the European Investment Fund. The fund committed $2.5 billion to 144 U.K. venture firms between 2011 and 2015. This amounts to a whopping 37% of all venture funding raised in the U.K. over that period. The Luxembourg-based EIB will not disappear, but it will redirect its investments to venture capital and start-ups in the rest of Europe. Some beneficiaries will simply follow the money.

Make it very attractive for banks and corporates to relocate from the U.K. to EU-27. They will benefit from the single market, a huge talent pool and aligned legislation.

Whether, when and how Britain will trigger the EU leaving clause, Article 50, as well as the content of the final trade agreement with the EU, only add to uncertainty and create further risk. Indeed, the various reflections in Scotland,  Northern Irelands and Gibraltar on whether to leave the EU together with the U.K., or instead leave the U.K. and stay within the EU, as well as the prevailing hostility towards foreigners, will further discourage investors.

Opportunities for the Rest of Europe

Obviously many questions remain to be answered regarding Brexit and the effects on the U.K., but it nevertheless offers an opportunity for the remaining 27 countries of the EU, with a huge potential up for grabs.

Everything above creates one heck of an opportunity for Europe. And it is up for grabs. All it takes is for four or five of the largest banks to decide on one of Europe’s cities and move their investment bank and trading desk. The rest of the ecosystem: the consultants, lawyers and other service providers will follow rapidly, and so will corporations. The question is: Who is brave, bold and ambitious enough to start?