Has a decline in loyalty to one’s company, common today among lower-level employees, now spread to the upper ranks as well?

When Wharton management professor Peter Cappelli and Monika Hamori of IE Business School analyzed job search data from a leading executive search firm, they found that more than half of the high-level executives contacted by the firm — 52% — agreed to be candidates for positions outside their company.

The number of executives who responded to the search firm’s initial call was “higher than I expected,” says Cappelli, director of Wharton’s Center for Human Resources. “I thought that most executives would be more committed to their organizations, that they wouldn’t be interested in moving. People have family ties and work projects they have invested time and energy in, and yet more than half of those contacted basically said, ‘Yes, I’m interested.'”

The two researchers’ data focused on executives in the financial services sector, including CEOs, chairpersons and executive vice presidents as well as directors, partners and principals, among others. The executives did not initiate the search process, and they had to agree to be a candidate before they learned much, if anything, about the job in question.

Although one frequently hears executives complain about lack of loyalty among employees further down the organization, “these executives are among the least loyal people in the company,” Cappelli notes, adding that the more senior the executive, the more willing he or she is to engage in a job search. The lack of allegiance to one’s company “is symptomatic of a broader way of managing organizations in general,” Cappelli says. Most of the companies included in the researchers’ database “routinely dump people and go outside to look for new ones. So in that sense, maybe it’s not so surprising that 52% of the people are willing to think about leaving. That’s the way the companies treat them — as disposable.”

Moreover, employees these days expect to work for several different companies during their careers — a significant change from earlier decades when they could look forward to lifetime employment and in-house career guidance. Individuals now are managing their own careers — seeking out job training to diversify their skills, setting up their own networks and finding their own mentors. As Cappelli notes, “a lot of the perceptions of career advancement are based on the notion of changing companies.”

The two researchers found that executives with “career breadth” — including international experience — are more likely to engage in a job search, suggesting that when executives are moved around from city to city or country to country, “they don’t develop strong ties to the organization. It becomes easier for them to leave,” says Cappelli.

“Maybe it’s not so surprising that 52% of the people are willing to think about leaving. That’s the way the companies treat them — as disposable.”

It’s not just geographic mobility that influenced executives’ responses. As the paper states: “Those with broader experiences who have [rotated] across functions and business sectors, even within the same company, are also more likely to [answer a call from a headhunter] because they have more to learn from search about the broader set of opportunities that might be presented to them.”

The research paper, titled “Who Says Yes When the Headhunter Calls? Understanding Executive Job Search,” will appear in Organization Science next month.

Among the two researchers’ other findings: Executives who work for firms that offer above-par financial performance — and higher levels of compensation relative to peers — are less likely to search for a new position elsewhere; the longer an executive has spent with his or her current employer, the less likely he will engage in a job search; and the more time has elapsed since an executive has changed employers, the less likely he or she will be interested in looking for a position outside the company.

On the other hand, shocks “that affect the prospects for one’s future career” increase the likelihood of job searching, the researchers write. Examples include completion of a merger or acquisition in the last two years, a change in CEO or a major restructuring — i.e., “another way of saying that jobs will be lost and positions changed, and we don’t really know what the future is going to look like,” says Cappelli. Think about the world of politics, he suggests: “Your candidate is behind in the polls; you have a position in his or her administration at election time. Will you talk to the search guys? Yes, probably.”

For executives who are approached by a headhunter, the decision to become a candidate for the as-yet-unspecified position involves some costs, “including the time and energy to prepare for an interview,” find appropriate references and cope with the “anticipated psychological costs of rejection should the search not be successful,” the researchers write. There is also the danger that one’s current employer finds out that the executive is interviewing for another job.

At universities, faculty “court offers from the outside and then pretend they want to accept one because it is a way of leveraging a higher salary in their current job,” says Cappelli. “In the corporate world, you don’t get rewarded for this, but in fact can be punished. The risk is that your reputation will be damaged, which affects advancement in the current organization and the willingness to recommend you for other positions. So there is some risk in agreeing to be a candidate for a job search.”  But it’s also true that search consultants are good at keeping confidences, Cappelli notes. “The risk is not huge that your employer will find out, although of course the further down the road you go, the bigger the risk becomes.”

Cappelli and Hamori cite research showing not only that companies spent about $10.4 billion in search fees in 2011, but also that, based on responses from close to 2,500 executives in another study, “the number one trigger for job searches by executives is receiving a call from an executive recruiter.”

The database used by Cappelli and Hamori was limited to financial service companies in the New   York area, including asset management firms, banks, consumer finance companies and investment banks. The researchers drew a random sample of 2,000 executives from a larger sample of 14,000 executives, or about 2% of the 740,000 people employed in “financial activities” in the New York-northern NewJersey-LongIsland metropolitan areas.

Although the researchers were not given the names of the executives in their sample, they did get information on the executives’ current job and most recent previous job (including, for example, his or her title, function and industry segment) as well as his educational background and international experience. Information on the individual’s employer was available from other databases.

“Your candidate is behind in the polls; you have a position in his or her administration at election time. Will you talk to the search guys? Yes, probably.”

Forty-five percent of the respondents were employed in investment banks and securities; 23% in asset and money management firms, 20% in banks and 12% in finance companies.

Ramping Up the Job Search

While the two researchers used data from 2002, Cappelli suggests that the economy today is not much different from the economy 11 years ago. The country was then, and is now, recovering from a serious downturn. In addition, the financial crisis makes it more difficult for people to move because of uncertainties surrounding both the overall economy and individual companies. “You heard from a lot of people in this downturn that it was difficult to change jobs because they weren’t sure what they were getting into,” Cappelli says, adding that he considers this a temporary phenomenon. “If you look at data on job satisfaction and commitment, the vast majority of people across all occupations and industries indicate they plan to look for a new job as soon as the economy improves.”

As for executive education programs, they may have the effect of increasing willingness to search for positions elsewhere, the researchers found. Again, it’s a reflection of changes that have taken place in corporations over the past 20 years. “There is a perception, especially with respect to executive MBA programs, that people who sign up are going to leave their company once the program is completed,” Cappelli says. “But I think the reality is that people who go into those programs are investing a lot of their own time and energy; they are self-identifying that they want to do more in their companies – get promoted, work on different types of projects, etc. – all ambitions that one would expect companies to encourage.”

But many companies’ in-house talent development functions no longer exist due primarily to cutbacks, Cappelli states. “The person who makes the decision as to whether you can participate in an executive education program is now your local manager – his budget and his decision. Yet he has no interest in your long-term development in the company because that development is likely to take you out of his division. So you complete an executive education course and are ready to do something bigger, but it’s not going to happen. It’s a mistake on the part of the management – it’s classic sub-optimization – making sense for the local manager but not for the company as a whole. In that context, you can see why people who have spent considerable effort advancing their skills and knowledge want to job search outside the company.”

Given today’s unsettled economy, what can companies do to keep executives from job searching? The answer seems obvious, Cappelli says: Develop your own talent internally and give your employees opportunities for advancement inside rather than outside the organization. But he isn’t exactly optimistic these things will happen. “If anything, companies these days are more inclined to hire from outside, cut faster during restructuring, and be brutal when it comes to layoffs. All of these things decrease employee loyalty.” 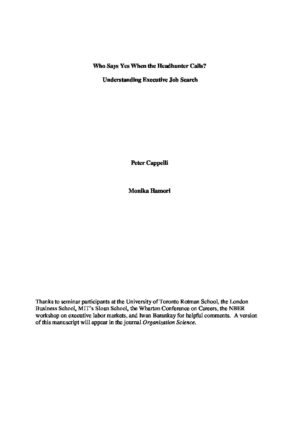