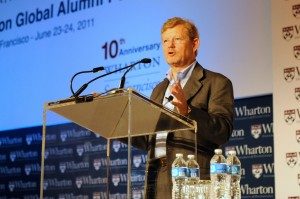 A more “federalistic” system — in the vein of the structure of the United States government — would allow the European Union to streamline processes and achieve the “most significant” economic development, according to Swedish banker and industrialist Jacob Wallenberg.

In a keynote address at today’s Wharton Global Alumni Forum in San Francisco, Wallenberg, who is chairman of Investor AB in Stockholm, acknowledged that making such a move is easier said than done. “The cultural differences between the countries in Europe are such that I do not foresee a chance to move in that federalistic direction in the near future.”

What does need to happen is closer collaboration between the eurozone member countries, Wallenberg said. The concept of the EU is sound as long as all of the countries “play by the rules. The problem is that four countries did not play by the rules,” he noted, referring to the financial troubles plaguing Greece, Spain, Portugal and Ireland. “If it’s a large number of countries, that’s when you have a problem.”

Calling Greece “the weakest link in the EU today,” he added that the EU member countries and the International Monetary Fund “cannot afford a Greek meltdown” — the potential impact of which he compared to the collapse of Lehman Brothers “times two.” The worst-case result of the eurozone’s current problems would be the partial disintegration of the EU, with some countries abandoning the euro, Wallenberg said. But he believes that the eurozone “is an integral part of the global economy, and a lot more important to the world’s development than what it has been given credit for.”

Meanwhile, the global economy is experiencing a “great rebalancing,” and both Europe and the United States must pick up the pace of economic development and innovation in order to compete with emerging markets in Asia and Africa. “If the West does not act now to get more competitive, we will not be bypassed by the Chinese — I would argue that we will be run over by the Chinese,” Wallenberg said.

He also urged the lessening of a rising tide of protectionist trade policies, noting that the West needs to set an example for the rest of the world. “We can’t abandon free trade principles when they are inconvenient. We can’t introduce trade barriers and then turn around and complain about the lack of access to Brazil or India or China.”