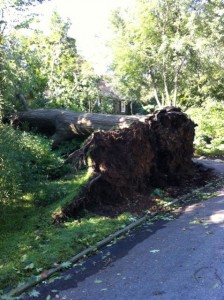 Although it’s way too early to total up the damage caused by Hurricane Irene, early reports suggest that insurers “got off with much less in the way of insured losses than they had anticipated,” says Wharton professor Howard Kunreuther, co-author, along with Erwann Michel-Kerjan, of At War with the Weather: Managing Large-Scale Risks in a New Era of Catastrophes.

According to one insurance expert cited in a Wall Street Journal article today, Irene will most likely be responsible for $3 billion to $5 billion in insured losses, the tenth most expensive hurricane in U.S. history. By contrast, Hurricane Katrina in 2005 racked up insured losses of approximately $46 billion.

Kunreuther, who is co-director of Wharton’s Risk Management and Decision Processes Center, notes that “not only was the force of the hurricane less than the earlier predictions, but much of the damage was caused by flooding.” That’s an important distinction, he adds, because homeowners and commercial insurance policies cover losses to property caused by the wind. “If the damage is water-related — either due to flooding or storm surge — then the property owner must have flood protection under the National Flood Insurance Program (NFIP). Although private insurers market NFIP policies, the claims are the responsibility of the federal government.”

Based on analyses of data from the NFIP done by Kunreuther, Michel-Kerjan and others at the Wharton Risk Center, it is very likely that many homeowners suffering damage from Hurricane Irene “will not have purchased flood insurance even if they are required to have it,” Kunreuther states. It is also unlikely that “they will have invested in measures to reduce losses from hurricanes. Irene provides an opportunity to get the message across that ‘it can happen to me’ so that [people] will decide to undertake protective measures prior to the next disaster rather than after it occurs.”

Michel-Kerjan, managing director of the Wharton Risk Center, compares the handling of Irene to the way officials dealt with Katrina. “If you look at how this administration has handled disaster preparedness and crisis management compared to what we saw during Katrina, it is much improved.” One lesson learned from Katrina, he adds, is “the importance of everyone working together, including President Obama, the head of FEMA [Federal Emergency Management Agency], the head of the Department of Homeland Security, the governors of different states, local officials, mayors and so forth.”

As for the public’s response to Irene, “My sense is that the request to evacuate was well-handled, which was not necessarily the case during Katrina,” says Michel-Kerjan. Many people chose to stay in New Orleans, “although truth be told, they had been warned before about a possible hurricane,and nothing happened. So when you get warned and [it is a false alarm], you aren’t going to listen.” With Irene, however, most people listened. The Times article noted that evacuation orders for 370,000 people had been issued across New York City alone. “The number of people who fled the city is remarkable,” Michel-Kerjan adds.

As for the vagaries of insurance coverage, Kunreuther points out that controversy has arisen during past hurricanes “over whether the damage was caused by the wind or the water” — issues that will no doubt be raised with respect to Hurricane Irene. “There are occasionally inequities created by this distinction,” Kunreuther says. “Consider the following example reported in Harry Moore’s book, …And the Winds Blew, describing the impact of Hurricane Carla which hit Texas in 1962. One contractor built his home with the best available materials so that it withstood the winds from Carla, but it later was flooded and almost totally destroyed. His damage claim under a homeowner’s insurance policy was disallowed. Nearby, another house built of cheap materials had its shingle roof disintegrated by the wind early in the storm. The insurance claim for the total loss was paid.”