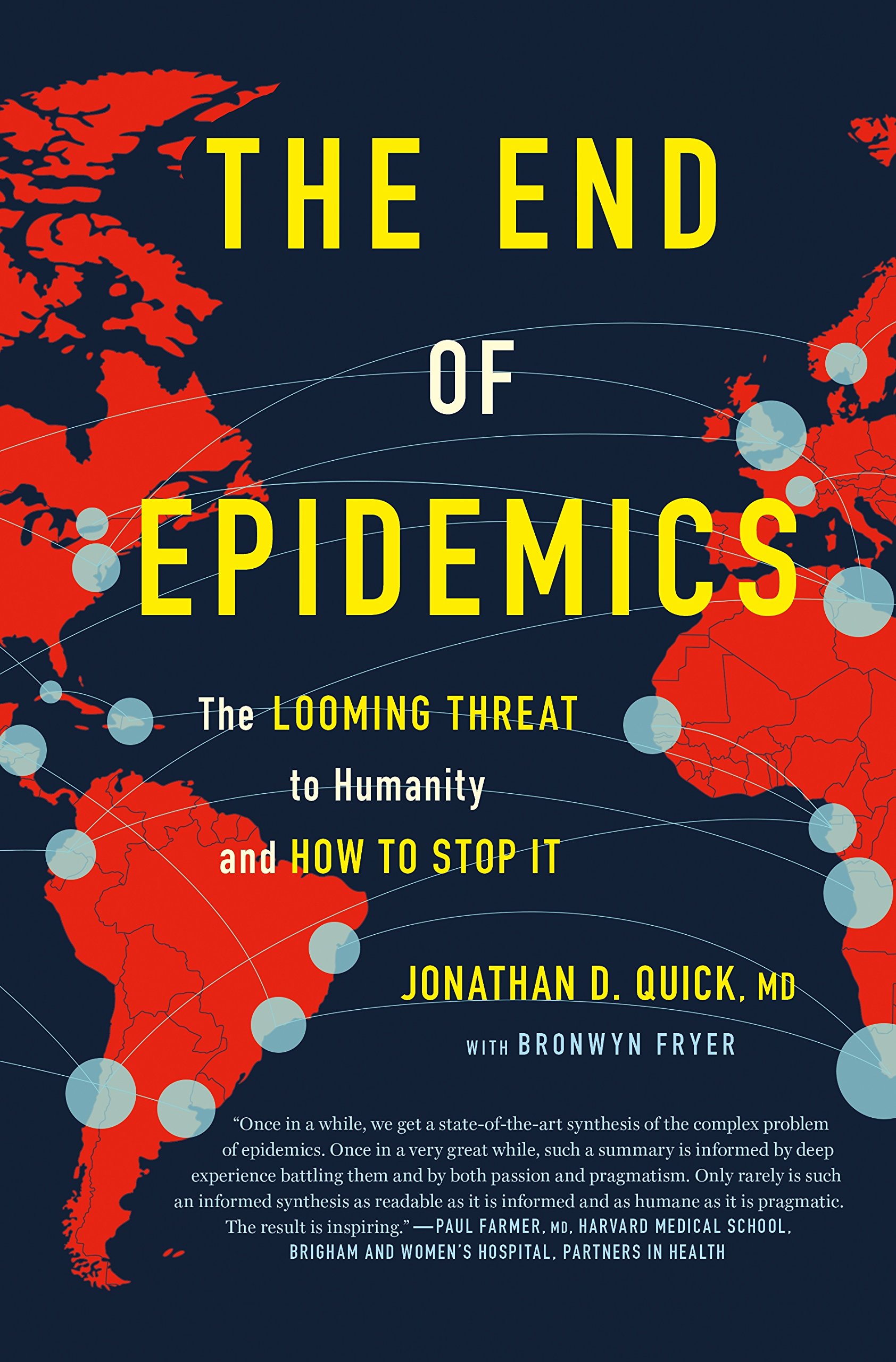 Jonathan Quick is a medical doctor on a mission to make sure people around the globe don’t get complacent about one of the greatest threats to our survival. It’s not nuclear war or terrorism that Quick worries about, but a much smaller, more insidious enemy: viruses. From influenza to Ebola, epidemics are a growing concern in the medical community and beyond. Viral outbreaks that were once confined to small geographic areas now have no boundaries as people travel quickly from place to place. Quick, an instructor at Harvard Medical School and the Boston University School of Public Health, joined the Knowledge at Wharton show, which airs on Wharton Business Radio, SiriusXM channel 111, to explain his seven steps for curbing viral outbreaks outlined in his book, The End of Epidemics: The Looming Threat to Humanity and How to Stop It. (Listen to the full podcast using the player at the top of this page).

The following is an edited transcript of the conversation.

Knowledge at Wharton: What is the level of concern in the medical community about epidemics?

Jonathan Quick: It’s very serious concern. We remain vulnerable to pandemics and epidemics of all sorts. The biggest one, the nightmare one, would be a reprise of the 1918 Spanish flu, which killed 50 million to 100 million people worldwide. That could happen again, but on a grander scale.

Knowledge at Wharton: What has prevented widespread outbreaks in a major city, at least in recent years?

Quick: Partly, it’s simply the biology of the influenza virus. Every 10 to 15 years, you’ll have a major outbreak. What happened 100 years ago was an unusual set of mutations, which created a virus that was highly deadly and highly contagious. Firstly, we’ve been fortunate in terms of the nature of the virus. But the second thing is, we’ve been doing much, much better on vaccination and good public health practices such as hand washing.

Knowledge at Wharton: An important part of this book is this plan you have come up with, which is referred to as the Power of Seven. Take us through some of the steps you would like to see implemented.

“We remain vulnerable to pandemics and epidemics of all sorts.”

Quick: The first is strong leadership. Where we’ve had strong leadership, as in the case of eradicating smallpox or in our response to a virus out of China called SARS in 2003, where there’s been rapid, decisive action, we’ve put that epidemic to rest quickly.

The second thing is strong, resilient public health systems that can respond quickly. The third thing is a real focus on prevention, good vaccines. Number four is good, trustworthy communication that the public will respond to and take the necessary action. Number five is innovation. We need better vaccines, better medicines, better diagnostics, and we need a better early warning system.

Number six is investment. Given the magnitude of the threat, we are seriously under-investing. And finally, what we’ve seen is that it takes a committed public to keep the bell ringing between the outbreaks. Even if we know all the things to do, the momentum lapses when the headlines go away and people are back to school and back to work.

Knowledge at Wharton: Who is responsible for the communication piece?

Quick: These days, it really needs to be all channels. We found in West Africa that there was quite active social media, a very large percentage of which was wrong but was believed more than what the government was saying. We need to build trust in each of the communication mechanisms and align the messages. We look to these centers, like the U.S. Centers for Disease Control, for the core messages. Then we look to social media, the print media, our local institutions and schools, to get out the same message based on the best available evidence.

But what’s critical is, early in life, to understand how to be skeptical and to ferret out the sources you can have confidence in. What are the sources that are not reliable? That is a critical part of education in the 21st century.

Knowledge at Wharton: It seems we’re not even close to the level of investment and funding that we need, which is number six.

“We need a universal flu vaccine, one that attacks all of the strains of influenza.”

Quick: Let me give you an example. We started talking about influenza and the substantial risk it presents. In a virus like the one in 1918, it would kill 200, 400 million people if it returned. We need a universal flu vaccine, one that attacks all of the strains of influenza. We need to be spending $1 billion a year on that, according to experts. The National Institutes of Health is spending less than $40 million a year. Yet the cost of influenza on the U.S. economy is over $80 billion a year, directly and indirectly. So, for a relatively modest amount, we could be protecting ourselves.

We’re spending a fortune on responding to these major epidemics. But we’re spending it all in the wrong place, at the wrong time. We should be spending ahead to prevent. We estimate that every dollar spent on ramping up our prevention returns $2 to $10 in savings.

Knowledge at Wharton: You say that killer viruses are potentially more dangerous than, say, a ground war, or a nuclear bomb. How so?

Quick: Let’s look at it from a business point of view. A pandemic that, within a couple hundred days gets to every population center in the world, is affecting your suppliers, your staff, your customers, transportation and everything else. It’s the only thing that can get everywhere and affect every part of a business. Most other threats that we think about are either one location, like an active shooter, or in one system, like a cyberthreat. If you had a Fourth of July level of nuclear exchange, that would be catastrophic. But that’s still one part of the world.

Knowledge at Wharton: How much prevention is taking place right now?

Quick: I’ve been very heartened by the events since Ebola. That has stimulated the biggest acceleration to improve pandemic and epidemic readiness globally. We’re starting to see that momentum waning. But we have to understand that being safe anywhere means being safe everywhere, and the reality is that two out of three countries worldwide still don’t have the systems to identify and respond.

Knowledge at Wharton: In a place like West Africa, there wasn’t even the infrastructure to handle Ebola at the time.

Quick: Absolutely, at the beginning. It was the worst three countries you could have chosen because they’re among the poorest and have had the most challenging leadership. What was fascinating and the untold story is that once the communities got mobilized in West Africa, once they understood what needed to be done and mobilized the churches, the religious leaders, the market women, the traditional healers — when they mobilized everybody, they really quickly brought it to an end.

Knowledge at Wharton: How does climate change accelerate the potential for some of these diseases to spread?

Quick: One example is what’s happening with mosquitoes. Many of us were really concerned when the Zika virus came out of West Africa, ended up in Brazil and in the southern U.S. It’s not a very dangerous virus to healthy people, but it causes horrific birth defects. That virus slept quietly for 50 years in West Africa. It started moving in the mosquitoes. More than 30 states in the U.S. had the mosquito that carries the Zika virus, and we’re going to see mosquito populations in places where we haven’t seen them before.

“A pandemic is the only thing that can get everywhere and affect every part of a business.”

Elimination it is a multi-part thing. Number one is getting an effective, proven Zika vaccine. That’s really important. The second thing is, the mosquito that carries Zika is quite a different mosquito than the malaria one. It’s an urban mosquito for which we don’t have the best control. The third thing is getting a diagnostic, which is coming now, that would let us do an even more active, real-time surveillance of where it is.

Knowledge at Wharton: People are often surprised when you talk about diseases spreading in major cities as opposed to rural areas. Does the public need to think differently about that?

Quick: Absolutely. One of the factors that accelerated Ebola, and it accelerates influenza and others, is being in major cities. It’s the crowding. I think people should be concerned. Whether they’re in cities or rural areas, it is a major concern. We’ve talked about influenza as the virus that is most likely to get us. In a wonderful, 4.5-minute video, Bill Gates says he figures it’s a 50% chance in his lifetime that we’re going to have a big flu epidemic that is multiples of what we’re seeing right now.

Knowledge at Wharton: With the all the advances in medical technology, it seems surprising that influenza still sickens millions of people every year.

Quick: It’s surprising but understandable from the point of view of the flu virus being the most mercurial and wiliest, in many varieties and a lot of mutations. But it is unacceptable in the sense that we’ve not had a good flu vaccine. It’s actually the most variable in its effectiveness from year to year. We haven’t invested what we need to in getting the so-called universal influenza vaccine. So, the surprise is partly in nature, but the bigger surprise is that we’re just being too complacent about it. We’re not tackling it.

Knowledge at Wharton: Many parents are not vaccinating their children because of worries about potential side effects of vaccines. How do we get people to overcome their objections to vaccines?

Quick: The concerns about vaccine safety go way back to the earliest smallpox vaccines a couple of hundred years ago. Vaccine production and testing has gotten much, much, much safer. The vaccines that are on the market today are really well-proven.

The problem that we’ve had with the measles vaccine was actually started by a false article in one of the leading medical journals 20 years ago, which has gotten this idea implanted in many people’s minds that the vaccine will cause autism. The evidence is overwhelming that it doesn’t.

We do have a challenge in people understanding the safety of vaccines, and that has to be, again, a multi-part communication process. People who strongly believe that a vaccine causes harm to their children aren’t actually convinced by more evidence. They need to be convinced by another mother who has lost a child to a preventable disease because the child didn’t get vaccinated. We’re seeing more and more of that kind of communication.