In an interview this summer, Paul Graham, co-founder of Y Combinator — the tech accelerator that has funded a number of successful start-ups including Dropbox, Airbnb and Reddit — made a comment about how he evaluates potential companies that managed to both offend many foreign-born Silicon Valley entrepreneurs and reveal a prejudice common among venture capitalists.

“One quality that’s a really bad indication is a CEO with a strong foreign accent,” Graham told Inc. magazine. “I’m not sure why. It could be that there are a bunch of subtle things entrepreneurs have to communicate and [you] can’t [do that] if you have a strong accent. Or, it could be that anyone with half a brain would realize you’re going to be more successful if you speak idiomatic English, so they must just be clueless if they haven’t gotten rid of their strong accent.”

The remark unleashed a backlash on social media directed at “Silicon Valley ignorance.” The interview also became the lead story on Gawker’s widely read ValleyWag online magazine. (Graham later took to his own blog to make his point clearer.)

But according to a new study by Wharton management professor Laura Huang, Graham’s comment — while insulting to many start-up chiefs — is not surprising. Huang’s paper, “Political skill: Explaining the Effects of Nonnative Accent on Managerial Hiring and Entrepreneurial Investment Decisions,” uncovers a widespread bias in the business community against nonnative English speakers: Entrepreneurs with nonnative accents, she notes, are significantly less likely to receive new-venture funding, and job candidates with nonnative accents are also less likely to be recommended for management positions. The paper was published in the Journal of Applied Psychology in November.

“Political skill is one of those things where you know it when you see it: It is not only effective and competent communication; it’s also the ability to be perceptive and to influence others.”

“The increased globalization of the professional world means that there are more workers who are nonnative speakers of English,” says Huang, who conducted the research with Marcia Frideger, a professor at Holy Names University, and Jone Pearce, a professor at the University of California, Irvine and the London School of Economics and Political Science.

“They might get technical jobs, but as a group, they face both a glass ceiling when it comes to being promoted to the executive level and discrimination getting financial support for their new business ideas,” Huang notes.

According to a recent report from the United Nations, 214 million people — one out of every 33 humans on the planet — work in a nation other than their birth country. Immigrants work at all occupational levels and in virtually every locale in the world. At the same time, English increasingly has become the “language of business” around the globe, with an estimated one billion nonnative speakers of English in the workplace.

While a nonnative accent is, according to Huang, “an explicit stigmatizing mark of foreignness,” the larger issue is that nonnative English speakers are deemed less “politically skilled” than native speakers. “Political skill is one of those things where you know it when you see it: It is not only effective and competent communication; it’s also the ability to be perceptive and to influence others,” she says. “It has become an increasingly important soft skill in both executive and entrepreneurial settings.”

But perceived political skill often comes down to a snap judgment. Consider, for instance, the ways in which job candidates and new venture leaders are assessed today. To recruit for high-level positions, companies increasingly use executive search firms. Most preliminary interviews with headhunters take place over the telephone. Similarly, venture capitalists and other investors tend to make funding decisions based on short pitches, whereby entrepreneurs who have founded their own start-up ventures give five- to 10-minute long presentations in hopes of receiving an infusion of cash.

“The fact that these initial screens make nonnative accents a prominent feature of the conversation highlights the challenges faced by nonnative speakers. The focus is shifted from the quality of their ideas to the quality of their spoken English,” Huang notes. “At the same time, this bias is something that nonnative speakers — and, for that matter, hiring professionals and new-venture investors — can actively mitigate, which is why it is so important to understand it.”

Huang and her co-authors ran two experiments. In the first, participants were told to make evaluations of job candidates that would ostensibly be compared with assessments by professional job interviewers. Participants were given a description for a middle-management marketing director and a résumé of the job candidate, which included a photograph. They then listened to an audio recording, which played excerpts of a candidate being interviewed for the managerial job. (The job applicants were of similar age and educational background, and the scripts for the candidate and the interviewer were identical in each recording.)

After listening to the audio recording, participants filled out a questionnaire and rated whether or not they would recommend hiring the candidate for the job. Huang and her colleagues found that nonnative-accented speakers — identical in every respect to native speakers save their accents — were 16% less likely to be offered executive positions.

The second study involved videos of a sample of 90 entrepreneurial pitches delivered over a three-year period at three top technology pitch competitions in the U.S. After watching a video of the pitch, participants evaluated the entrepreneurs’ accents, skills and attractiveness on a short questionnaire. These evaluations were compared to the likelihood that entrepreneurs received funding. The researchers found that entrepreneurs with nonnative accents were 23% less likely to receive investment funding than native-accented entrepreneurs.

One potential solution to this challenge has been to suggest that those with nonnative accents should seek out voice training to help them develop accents more closely approaching the standard for the society in which they work. “But changing your accent is very difficult, and there is evidence that people who change their accents may incur social penalties from their immigrant group who see them as dis-owning where they came from,” Huang points out.

“The lesson for nonnative English speakers is that you can inoculate yourself from this by explicitly addressing the problem.”

Instead, Huang and her colleagues propose a realistic — and perhaps more effective — coping mechanism for those with nonnative accents: tackling the issue head on. “The lesson for nonnative English speakers is that you can inoculate yourself from this by explicitly addressing the problem,” Huang says. “Find a way to indicate that you have strong political skills. Tell the hiring committee: ‘I know some might think my accent means that I would be less willing to fight for resources, but I am very vocal when it comes to making sure my employees have the tools they need.’ Or say to the investor: ‘People might think that because I have an accent I won’t listen to clients well, but I have a strong work history of being very responsive and open with customers.’”

Human resource professionals and venture funders are not off the hook, however. “They need to be aware of this bias,” Huang notes. “When they are interviewing a potential candidate or evaluating a pitch presentation by someone who is not a native speaker, they should ask themselves: ‘What am I attributing to this person? Is this person politically skilled?’” 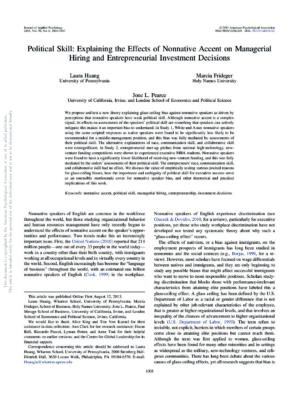