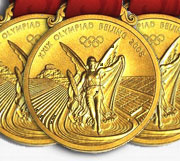 As emerging Asian economies, India and China are often viewed as peers. The recent summer Olympic Games in Beijing showed, however, that in sports the comparison falls apart. China won 100 medals, the second highest after the U.S.; India won three, including its first-ever gold medal for an individual event. India’s performance at the Beijing Olympics matched that of Latvia and Mexico and was well below that of countries such as Mongolia and Kazakhstan. Why do Indians fare so poorly at the Olympics? In this opinion piece, V. Raghunathan, author of Games Indians Play, offers his diagnosis of what ails Indian sports and prescribes a few remedies. Raghunathan is the CEO of GMR Varalakshmi Foundation and a former professor at the Indian Institute of Management, Ahmedabad.

Abhinav Bindra’s gold medal in 10m shooting in the Beijing summer games last month is the first-ever for India in an individual event in 112 years of Olympics history. I don’t know if, as a fellow Indian, I should feel happy or embarrassed — because in some ways Bindra’s success also underlines 112 years of our inadequacy as a nation.

One might have been happier had Bindra been thrown up by the Indian sports system, holding out a glimmer of hope that at last things are beginning to stir. But that is not the case. Bindra’s gold is entirely his own. Though various state governments are jostling to bask in reflected glory, the fact is that except for Bindra’s affluent parents, no one can claim an iota of credit for his achievement. In addition to that single gold, India won two bronze medals, which went to Sushil Kumar and Vijender Kumar for boxing and wrestling. (Could that have been despite our system, rather than because of it?) India’s final tally of three medals matched that of Latvia and Mexico and was well below that of countries such as Mongolia and Kazakhstan.

India’s performance at the Beijing Olympics raises several frequently asked questions: Why should a country of a billion-plus people have such an abysmal record in sports, barring cricket or maybe hockey in the distant past? Why should India have won only three Olympic medals since 1984, while China managed 420 in the same period — including 100 in the Beijing games? Even if we make allowances for India’s democracy versus China’s authoritarian system — which plucks promising children and places them in state-run institutions to train them with clinical efficiency into medal winners — surely we can’t get away from our abject track record (no pun intended)?

My answers to these questions take me back to four of the 10 characteristics of Indian-ness that I had listed in my book Games Indians Play: Why We Are the Way We Are (Penguin, 2006). These are: Our fatalistic outlook; our inability to follow or implement systems; our deep-rooted corruption; and our mistaking talk for action.

Fatalism: I have heard people blame our physical build, dietary habits and vegetarianism — and hence our smaller stature and lower stamina — for our poor performance at the summer Olympics. The sum total of these arguments seems to be, “We are like that,” and not much can be done about it.

At a stretch, there may be something to the argument that certain people seem to have inherent advantages in certain sports. The typically lean and tall Africans may appear to be more naturally athletic and hence more suited to track and field events or games like basketball. Similarly, the Chinese are often regarded as more petit and supple and hence good at gymnastics. But such arguments are at best self-defeating and, at worst, they can verge on being racist. Scores of counter examples exist to show that “bumblebees” do fly. For example, China’s medals are hardly restricted to gymnastics, and for that matter, the well-built Americans have excelled in gymnastics as well.

As for our diet, only 16% of Indians are vegetarian. Also, if we assume that at least 0.27% of the Indian population is perhaps as well built as people on average elsewhere in the world, that gives us some 3.1 million outliers from a population of 1.15 billion. Assuming that only 10% of these have the right profile to compete at the highest level of sports, that is still a healthy 310,000. So surely India does not lack people with the appropriate physical stature to be trained in sports. Clearly, our fatalism gets the better of us and we accept the status quo fairly easily.

Failure to follow or implement systems: In India, we are poor at operating standardized systems. That is why we can build anything, but maintain nothing. We build highways and flyovers, but never maintain them; we build stadiums and playgrounds, but never manage them; we build canals, but never de-silt them; we construct impressive buildings, but let them go to seed. We build complex power generating projects and then operate them at 35% capacity. I could go on and on… In short, we can manage one-time creations, but not operate ongoing systems efficiently.

It is the same in sports. We have created any number of sports organizations but they hardly work as they are meant to. Rules for selecting the best candidates are bent, broken, warped, twisted and ignored, paving the way for mediocrity, degeneration and collapse. Politicians routinely commandeer the democratic mechanisms created in these organizations to elect office bearers.

Consider these examples: Suresh Kalmadi, a former minister of railways and an active Congress politician, heads the Indian Olympics Association. Sharad Pawar, the Union agriculture minister and a former candidate for the prime minister’s office, heads the Board of Control for Cricket in India. V.K. Malhotra, deputy head of the Bharatiya Janata Party in Parliament, oversees the Archery Federation of India. Priya Ranjan Das Munshi, a former minister of information and broadcasting and an active Congress politician, leads the All India Football Federation. The Union railways minister, Lalloo Prasad Yadav, heads the Bihar Cricket Association. K.P.S. Gill, a former police officer, has led the Indian Hockey Federation for 14 years, even as Indian Hockey failed to qualify for the Olympics. Other organizations for sports such as table tennis, boxing, archery and judo are also led by politicians whose expertise in or knowledge of these games is at best tenuous.

Even if we assume that such organizations need not be headed by sports experts or former athletes, would not professional managers be more suitable than politicians to run them as institutions of excellence?

Corruption: From politicians to corruption is a natural progression. Recent reports of graft and corruption in some organizations testify to this sad reality. I don’t mean to argue that politicians are the only corrupt class in India. They undoubtedly have lots of competition, but as a group, our politicians ought to get the Olympics gold.

Substituting talk for action: When they assume office as leaders of sports organizations, most of these political bosses promise the moon. They outline how they will bring to bear their national-level experience and bring glory to the country in three years. In reality, however, they end up hijacking much of the meager budget allocated for sports, leaving crumbs for the athletes. There is no strategy, no action plan, no working hard at getting there. Consequently, the promised results are rarely forthcoming. What is left is a yawning gap between words and action, year after year. These political bosses, who cannot be fired for non-performance, are hardly accountable to anyone.

What can be done to improve India’s performance in sports in general and the Olympic games in particular? Here are a few suggestions:

Work on the governance model of sports organizations: First, we need to ask whether the leadership of sports organizations should be chosen through elections or if they need to be operated as professional institutions. Elections may have a place in social clubs and political parties, but it is unclear if, in the Indian context, they offer the right model for a field-level sports organization that is driven by excellence. We have several national level institutions of excellence such as the Indian Institutes of Technology, Indian Institutes of Management and Indian Institutes of Science, to name just a few. All of these enjoy operational autonomy and are free of political interference. Sports organizations must adopt a similar structure. Their members should not let politicians hijack their institutions. If the politicians still manage to act in ways that promote political ends rather than the goals of the sport, perhaps the rest of the office bearers could resign en masse.

Work with public-private partnerships and tax incentives for sports infrastructure: The notion of setting up public-private partnerships for sports holds huge promise. That the government cannot deliver quality has been proven by decades of its track record. The state governments should invite bids from private corporations to run stadiums, training institutions and competitions at various levels, with agreed performance parameters for a variety of sports. These facilities should not be concentrated in state capitals, but be more widespread. For example, archery competitions could be held around our tribal belts where natural talent and skills abound.

Perhaps the government should consider a tax holiday for all investments in creation of sports infrastructure by the private sector, along with larger investment credits as candidates trained by them win medals in international sports competitions. Such measures will not only bring more resources to sports organizations, but they will also help raise the standards of sports all around.

Focus on a wider catch in the sports net and not the prize catch: As a country we need to concentrate on increasing the participation level in sports and raising the average standards, rather than focus on a few individuals as we usually seem to do. This is precisely what the Indian Premier League (IPL) and the Indian Cricket League have set out to do with cricket — they are trying to cast the net wider. Offering this model may be their most significant contribution to Indian sports in general. A case could be made for large Indian corporations to create IPL-like models for hockey, football and other sports.

Each of our states, which are comparable in size and population to European countries, must have its own heroes and heroines in a dozen sports. Competitions at various levels (regional, district, state, zones and national) need to be far more systematic, so that our top sports persons are drawn from a large pool of people participating in sports. This will increase competition and throw up more promising athletes. We need an “Indian Olympics” that throws up truly world-class performers.

Make sports an integral part of our educational system: The Central Board of Secondary Education and state governments must take inter-school sports competitions more seriously and systematically and conduct them more methodically. There must be enough resources for students identified for intensive training. More importantly, their programs should be audited to ensure that the resources are actually spent on training and nutrition and not frittered away by the administrators. A significant reason for average lack of physical size and stamina is due to poor nutrition in early years.

Don’t make cricket the ‘fall guy’: The focus on cricket is often blamed for our poor performance in other sports. That hardly seems like the right diagnosis of our overall sporting ailment. In the U.S., baseball, and in Europe, soccer, are far larger sports in financial terms than cricket is in India. And yet other sports thrive in the U.S. and Europe, and the U.S. still wins more Olympic medals than any other country in the world — it won 110 in the recent Beijing Olympics. While there is certainly a need to raise the level of sports in India, dragging cricket down is not the way to go about it. Cricket is not in a zero-sum game with other sports. Let us remember, sports are all about fair competition. It is up to the other sports to figure out ways they can compete with cricket for popularity.