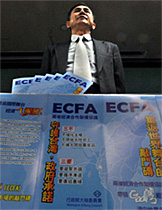 The popularity of free-trade agreements (FTAs) are something like national fashion statements — in one day, out the next. Not that the 23 million citizens of Taiwan have expert knowledge of such matters. Long blocked in one way or another by the People’s Republic of China from joining them, Taiwan has sat on the sidelines. Apart from a small number of FTAs, Taiwan has done without the no or low bilateral or multilateral trade tariffs accorded other export-dependent economies.

Even so, there probably wasn’t much celebrating to mark the first anniversary of the signing of Taiwan’s and China’s groundbreaking Economic Cooperation Framework Agreement (ECFA) at the end of June. Indeed, ECFA is as controversial today as ever, putting under scrutiny the China-friendly policies of Ma Ying-jeou, Taiwan’s president who is up for re-election early next year, and the 539 categories of Taiwanese exports to China falling under ECFA.

ECFA’s proponents in Taiwan see it as a way of addressing a major weakness in the global trade strategy of the island. Cheryl Tseng, director-general of the government’s Overall Planning Department of the Council for Economic Planning and Development at the Executive Yuan, notes that before last year, Taiwan’s only trade pacts were with a few Central American and Caribbean nations. “Those five countries – Panama, the Dominican Republic, Honduras, Guatemala and El Salvador — collectively provide less than 0.5% of our foreign trade,” says Tseng.

In contrast, mainland China accounted for 31% of Taiwan’s exports and 15% of its imports last year. Roy Chun Lee, associate research fellow at the Taiwan WTO Center, notes, “A free trade agreement [FTA] with one’s single-largest trading partner is a milestone for any country that depends on foreign trade, like Taiwan does.” He adds that it’s an important step — although more of a symbolic one, “because the actual tariff reductions will take place over the next five to 10 years.”

But is the FTA a lopsided one? “There is a giant sucking sound coming from China” observes Z. John Zhang, a Wharton marketing professor. ECFA is “a very intelligent move for China [because it] puts Taiwan further in the orbit of the mainland.”

According to Wharton management professor Marshall W. Meyer, “The Chinese are focusing on using trade to expand their influence.” ECFA has been a way for China to strengthen its bid for cross-Strait unification, he notes, by increasing trade rather than pursuing military means to regain Taiwan.

Lee also wonders whether ECFA will open the door to aggressive Chinese M&A. “That is something we should be worried about, given the fact that at least some people in China are hostile to Taiwan,” he says. Takeovers could be particularly worrisome if target companies have critical, high-value technologies, he adds.

Some say this is a storm in teacup. In the bigger scheme of things, Taiwan’s economic prosperity has been cemented the global exporting success of its high-tech companies, which produced 95.5% of the world’s motherboards, 95.3% of its notebook PCs and 90.7% of its netbook PCs in 2009. Despite longstanding political tensions with mainland China, many Taiwanese companies have been shipping products labeled “Made in China” for years. “At some point, it becomes hard to tell if they are really Taiwanese companies or Chinese companies, since so much of their business is in China,” says Zhang.

Billy Ho, CEO of MiTAC, a Taipei-based manufacturer of electronic devices, says, “ECFA will give more competitiveness for Taiwanese companies in the high-tech business [in China], all the way from upstream materials to devices to components to downstream products.” Established in 1982, MiTAC built its own brand of PC, and then designed PCs for Compaq, among others. In the late 1990s, it made PDA devices for HP. As costs rose in Taiwan, MiTAC closed its last factory on the island in 2006. Now, it employs over 10,000 workers in mainland China and 1,400 in Taiwan.

“The most sophisticated processes [at MiTAC] will stay in Taiwan, and we will release the less sophisticated processes to China, close to the market,” Ho says. Another major benefit will be that “Taiwanese companies may have more access to Chinese government contracts, because more of their business will be in China.” ECFA should also help Taiwanese high-value added firms such as MiTAC expand their sales outside China. According to Ho, “Free trade is a megatrend, and while most IT products already have very low or no duties, this will help us with some products in some countries.”