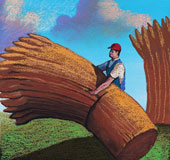 Before the tumult of the Arab Spring, one of the biggest challenges to the rule of then-Egyptian president Hosni Mubarak was a lack of bread. In the summer of 2008, long queues and short tempers over bread shortages were enough that the army was called in to bake and distribute loaves to Egypt’s poorest.

Egypt’s bread protests were soon forgotten. But there now is a growing consensus among analysts and policymakers that rising food costs and food shortages are contributing to the region’s unrest. In a new briefing by the International Food Policy Research Institute (IFPRI), a Washington, D.C.-based think tank, researchers detail some aspects of the Middle East’s food security concerns, and how they relate to the ongoing turmoil.

“People’s satisfaction with their standard of living has deteriorated in most Arab countries in recent years, especially in Egypt, Libya, Bahrain and other countries with civil disobedience,” noted the authors of the brief, “Economics of the Arab Awakening: From Revolution to Transformation and Food Security“, which included all of the Arab countries in the Middle East and Africa.

Food security has worsened in most Arab countries, the authors wrote, due to high food-price inflation. For instance, in Egypt, according to the World Bank, year-on-year food inflation in February was at 19%. “The proportion of people without enough money to buy food increased or remained unchanged in all but one of 12 countries examined,” the IFPRI brief stated. “Egypt and Sudan saw particularly large increases.”

Even in oil-rich Gulf countries, concerns over food price inflation have resulted in various government actions, including planning food reserves and forcing retailers to heavily discount certain basic foodstuffs. In the United Arab Emirates (UAE), the federal government has gone further, asking food retailers to agree to a six-month price freeze on certain items, while conducting store inspections to ensure prices do not increase in the month of Ramadan, when Muslim shoppers tend to buy more groceries. Prices for edible oil, sugars and rices last year in the UAE rose by 50%, according to local media reports.

These food security concerns have also led some Gulf countries to purchase farmlands in other countries for their own food production needs. The UAE has become one of the top purchasers of global farmland, according to IFPRI, while Saudi Arabia has made a number of farmland purchases in Africa. Government officials say that with direct access to food crops, they can save on import spending.

In an Arabic Knowledge at Wharton story about Middle Eastern countries investing in farmlands in Africa, Wharton management professor Stephen J. Kobrin said such land purchases risk reviving a colonial system in which large tracts are controlled by overseas interests that hire many of their own people, reducing the economic benefits to the host country. “The big question is, are you developing local skills or just creating an outpost of the investor country?” Kobrin noted.

And more immediate, easier solutions for Arab countries to reduce import spending costs are available, according to an analysis by the World Bank, including improving logistics efficiency, and using risk-management tools to reduce exposure to price volatility and shocks.

The IFPRI brief also questions some of the measures Arab countries have taken in the wake of the unrest, such as raising civil employee salaries and lowering import tariffs. “Most, if not all, of these ‘firefighting’ measures were used by Arab governments before,” the brief states. “These popular but costly responses have been inefficient in stimu­lating sustainable growth and poverty reduc­tion. “

The authors recommend that Arab governments facing food security issues should seek to improve their “trade agreements, logistics and infrastructure, as well as support for the agriculture sector in countries with agri­cultural potential.”

While the authors acknowledge that it is beyond the report’s scope to determine how large a role living standards and food security played in triggering the revolutions, “results clearly show that in most Arab countries, both indicators have worsened.”