Europe is in the midst of three major financial restructurings: the banking union, capital markets union and the deepening of economic and monetary union. Each will make Europe’s financial and business worlds more efficient and competitive, advocates say. For example, the European Central Bank’s Single Supervisory Mechanism now directly oversees 129 financial institutions or 82% of the euro area’s total banking assets. “So instead of running large compliance and legal departments in 19 euro area jurisdictions and complying with 19 different sets of regulations, one centralized function dealing with the SSM will now suffice,” according to Kalin Anev Janse, who is secretary general and also a member of the management board of the European Stability Mechanism (the eurozone’s lender of last resort).

In this opinion piece, he explains the three big changes and why he believes they will improve Europe’s financial markets.

Europe has emerged out of the biggest recession in 80 years’ time, and it is doing so armed with new initiatives that should fundamentally change the economic and business environment. Over the last few years, Europe has launched three flagship projects: banking union, capital markets union and the deepening of economic and monetary union (figure 1). Europe also faces some tremendous new challenges: integrating more than a million migrants, a low interest rate environment and growing excess liquidity.

The euro crisis proved that Europe was not ready to deal with cross-border banking problems. Financial institutions were supervised and resolved, in case of bankruptcy, nationally. Countries with large financial sectors, like Ireland, were overstretched and bank bailouts meant the country’s bailout. To tackle the problem, Europe acted fast, creating the Banking Union within two years. This was a game changer. Between 2012 and 2014, Europe’s largest financial institutions – including Deutsche Bank, BNP Paribas and ING – moved to European from national supervision. This new watchdog, the European Central Bank’s Single Supervisory Mechanism (SSM), directly oversees a total of 129 financial institutions, representing 82% of the euro area’s total banking assets. 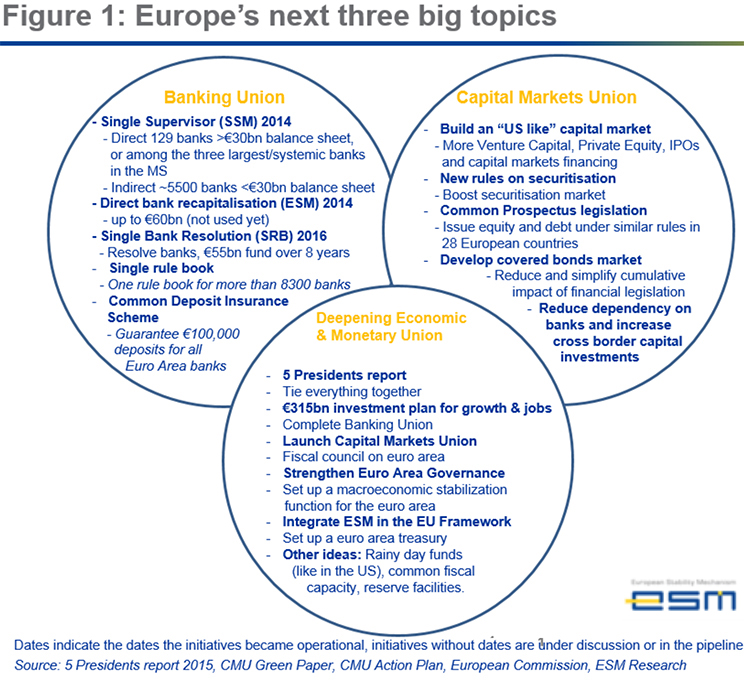 During the same period, the U.S. Federal Reserve performed a similar exercise for the 31 largest U.S. banks, representing more than 80% of the country’s assets. Large financial institutions must these days deal with two powerful supervisors.

Europe’s banking union is further on the move. On January 1, 2016, the new European mechanism to resolve failing banks went live. The Single Resolution Mechanism’s (SRM) goal is to resolve failing banks at the lowest cost to taxpayers. It includes the participation of the private sector, such as unsecured depositors or junior creditors, according to the bail-in rules under the Bank Recovery and Resolution Directive. Additionally, SRM-covered banks need to provide $59 billion in funding over the next eight years to create the Single Resolution Fund (SRF). While this means higher costs for banks, it reduces the need for taxpayers to bail out banks.

The final step to completing the banking union is a common deposit guarantee scheme similar to the U.S.’s Federal Deposit Insurance Corporation (FDIC).

The final step to completing the banking union is a common deposit guarantee scheme similar to the U.S.’s Federal Deposit Insurance Corporation (FDIC). In 2016, a European Commission proposal to establish a European Deposit Insurance Scheme (EDIS) will be hotly debated. The aim is to guarantee individual deposits up to $108,000 at all banks in the euro area – benefiting around 340 million citizens in 19 countries. When this is implemented, both sides of the Atlantic Ocean (figure 2) will share a similar approach to supervision, stress testing, resolution, and deposit guarantees.

Big Topic 2: The World Is About to Change for Market Players – Capital Markets Union

While the banking union is advancing at rapid speed, Europe also launched another big project last year: the capital markets union (CMU). The CMU’s goal is to create deeper and more integrated capital markets. Traditionally, Europe has been dominated by bank financing: When an entrepreneur needed funding, banks were the go-to partner. During the crisis, banks tried to reduce their risk exposure and, as a result, financing for entrepreneurs, small- and medium-sized enterprises (SMEs) and some corporations dried up. The CMU aims to address this issue. 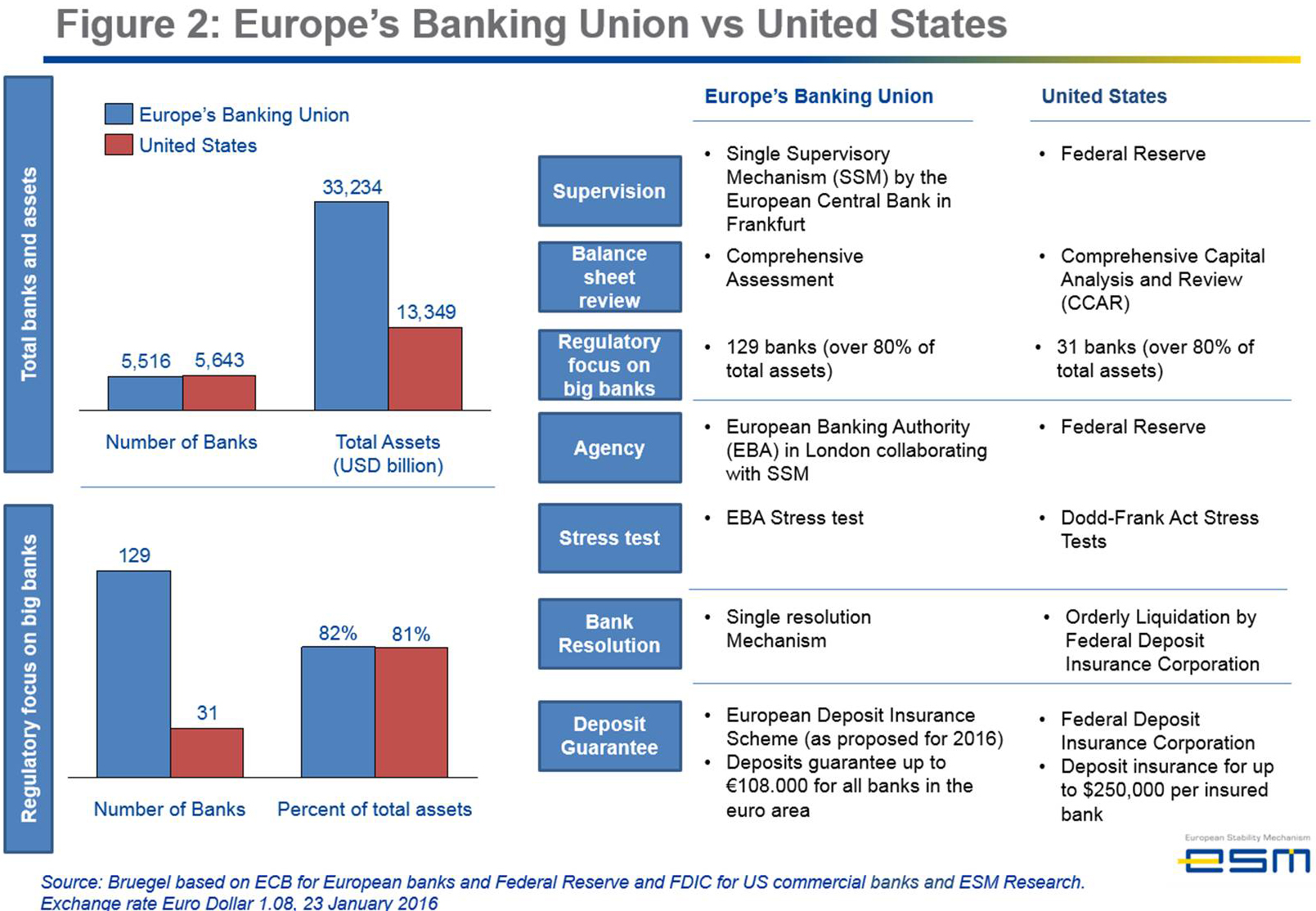 The differences on the two sides of the Atlantic Ocean are large. Banking union bank assets total $33.2 trillion compared to just $13.4 trillion in the U.S. (figure 2), a gap explained by the source of financing (figure 3). Euro area banking credit reaches some 170% of GDP, but in the U.S., just 45% of GDP. Stock market capitalization and debt securities are respectively some 45% and 10% of GDP in the euro area and 110% and 45% in the U.S. 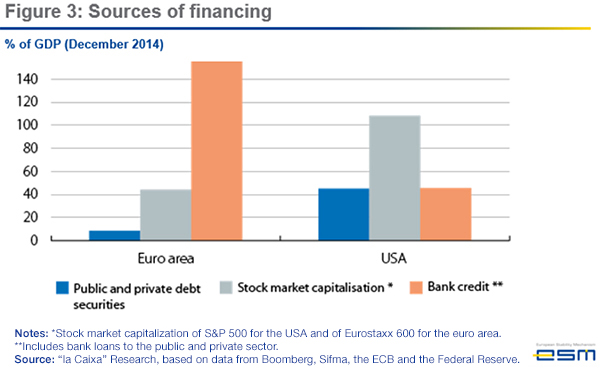 The CMU initiative could transform Europe’s capital markets over the 2016–2019 period. The CMU is designed to reduce dependency on banks. It should increase the flow of funding from venture capital, to private equity, to IPOs, and eventually equity and debt capital market financing. It aims to standardise prospectus legislation across countries (currently there are large differences across European countries, not to mention the different language requirements), grow the covered bond market, develop a stronger securitization market, align bankruptcy laws and stimulate more cross-border capital investments. Despite the challenges, Europe has strong foundations to build on. It is home to some of the largest pension funds in the world (figure 4) and countries with strong household savings habits, such as Sweden, Germany and the Netherlands. 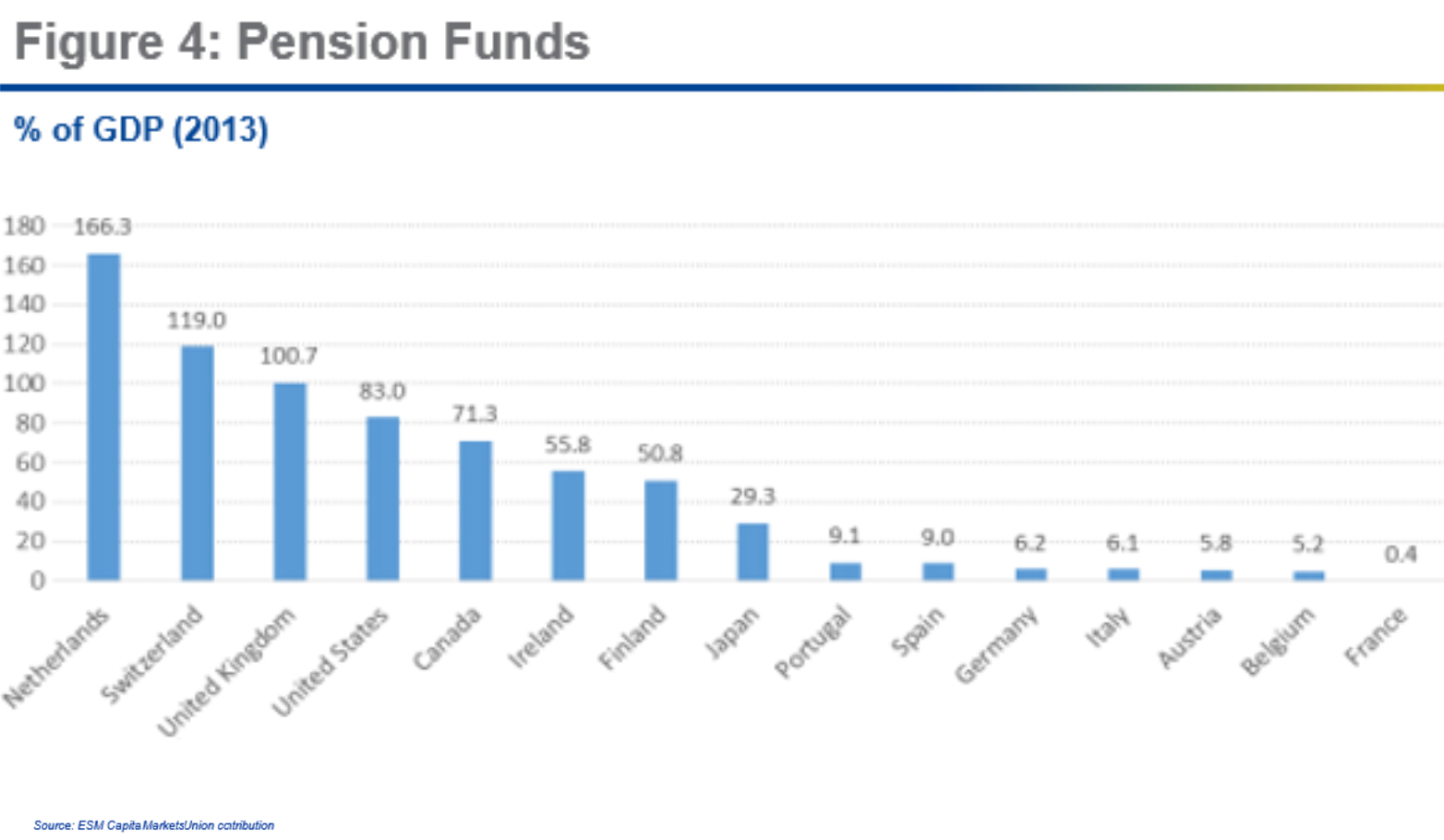 Big Topic 3: Bringing It All Together – Deepening Economic and Monetary Union (EMU)

The Presidents of the European Central Bank, Eurogroup, European Commission, European Council and European Parliament presented a plan, the Five Presidents Report, to further deepen economic and monetary union over the next 10 years, or through 2025. The goal is to pull all these initiatives together, complete the banking union, make progress on the capital markets union and introduce new initiatives for the euro area. The latter could include establishing a new fiscal council concentrating on the euro area, a euro area macroeconomic stabilization function and a euro area treasury.

Combining these initiatives has one big advantage: It would allow for better risk-sharing across the euro area and reduce the need for the public sector to divert taxpayer money into shock absorption.

Combining these initiatives has one big advantage: It would allow for better risk-sharing across the euro area and reduce the need for the public sector to divert taxpayer money into shock absorption. In the U.S., economic and business cycles are smoothed out across the 50 states to a much greater degree than in Europe, with market mechanisms doing the lion’s share of the work (figure 5). Fiscal transfers play only a limited role. About 75% of economic and business cycle shocks in the U.S. are smoothed, 62% by financial market transactions and only about 13% through fiscal risk-sharing involving the public sector and taxpayer monies. This underscores how important it is for Europe to complete the banking union, implement CMU, and deepen the EMU. 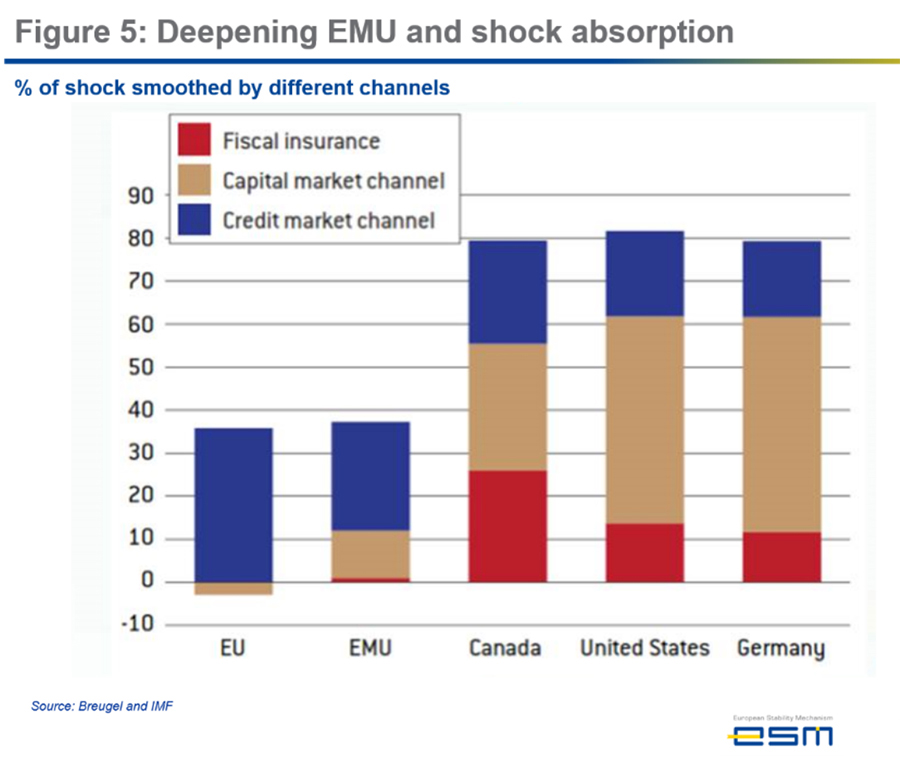 While Europe already has a very ambitious agenda for the next 10 years, it faces some significant new challenges. More than 1 million migrants arrived in 2015 and many more are expected in 2016. A low interest rate environment is making it tougher for insurance companies and pension funds to generate returns and the excess liquidity flooding financial markets is potentially feeding future risks. These challenges are leading to tough debates in many European countries, creating headwinds for progress on Europe’s three big topics.

What Does this Mean for the Business World?

Europe’s banking union brought about abrupt change for banks: Many had neither expected nor prepared for it. Banking union was a quantum change, as banks had developed close relations with their local supervisors. These days, Frankfurt and the policy world determine the rules of the game. To cope with preparations for its first comprehensive assessment, Société Générale, for example, marshalled a team of 800 employees and more than 100 ECB, EBA (European Banking Authority) and ACPR (French Prudential Supervision and Resolution Authority) staff members. The bank said, “The exercise resulted in the examination of more than 9 million credit lines and 500 million data, as well as the analysis of 2,300 individual credit files, over a period of nearly a year.” While the first review was tough, the change to central supervision will create great efficiencies for banks in the future. Instead of running large compliance and legal departments in 19 euro area jurisdictions and complying with 19 different sets of regulations, one centralized function dealing with the SSM will now suffice.

Instead of running large compliance and legal departments in 19 euro area jurisdictions and complying with 19 different sets of regulations, one centralized function dealing with the SSM will now suffice.

It is crucial for businesses to closely follow advances in the three big topics. The best informed can reap huge benefits from many of these initiatives, given significant first-mover advantages. The capital markets union will create new opportunities for investors and new funding sources for entrepreneurs, SMEs, and large corporations globally.

The first banks to create new products under the securitization initiative may well be setting the new market standard, the new prospective legislation will make it easier to issue securities across all EU countries, the covered bond market will open up new financing opportunities, and a stronger equity and debt capital market will increase the equity capital markets (ECM) and debt capital markets (DCM) business for those banks that first come to grips with the changes. Lastly, easing EU cross-border capital investment means that companies can start tapping retail, wholesale and institutional investors across 28 countries and 500 million citizens. This will benefit Europe’s population as well (e.g. more investment options, diversification of their assets and more market vs. fiscal risk-sharing requiring less taxpayer money).

The changes above will create many new opportunities. The winners of the game will be the businesses that allocate executive time to follow these changes, invest in understanding their implications and rapidly turn them to their advantage.