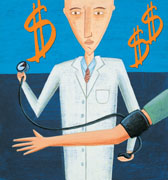 Much of the slowdown is due to a typical insurance underwriting cycle, but employers have also shifted costs to employees and emphasized wellness programs and consumer-driven plans to hold down cost increases, according to Wharton faculty and health benefits experts.

The average total health benefit cost per employee rose 10.3% last year, to $6,215, following a 15% increase in 2002, according to Mercer Human Resource Consulting. “There does seem to be some light at the end of the tunnel,” says Mark Pauly, chairman of the health care systems department at Wharton.

Lawton Burns, professor of health care systems at Wharton, says the major reason for today’s slower health care cost increases is the insurance cycle. “There is a somewhat predictable cycle in health insurance spending growth,” he says. “The underwriting cycle has just started the downward slide in the rate of increase. Costs will continue to rise, but at a slower rate and next year it will be lower.”

At this stage in the cycle, according to Burns, insurance companies that have been earning fat premiums for several years are now attracting new competition, which in turn has sparked battles for market share, thereby driving down the rate of premium increases. Rates will continue to grow at a slower rate until some players drop out and those that remain have enough power to push rates higher.

“It used to be three years up and three years down in the 1970s and 1980s. It was extremely predictable for 20 years,” says Burns, adding that the current cycle has become elongated, with rate increases beginning to accelerate in 1996 and abating in 2002. “In the 1990s and early 2000s it has lengthened to six years up and six down.”

The decline in costs in the early 1990s, which is often attributed to the rise of health maintenance organizations, had more to do with this natural insurance cycle than stingy HMOs, states Burns, who warns policymakers to take the cycle into account when developing health care initiatives. “Everybody declared victory over health care costs in 1996 and attributed it to HMOs, but in fact it was just the low point in the cycle.”

The rate of growth in claims is also slowing, particularly the cost of prescription drugs, says Pauly. While it is still the fastest growing sector in health care, the rate of increase in drug spending is expected to drop to 12.9% this year from 13.4% last year, according to the Centers for Medicare and Medicaid Services.

Meanwhile, hospitals’ inpatient revenue is softening while outpatient business is up sharply and labor rates are stabilizing, Pauly adds. “We have gone through another type of cycle which is the cycle of rising real wages for [hospital staff].” The labor shortage is easing as higher wages bring nurses back into hospitals and draw nurses from abroad into the United States . Foreign workers, he says, are the “ultimate adjustor” in bringing the supply of nurses into balance.

Watson Wyatt found that 98% of companies surveyed felt a responsibility to provide health coverage for active employees, but only 23% felt it was necessary to cover retirees. So far, says Pauly, companies have not dropped retiree benefits, although he says insurers may be adjusting rates down in anticipation of a future decline in retiree coverage.

Another hot button for the medical community is malpractice insurance. Here, says Pauly, concerns over insurance rate hikes appear to have cooled as that industry also passes through a cycle. Premiums saw huge increases for a while, but now have slowed down, he suggests, adding, however, that high premiums will at some point “be back as an issue.”

Sean Nicholson, former professor of health care systems at Wharton who is now at Cornell, attributes the slowdown in spending increases to yet another cycle: During the years in which HMOs had significant clout, many workers put off seeking specialty care. Then, in the late 1990s, as the power of HMOs waned, those workers had greater access to medical care and sought out services they had delayed, driving up overall health costs. Now, he says, it may be that the pent-up demand for health care has been satisfied, slowing the rate of health care spending increases.

Another explanation for the slowdown is the rise of tiered drug co-payments that require employees to pay a greater share of the cost of new high-priced drugs as opposed to cheaper generics. At some point, says Nicholson, when consumers are routinely paying $20-$50 for a prescription, they “are going to scale back.” Nicholson suggests that drug-spending increases are likely to remain subdued because of a lack of new product introductions from the pharmaceutical industry. But the impact on employers’ costs may not be big, he adds: Drug spending still accounts for only 12-15% of all health care expenses.

The value of medical treatment is difficult to measure if you look simply at prices, says Ernst R. Berndt, professor of applied economics at the Massachusetts Institute of Technology. Berndt is working to develop models that take into account substitution of more expensive treatments such as surgery, with lower cost options such as pharmaceuticals or outpatient treatments.

In a study of 12,864 Florida Medicaid patients during the periods of 1994 to 1995 and 1999 to 2000, Berndt found that while the cost of treatment for schizophrenia rose 0.5% a year, spending actually fell 5.5% when the study factored in treatment quality and patient characteristics. “The costs of treating the illnesses are falling over time and the same budget can provide greater therapy to a greater number of people, so that is good news,” says Berndt, adding that the Bureau of Labor Statistics is trying to develop ways to factor substitution into measures of medical spending.

Despite the slowdown in health care premium increases, employers remain concerned about the impact of employee health plans on the bottom line. A survey by Watson Wyatt Worldwide found only 24% of companies would be willing to absorb future health care cost increases, compared to 52% in 2000. Of 450 companies surveyed, 41% reported they are over budget for health care spending in 2004.

Indeed, an article in the Wall Street Journal on July 13 describes the struggle by American businesses to control health care expenses as “nearing crisis levels. Despite recent benefit cuts, U.S. employers still pay the majority of health care costs for more than 130 million Americans and have borne the brunt of double-digit annual increases. General Motors Corp., for example, says it spends ‘significantly’ more on health care than steel.”

The Journal article profiles the efforts of Pitney Bowes Inc. – a mailing equipment and services company based in Stamford , Conn. – to contain health costs for its 46,000 employees and families. The company cites a number of reasons for ever-spiraling health care costs: “local hospital mergers, entrepreneurial doctors prescribing costly MRIs and CT-scans at their own private clinics, and marketing for expensive drugs.” The Journal story also points out that Pitney Bowes has succeeded in reducing overall costs somewhat “by increasing employee contributions and winning discounts on certain drugs and services.”

Blaine Bos, author of the Mercer health care study, says that in 2003, employers made significant cuts in benefits. While underlying costs were up 13-14%, employers kept their increases to 10%, meaning they cut benefits that would have amounted to an additional 3% to 4% of total health costs. “[Companies] told us in 2004 they would continue to cut benefits,” Bos notes.

Individual in-network deductibles of $1,000 or higher are required in 34% of Preferred Provider Organizations (PPOs) compared to 20% in 2002, according to Mercer. “We are seeing the deductibles creep up faster than we have seen them historically,” says Bos. “For five years they did not change much at all. We saw a big jump for small employers in 2002 and a moderate jump in 2003 for larger employers. We expect that trend to continue.”

Many employers are considering so-called consumer-directed health plans, which give employees more control over the design of their health-care packages, similar to the way employers have shifted pension benefits from defined-benefit plans to defined-contribution plans.

More than a third of respondents to the Mercer survey say they are planning to introduce consumer-oriented measures to hold down rising health care costs. Only 1% have introduced a formal consumer-directed health plan, although among larger companies, with 20,000 workers or more, 9% offer a consumer-directed plan, up from 7% in 2002. “At this point enrollment is not significant from a statistical standpoint, but we definitely believe that growth in this area will be geometric,” says Bos.

According to Watson Wyatt, 2% of companies are “strongly confident” that consumer-driven plans will reduce costs and 12% are “highly confident.” Those figures were down from 2003 when they were 3% and 14% respectively. “A lot of people think that if we could get people to have more skin in the game, that this will slow spending growth,” says Pauly, adding that, at this point, the movement is very small and driven largely by consultants.

Helen Darling, president of the National Business Group on Health, a national industry lobby, says companies are enthusiastic about the potential of consumer-directed plans. “If you see it as the solution to everything, it’s going to disappoint,” says Darling. “But if you see it as one of the ways to get consumers more engaged and more informed about what things cost, it will slow down some of the demand.”

Darling says that along with consumer-driven plans, employers need better information about what the most effective medical treatments are so employees can make better decisions. She proposes this work could be done through a national organization such as the National Academy of Science. Employees also need better networks to determine which doctors and hospitals are best.

“We think that having cost sharing is really important – that people have to pay some of the money,” says Darling. “We also think that performance data on doctors and hospitals would allow people to make choices about which hospitals and doctors are the best and the most efficient and which have the highest quality and safest care.”

Incentives for the Healthy?

Randall Abbott, senior health care consultant at Watson Wyatt Worldwide, says his firm expects 12-13% annual increases in corporate health spending over the next three to five years. “We see no silver bullet on the horizon.”

Yet some employers, Abbott adds, have been able to bring their cost increases down to around 7% using a variety of strategies. These employers have initiated communications programs that set up a dialog with employees about health care costs and they are emphasizing wellness programs. However, employers are not going so far as to mandate programs. Abbott points out that federal regulations prohibit companies from punishing employees for health or lifestyle choices, but does allow incentives.

In some companies, he says, tension is building between employees who follow a healthy lifestyle and those who do not. “If you think about the origins of health insurance, it’s the idea of ‘All for one and one for all.’ Yet one of the phenomena with baby boomers has been ‘Me First.’ What we’re seeing is the viewpoint: ‘I’m not sure I want all for one and one for all. If I’m healthier, I deserve a better plan. I deserve some kind of incentive.’ That is very different from the traditional perspective of group insurance.”

Abbot says employers seem to be taking two different paths to coping with employee medical spending. Some will continue to work within the general framework of their existing plans to make them more efficient by continuing to shift the financial burden to employees and by encouraging greater awareness of health care costs.

“The other side is the employer who says, ‘I’m not confident I want to keep what I’ve got.’” These employers, says Abbott, will shift their plans toward employee-driven accounts that provide for catastrophic coverage but give employees more control over their own medical spending through accounts similar to 401(k) defined contribution pensions. “Those employers are saying, ‘I want to change the status quo,’” says Abbott. “I want to change the game and create more of an individual engagement among employees.”