In Part II of this Knowledge at Wharton interview Martin Reeves, senior partner and managing director of the BCG Henderson Institute for strategy and author of the recently released book, Your Strategy Needs a Strategy, discusses how leaders can connect strategy to execution. He also looks at how large companies need to devise a variety of strategies for different parts of their business.

You spoke in our previous discussion about strategy. Why is it critical to link strategy to execution?

How can leaders follow the ideas in the book?

We deal with leadership in the book. Why would we cover leadership in a book on strategy? It’s because we’re interested in winning outcomes — the whole point of strategy — and that requires the execution and the orchestration of these approaches in the ambidextrous organization.

The problem is that the classical model of leadership — cascading instructions based on experience and judgment down a hierarchical organization, and then managing execution against those instructions — works perfectly fine in a classical environment. But it won’t work in, say, an adaptive environment that is much more unpredictable and where it’s simply not possible for the leader to have a stable instruction set.

So the question becomes: How does a leader animate multiple approaches across one organization? In the book we deal with eight facets of leadership that need to be considered in the new environment. Let me just touch on a few of them.

We also talk about the need for inquisition, for questioning. That is critical where we can’t have a stable instruction set. In that case, leaders need to be really good at getting to the bottom of things by asking the right questions. All of this essentially defines the skill set of the ambidextrous leader.

How does a leader animate multiple approaches across one organization? In the book we deal with eight facets of leadership that need to be considered in the new environment.

How does strategy connect to execution?

The title of the book is Your Strategy Need a Strategy and it mentions the word “strategy” twice.  But in fact the book is not simply about strategy, it’s about effective approaches to strategy. And just as we have said that strategy is not one thing, we think that implementation is also not one thing.

Now let’s think about a software company that’s implementing an adaptive strategy. There the equation is turned upside down and inside out because it starts with experiments by empowered employees on the company’s front lines. Some of those new things work and are picked up, communicated and amplified. And what is the strategy? It is the continuous stream of improved ideas that result from those actions. So in this particular case strategizing cannot be separated from action. Actually, the action — the experiment — comes before the strategy. The strategy is a result of the implementation.

If we went through each of the styles of strategy, you’d find that this relationship between strategy and implementation, and the nature of implementation, varies in each case.

The analysis in the book shows quite clearly that the durability and the value of leadership positions is increasingly tenuous.

How does the game created for the book work?

In the process of writing the book, we had a little strategic problem of our own — in fact, two problems. One of them was that our research showed that CEOs would probably be interested in what we had to say, but they may not read the whole book. We needed a more concise form of communication.

The solution to these problems was really twofold. First, we wrote a very compact, introductory chapter to the book that could be read in its own right. Second, we built a game for the iPad, where we led with experience.

The game is quite fun. We take the five boroughs of New York City.  Why New York City? Because it has five boroughs—and that’s the number of approaches to strategy! And the idea is to win against a fictional opponent  “Bruce”(named after our founder, and a great strategist, Bruce Henderson) in running a lemonade stand in each of these environments.

The tricky part is that Bruce is a very fierce competitor and each environment requires you to not only identify, but more importantly, to implement, a very different approach to strategy. So by experiencing these different environments, you develop a muscle memory for what an adaptive strategy or a visionary strategy feels like. And that allows you to essentially back into the content. You can ask what happened in that game, you can read a little bit about the particular approach to strategy that was required in that environment, and you can even click through and buy the book if you’re interested.

What does this mean for large companies?

Many of the approaches that we detail in the book are challenging, but not so challenging if you’re doing them fresh, as a start up. If you’re an e-commerce company and you’re putting in place a digital marketplace, that may be hard in its own right. But you don’t have to forget your own history to do it.

Large corporations have an additional challenge: They have to move away from a previously successful recipe and adopt a new and unknown one. And they have to pick the right timing and the right rate of progression in doing so, both of which are tough to do. So you might call it “rejuvenating the corporation.”

I think the first success factor in this rejuvenation is to really understand that need. The analysis in the book shows quite clearly that the durability and the value of leadership positions is increasingly tenuous. So there really is a need for large corporations to look ahead at new ways of doing strategy.

And the second success factor boils down to having the right capabilities. One of them is adaptiveness or experimentation. The second is the capability of shaping, which is not just participating in environments, but actually shaping ecosystems. And the third is ambidexterity, which is comfort with diversity, comfort with a mosaic of approaches, rather than a single monolithic approach.

We recently saw the announcement that Google was dividing itself into pieces under a new holding called “Alphabet”. This is a great example, actually, of structural ambidexterity. All of this has to be managed not only as change in the organization, but also as a change in people’s minds. It requires familiarity with new ways of thinking that we detail in the book.

Your Strategy Needs A Strategy on bcg.perspectives

Does Your Strategy Need a Strategy? Part II 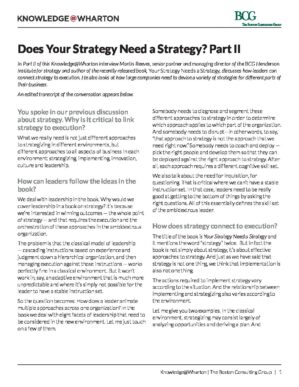