Business environments have become so diverse that companies today need different approaches to strategy in different circumstances, says Martin Reeves, senior partner and managing director of BCG’s Bruce Henderson Institute and author of the recently released book, Your Strategy Needs a Strategy. Large companies in particular should deploy separate strategies for different parts of business, and when they do so, research shows they perform better. In Part I of this Knowledge at Wharton interview, Reeves looks at the most common approaches to strategies and the biggest traps companies fall into when trying to formulate and implement them. Part II will cover connecting strategy to execution, the kind of leadership needed to implement different approaches to strategy and how large companies can deploy the right strategic approaches.

What is Your Strategy Needs a Strategy based upon?

Your Strategy Needs a Strategy is based on 10 years of research on strategy in the BCG Bruce Henderson Institute. We did a detailed survey of 150 multinationals, on their perceptions of their environments, their elected approaches to strategy and their actual strategizing behaviors.

We also analyzed performance data for all U.S. public companies since 1950. We did in-depth case studies and interviews with CEOs, which you see featured in the book. Finally, we validated our conclusions by constructing what we call our “universal strategy simulator,” which is a simulation of what strategies work in what environments. That’s the evidence on which the book is based on.

What are the headline conclusions?

I’d say there are three main headline conclusions from the book.

Firstly, business environments are now so diverse that we need different approaches to strategy in different circumstances. And more particularly, the classical style of strategy – analyzing, planning and executing – is still perfectly fine for some situations, but it’s no longer a panacea.

Secondly, especially large companies need to deploy multiple approaches to strategy in different parts of their business. We call this ambidexterity.

Thirdly, we need to modify our concept of leadership. Leaders need able to lead, direct and design the mosaic of strategies that are required by large companies.
All of these things result in a demonstrable performance benefit for corporations.

The classical style of strategy – analyzing, planning and executing – is still perfectly fine for some situations, but it’s no longer a panacea.

What are the most common strategies?

The most well known approach to strategy and implementation is what we call the classical approach. This is the one that most of us probably learned about in business school.
Its key components are analyzing and planning, implementing in a disciplined manner and finally following the plan. This is an approach which works well in predictable environments that are not shapeable.  In these industries, demand grows roughly at GDP levels, and volatility is relatively low.

The second approach to strategy is what we call the adaptive approach. This approach works really well in highly unpredictable industries that are also not easily shapeable. A good example could be the software industry, in particular, say, the gaming industry. Here, the competitive conditions are highly volatile and the technology is constantly changing. As this environment doesn’t allow us to plan, we use a more biological approach. Essentially, we create variation, we select what works, we implement that and scale it. Then, the cycle begins again. One could say that this adaptive strategy emerges continuously from experiments.

The third approach to strategy is what we call the visionary approach. Here, conditions — at least in the eyes of the entrepreneur — are both predictable and shapeable. So this is not about participating in an industry, but creating an industry. The approach here is to envision a possibility that others have not seen, then to realize it and finally to scale it.

We’ve all known entrepreneurs that have followed the visionary approach. In our book, we give the example of 23andme, which is a new genomics testing services company with a novel business concept. Large corporations are increasingly vulnerable to upstart challenger companies. In order to defend themselves, large corporations need to master the visionary style, which was probably present at their inception decades ago.

Large corporations are increasingly vulnerable to upstart challenger companies. In order to defend themselves, large corporations need to master the visionary style, which was probably present at their inception decades ago.

The fourth approach to strategy is probably the most exotic and unfamiliar one. It is what we call the “shaping approach.” Here, conditions are both shapeable and unpredictable.  That sounds almost like a contradiction, but it isn’t: This environment it not based on single companies competing against each other, but a whole ecosystem of companies that are collaboratively reshaping an industry. Good examples of this are two-sided market places like Alibaba, or ecosystem-based companies like Red Hat or Amazon.

These companies have not only deployed a strategy at the level of an individual company, but they’ve created a successful position within a successful ecosystem. Here, the recipe for thinking about strategy is very different: to orchestrate the contributions of others in the ecosystem and then to co-evolve that collaborative system.

The fifth approach to strategy is what we call “renewal.” It applies to situations where companies have gotten out of step with their competitive environment. As a result, their competitive or financial performance is suffering. Renewal is usually a very big bet for companies. Seventy-five percent of renewal projects fail. The difference between failure and success in NPV (net present value) terms is roughly the enterprise value of the company.

One should think about a renewal strategy in three steps. Firstly, it’s important to anticipate the need for renewal early. The sooner you start the renewal exercise, the more successful you’re likely to be. Secondly, it’s important to think about economizing. It’s necessary to free up resources, but not only for the purposes of financial viability, but also to fund the journey back to growth. The third critical stage is growth and innovation. The company cannot cut its way to success, it needs to fund the journey back to growth and innovation. There are many examples of successful renewal approaches:  Amex, for example, did this very well during the recent financial crisis and pivoted very quickly back to growth and innovation.

What is the biggest mistake companies make with strategy?

We deal with tricks and traps in the book. We looked closely at how companies perceived their environments and the strategies that they choose. We found that there is a very human bias towards perceiving business environments as more predictable and more controllable than they actually are. It’s very comforting to believe that one can control and predict the surroundings.

The second big trap is to be stuck in one way of doing strategy. Most often, it’s the classical approach: analyze, plan, execute. Again, that’s not a bad approach under the right circumstances. However, if you are in a very fast-moving part of your business, then it’s totally inappropriate.

In particular, there are a couple of capabilities that large corporations need to have in order to succeed. One of them is the adaptive capability, the ability to undertake disciplined experimentation. Another one is the shaping capability, the ability not just to participate in their environments, but actually to shape them to their advantage. And the third one is the capability of ambidexterity, which is the ability to run different approaches to strategy in different parts of the organization.

So let me just expand on some of those capabilities. A company building an adaptive capability needs to create a process for experimentation. That includes metrics for measuring the effectiveness, speed and the return on investment from their experimentation efforts. In addition, managers need to empower their employees to take risks and to experiment.

We found that there is a very human bias towards perceiving business environments as more predictable and more controllable than they actually are.

The third key capability for large companies is ambidexterity, which means to run different types of strategy in different parts of the company. Take the digital industry in China, for example. As a very fast-growing environment, successful companies will either employ a shaping or an adaptive approach. In any case, it will be a very dynamic approach to strategy. The printing industry, for example, is more stable and slow-growing. Hence, it will typically be more classical in nature.

So how do you achieve ambidexterity? The book outlines four ways. The most common way is by separation, for example separate business units that are allowed to have different cultures, different metrics, different goals and different performance contracts.

The second way is switching. When products progress very rapidly in their lifecycle, it may not be expedient to actually separate the exploratory from the exploitative. Therefore, we need what we call a switching strategy: The same group of people need to modify and modulate their behaviors over time.

A third way of achieving ambidexterity is to employ an internal ecosystem. For example, take, Haier, the Chinese white goods manufacturer. Haier essentially created an ecosystem of hundreds of small business units that all negotiate with each other to create a very flexible enterprise system.

The last example of an ambidextrous strategy is to create an external ecosystem. How could Apple, a company that had never made a smart phone before, defeat a 60% market share leader, Nokia, in a highly technology-intensive, high-fixed cost, global regulated complex industry? Well, the answer is they didn’t. Their multi-hundred company collaborative ecosystem beat Nokia. This shows the diversity that they employed. The approaches to strategy and implementation, if you like, were ‘outsourced’ to an ecosystem.

Your Strategy Needs A Strategy on bcg.perspectives

Does Your Strategy Need a Strategy? Part I 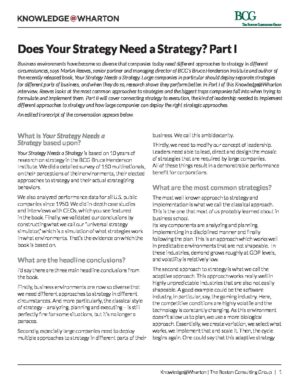