In his recent article about four different futures for the evolution of the COVID-19 virus, Wharton’s Eric K. Clemons, a professor of operations, information and decisions, noted that the markets have been reacting to uncertainty rather than to expectations. Continuing his analysis in this companion piece, he examines four more potential scenarios examining the very short term social and economic dimensions of the crisis. Clemons’s bottom-line assessment: It is premature to assume that we will manage our way through the next several months successfully. It will be painful, and the key questions involve how we will respond to the pain. Different responses will have different impacts on the levels of pain we must endure. This model allows us to predict the impact of the policy decisions we observe.

It’s customary when doing a scenario analysis to assume a long-time horizon, maybe five, 10, or even 25 years. When I did the first part of my analysis of COVID-19, I assumed that both the lethality of the virus in five to 10 years and its mutation rate over the same period were unknowable today. That results in four different scenarios, ranging from benign to catastrophic. The most benign scenario, low lethality and low mutation rate, would be a minor inconvenience for which a vaccine would be available. The most catastrophic scenario would be a virus that was highly lethal and that mutated frequently, meaning it would have many fatalities among infected individuals and no vaccine would be available.

Scenario analysis is not a classification system, where you divide a population into segments — high aptitude and low aptitude and high energy and low energy — to get four groups. It’s not even a system for dividing the future into high and low probability outcomes. It’s a system that looks at the most critical things we don’t yet know, the key uncertainties that we really need to be able to evaluate. These are the things that if we could know them, we could predict the future. They help us divide the future into sets of alternative outcomes. We then assume that each of these critical things takes on one of its two most extreme values. That gives us four different futures, defined as Low1 & Low2, Low1 & High2, High1 & Low2, and High1 & High2. When we select our two key uncertainties, we get four very different futures. We sequentially assume that each of the combinations is true, and we sequentially analyze each of them.

When we pick our uncertainties correctly each of the futures is possible, they are all different from the others, and they all require different sets of strategic responses.

The virus was no one’s fault. But our responses, and the economic, political, and personal costs are at least partly within our control.

Uncertainties in Our Current Scenario

We sort of know where we are now. We are confronting a new virus. It seems to spread faster than the flu, because we have no immunity from previous infections with this virus. Likewise, we have no vaccines to slow the virus’s transmission from person to person. We have no effective anti-viral medications to treat this virus, so it can be extremely lethal, at least in the most vulnerable populations. In the absence of vaccines and medications, the most promising way to limit the damage is to slow the spread of the virus, mostly through voluntary social distancing. This can be combined when necessary with mandatory closings of businesses, bars and restaurants, theaters and sporting events, schools, and indeed almost all places where people congregate and can expose one another to the virus. In the absence of complete testing to identify carriers, and in the absence of complete self-isolation of carriers and suspect carriers, social distancing and shutting down vast segments of the economy may be the only way to slow the spread.

Why is it so important to slow the spread, or flatten the curve of growth in infection? There are two reasons. In the most pessimistic scenario, we are all going to get the virus, but we do not all have to get sick at the same time. If we can spread out the times when people get sick, we will not overload the hospital system, and there will be an adequate supply of hospital beds, intensive care doctors, and ventilators with trained operators. We will get sick, but far fewer of us will die. If we can flatten the curve even further, we may not all have to get sick. We may slow the transmission long enough to have vaccines available before most of the population is exposed.

What will the effects be when we shut down entire segments of the economy? We’ve had recessions that emerged over months or years. We’ve never had a self-imposed, instant and long-lasting recession before.

Here are the two questions that, if we could answer them, they would enable us to predict how deep and how long the recession would be. They also would allow us to predict how catastrophic the impacts of COVID-19 would be on the health of our populations.

Can We Flatten the Curve?

President Trump tried to rally America behind him in the War Against an Invisible Enemy and he may have succeeded in uniting the country in shared sacrifice. But for how long? And under what circumstances do we remain united? And under what circumstances does social cohesion begin to fall apart? Again, there is so much we cannot predict because we have not experienced this before. 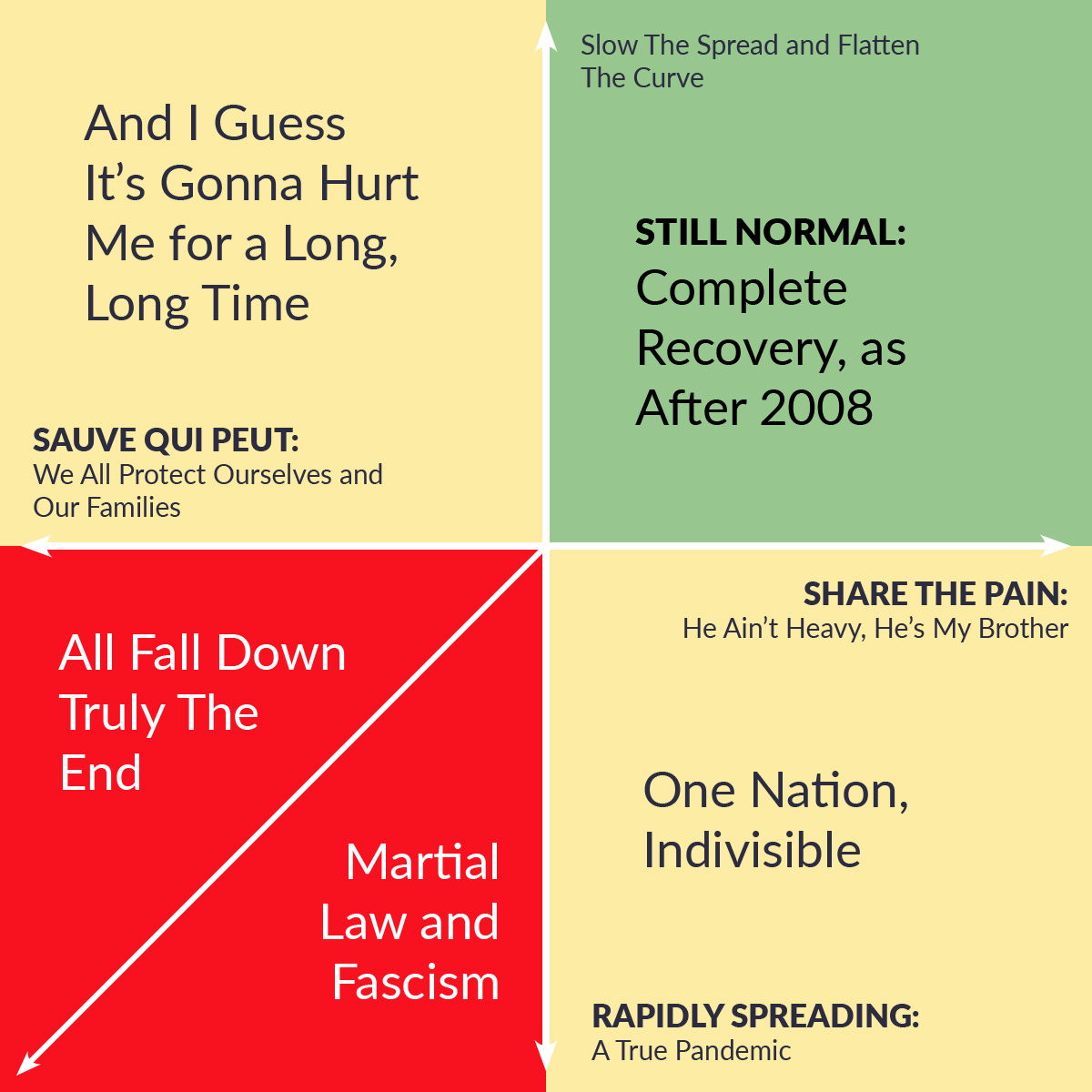 Still, the cautionary scenarios are often not only dangerous but dangerously unstable. Would we truly share the pain equally? Would we truly remain one nation, indivisible, if the suffering lasted for years? During World War II, U.S. military leaders believed that the population would not have been willing to continue the war against Japan if the Japanese had been able to resist for much longer. We are a more ethnically and economically diverse nation today, and political divisions are worse than they have been at any time since the Civil War. Would rural America, with ample local food supplies, continue to support rationing? Would the urban poor, often well-armed, continue to suffer as their wealthier neighbors appeared to continue to live the lives they had enjoyed before?

I see two halves of an unacceptable alternative shown in dangerous red.

In my first piece I sketched out why it was premature to assume that COVID-19 would be a plague of biblical proportions, a biological catastrophe for decades to come. In this piece, I argue that it is also premature to assume that we are going to manage our way through the next several months successfully. It will be painful, and the key questions involve how we respond to the pain. Observing governments’ policies and societies’ responses will allow us to determine which of these scenarios will emerge.  The virus was no one’s fault.  But our responses, and the economic, political, and personal costs are at least partly within our control.

Stay safe. Be good to one another. Good luck. And may “God bless us, every one.”