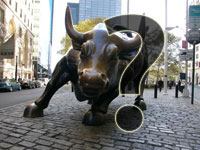 Tuesday’s report from the Conference Board indicating a spike in consumer confidence — now at its highest level in five years — should boost optimism about growth in the second half of this year. Add to this a big rise in home sales and a stock market surging to record highs, and the outlook for the U.S. economy is bright. After all, numbers like these typically mean that consumers will spend more, companies will hire more, and stock prices and housing prices will keep increasing.

Yet the latest data also raise some questions. For example: Do the numbers suggest that we are, in fact, on economically firm footing? What segment of the economy is benefitting most from these increases? (Consumer confidence slipped among people earning between $25,000 and $35,000.) In terms of housing prices, are the numbers increasing too fast? Could we be entering another bubble fueled by speculators and house flippers?

Kent Smetters, Wharton professor of business economics and public policy, keys in on the housing market. “The high loan-to-value type of mortgage lending prominent before the 2008 housing bubble burst appears to be back,” he says. “Looser lending standards combined with the artificially low long-term interest rates do seem to be a recipe for another bubble. Of course, investors will be smarter on the securitization side, doing more due diligence on the loan quality of the underlying pools. Still, the high LTVs [loan-to-value] and low interest rates give a reason for some pause.”

Smetters also points to a “big pre-college education crisis in the United States…. If the dropout rates and poor performance common in the inner city community occurred in the suburban areas, the nation would recognize pre-college education as a major crisis. Helping the poor gain confidence is ultimately about [figuring out] how to help them gain skills and better education.” He cites the University of Pennsylvania’s involvement with the KIPP program — a national network of free, open-enrollment schools designed to help students in underserved communities prepare for college –as one good way to approach this issue.

As for strong showings by both the Dow Jones industrial average and the Standard & Poor’s 500 index, “I think that the market has its head in the sand regarding the public policy side of things,” Smetters says. “We are still on the path of exploding deficits, and it will require major spending and tax reforms to address them.”

Wharton marketing professor Stephen J. Hoch looks at the news from the consumer perspective by, for example, dividing the population into the haves and the have-nots. “The have-nots are sitting in the same sink hole as they have been forever, but now they have to watch the haves start behaving like they did during the heady days of 2006 and early 2007,” he says. “It could turn into a case of dreamy consumer amnesia: Housing is back; time for splurging to make up for all that ‘sacrifice.’ The very rich have been in this place for at least a couple of years.”

Every time there is “a dip and recovery, I am amazed at how fast things come back once some momentum is gained, despite the severity of the previous recession,” he adds. “The haves are right now suffering from a conflict between fear and greed because they remember not only how much they lost the last time, but they see how much they have gained in the meantime.”

He predicts that most consumers will maintain “a discount mentality, but extra splurges are now getting added into their mix of purchases. My view is that the consumer — the haves — will continue to increase spending and help keep the modest recovery going.”