UCLA professor Adam Winkler discusses his recent book on the 200-year history of corporate influence on the law. 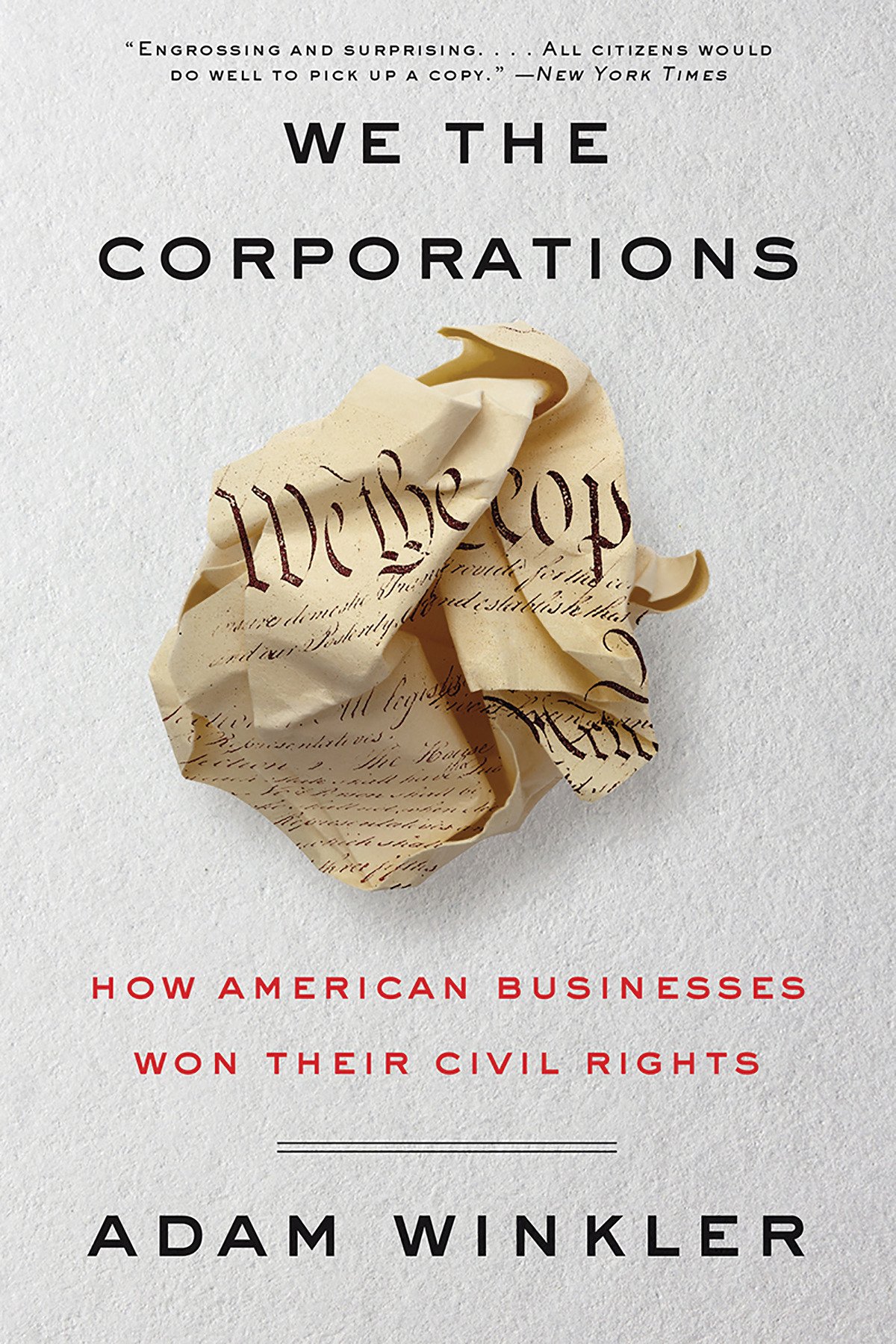 American citizens think of the U.S. Constitution as a living document that guarantees civil rights, but many don’t realize the strong influence corporations have had in shaping the highest laws of the land. In his new book, We the Corporations: How American Businesses Won Their Civil Rights, UCLA law professor Adam Winkler explores the 200-year history of how businesses have molded jurisprudence. He joined the Knowledge at Wharton show, which airs on SiriusXM channel 111, for a look into the co-opting of political power.

Knowledge at Wharton: Should corporations have the same rights as American citizens?

Adam Winkler: This has become a big controversy since the Citizens United case in 2010 held that corporations have the same free speech right as people to spend money on elections. The Supreme Court has handled a number of big, high-profile cases dealing with the constitutional rights of corporations.

I think when we look back at the history, what we find is that, yes, corporations should have many of the same rights as individuals. They need, for instance, protections for their property rights. They need due process protections against being charged with criminal offenses without a good basis in law. At the same time, they probably don’t need all the same rights as individuals. What’s so controversial in recent years is that the Supreme Court has extended things like political speech to corporations and even religious liberty to big companies like Hobby Lobby.

Knowledge at Wharton: These protections have been sought by many corporations, correct?

Winkler: Yes. In terms of pursuing constitutional rights — something that corporations do so that they can fight back against certain kinds of unwanted regulation — that battle has been going on for a long, long time. Like women and minorities who were also left out of the original promise of “we the people,” corporations have been fighting for 200 years to gain equal rights under the Constitution. They don’t do it by marching in the street. They don’t risk their lives the way civil rights protesters did. But they have fought a very determined effort in the Supreme Court to win landmark rulings, extending our most fundamental protections to them.

“In many ways, corporations have often won rights that minorities and women were denied.”

Knowledge at Wharton: Take us back to some of the early instances of corporations fighting for their civil rights.

Whereas women and minorities lost many of their early cases, corporations won that first case back in 1809 and have put together a pretty remarkable string of victories ever since. They’ve used the Constitution to fight back against any number of laws. Back in 1809, it was fighting against a tax imposed on the Bank of the United States by the state of Georgia. In the 1880s, it was Southern Pacific Railroad fighting against special tax rules on them. In the 1930s, it was newspaper companies fighting against censorship. There has just been a long history of corporations seeking constitutional protection.

Knowledge at Wharton: Is it surprising to you that businesses have had advantages for years while citizens did not?

Knowledge at Wharton: You bring up the notion of corporate personhood, which was key in the early successes that businesses had in securing these rights from the court. Can you talk about that?

Winkler: Every corporate lawyer and business person understands the idea that corporate personhood is a very old, established legal principle. It merely says that a corporation is its own independent entity in the eyes of the law, with its own legal rights and its own legal obligations, wholly separate from the rights and obligations of the people who formed the corporation.

That’s why we have limited liability and why shareholders can’t be held personally responsible for the debts of the corporation, because the shareholders and the corporation are separate legal persons. What’s become so controversial is that the Supreme Court has used that idea in some instances to expand the rights of corporations under the Constitution. Some have said that this enables corporations to exercise many of the rights of citizens without having all of the same responsibilities of citizens.

Knowledge at Wharton: When we think about American history, we think about the Pilgrims setting the stage for what we know as our United States today. But you give just as much credence to the corporations.

“Long before colonists came here seeking political and personal and religious freedom, corporations were on this shore seeking profit.”

Winkler: We tend to think of the Pilgrims as the embodiment of American ideals. They were at the heart of our origin story — their landing at Plymouth Rock, trying to exercise political freedom and fight against tyranny. But America was really founded by the English in Jamestown, 15 years before Plymouth Rock. It was a corporate affair run by one of England’s first joint stock corporations, the Virginia Company of London. It was a business venture designed to make money.

Long before colonists came here seeking political and personal and religious freedom, corporations were on this shore seeking profit. If we want to understand some of the key introductions of democracy into America, like the first representative assembly and things like that, they were done not out of some liberal belief that we need to have a more progressive society. They were done as business ventures to encourage people to move to America. They were done for reasons of profit, not politics.

Knowledge at Wharton: We don’t have much of an understanding about how corporations shaped our society.

Winkler: I don’t think so. Part of the reason why I wrote this book was because there were so many fascinating stories about our Constitution that involved corporations that rarely get told. We tend to focus on the Civil Rights Movement or the women’s rights movement or gay rights or free speech without recognizing the important role that corporations have played as innovators in constitutional law.

Knowledge at Wharton: You point out that court wins by these companies have also charted a legal path for organizations like the NAACP or gay rights groups.

Winkler: In recent years we’ve seen organizations, especially in the gay rights community, put together all-star dream teams of lawyers like Ted Olson and David Boies to fight the ban on same-sex marriage in California. The Southern Pacific Railroad did that over 130 years ago in fighting for expansive rights under the 14th Amendment for corporations, hiring an all-star team of the best lawyers in the country to make very innovative, novel claims.

Southern Pacific Railroad, like the NAACP years later, filed a series of test cases seeking constitutional protections. Some of the earliest and most important cases breathing life into the constitutional principles of equal protection and due process and freedom of the press were all invigorated and established in cases involving businesses.

Knowledge at Wharton: What has been the role of individual Supreme Court justices in this?

“Corporations were innovators, breathing life into some of our basic constitutional provisions.”

Winkler: One of the fun things that I found in writing the book is that it was also a story of really fascinating lawyers and justices who reshaped the law. There were great lawyers like Daniel Webster, one of the great advocates who argued many early corporate rights cases in the Supreme Court. And there were justices that were very surprising. Roger Taney was a reviled figure in the history of the court for his Dred Scott opinion, but he was also a corporate reformer who wanted to limit the rights of corporations.

Knowledge at Wharton: Did corporations have an effect on the Revolution?

Winkler: The Revolution was in part inspired by anger about big corporations. Think of the famous Boston Tea Party. We think of that as a protest against the British government, but the colonists were also protesting against the most powerful corporation in the world at the time — the East India Co. that was responsible for importing tea into the colonies. The colonists were very upset that the British government had passed a huge bailout of the company. The reason why they went that day and threw that tea overboard is because it was the tea of the East India Co., and they wanted to protest how the company had gotten this special bailout.

Corporations did help inspire the Revolution, and in many ways corporations shaped the Constitution. The framers didn’t think about corporations when they were writing the Constitution, but the written document that they proposed to the states was influenced very heavily by the early corporate charters of the original American colonies that were set up as business corporations.

Knowledge at Wharton: Should the Constitution stay intact for decades to come, or is it something that needs to change as we change?

Winkler: There are certainly questions about what kind of constitutional reform we could use in America. The Constitution doesn’t work perfectly, to be sure. But it has remained largely the same. We’ve had some major amendments that have shifted some of its values and priorities. But one of the geniuses of the Constitution is that even if it wasn’t written to protect, for instance, women and minorities in the same way it was written to protect white people, women and minorities have managed to use that Constitution to win equal citizenship and to win those important rights that others have.

That’s the story we celebrate. But there’s also a story of corporations seeking those protections, and one could make the argument that’s part of the reason why we’ve had the success that we’ve had as a capitalist country. It’s due in part to the success of corporations winning constitutional rights.

Knowledge at Wharton: You talk in the book about consumer advocate Ralph Nader, who has been influential in court cases over the last few decades. Take us into the work that he has done and how it has created a framework for some of these decisions on corporate rights.

Winkler: One of the ironies I find is that often progressive reformers who tried to limit corporate power have actually promoted reforms that ended up helping big corporations. Ralph Nader is a perfect example.

In the 1970s, Ralph Nader was representing people who were consumers of drug prices. They had prescriptions for drugs, and they couldn’t comparison shop to find the cheapest version of that drug because laws restricted the ability of pharmacies to advertise drug prices. Nader takes a case to the Supreme Court on behalf of these consumers, saying these consumers should have access to this information and this law is unconstitutional. The Supreme Court agrees and adopts a theory of the First Amendment that says speech, if it’s valuable to the listeners, is protected regardless of the identity of the speaker. That is the same principle that the court would invoke, for instance, in Citizens United. They say that the political speech funded by corporations is valuable to the listeners, so it doesn’t matter that it was funded by a corporation. It’s still protected by the First Amendment.

Knowledge at Wharton: Who are the modern-day Ralph Naders?

Winkler: We probably don’t necessarily see those people as leaders in setting the groundwork for corporations, but it’s perhaps because we just haven’t looked closely enough. Earlier we mentioned that corporations are great innovators in constitutional law, often first-movers in civil rights litigation and in invigorating particular constitutional rights. But corporations are also great leveragers. They’re also able to use progressive reforms to pursue the ends of capital and of business. The story of corporate rights is really a story of corporations taking advantage of liberal reforms, like Ralph Nader’s listeners’ rights theory of the First Amendment, to promote the ends of business.