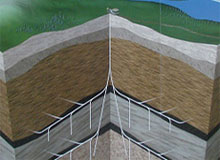 A new land rush is hitting China. This time, it's not about investments in high-priced urban real estate, but about underground energy resources in provinces such as Guizhou and Anhui. About 70 Chinese companies — from large, state-owned energy companies to private sector firms — are lining up to bid in China's second auction of shale gas exploration rights, expected to take place this summer, according to the China Daily. "The activity is feverish," says Ming Sung, Shanghai-based chief representative of the Clean Air Task Force (CATF), a Boston nonprofit working with the Chinese government and companies to introduce environmentally responsible shale gas mining practices.

According to the U.S. Energy Information Administration, China leads the world in technically recoverable shale gas — natural gas trapped underground in shale formations that only recently became exploitable due to U.S.-led advances in horizontal drilling and hydraulic fracturing (otherwise known as fracking) of rock to release gas previously too difficult to recover. In an April 2011 study, the EIA estimated that China has 1,275 trillion cubic feet (tcf) of shale gas reserves, versus the runner-up — the U.S. with 862 tcf. Other leading countries include Argentina, South Africa, Mexico, Australia and Canada.

Over the last decade, China and other countries have witnessed the meteoric rise of the shale gas industry in the U.S. The U.S. holds the keys to technological innovations in drilling and fracking; it is also the world's leader in the sector, with production rising from nearly zero in 2000 to 10 billion cubic feet a day in 2010, according to the James A. Baker III Institute for Public Policy at Rice University in Houston, Texas.

China would like to catch up to that. Highly dependent on energy imports to power its economy, the country is eager to find a plentiful new fuel source at home. "For China, energy security is paramount," says Wharton management professor Marshall W. Meyer. "Anything they can do to develop supplies they can control, they will do." In its 12th Five-Year Plan (2011-2015), China's goal is to produce 6.5 billion cubic meters of shale gas by 2015 and as much as 100 bcm by 2020, or about 6% of total primary energy.

The fuel also could help move China, the world's biggest carbon emitter, toward cleaner energy. Shale gasproduces about one-third the carbon dioxide of coal, which supplies 70% of China's energy needs today, notes Noam Lior, a professor of mechanical engineering and applied mechanics at the University of Pennsylvania.Also, "making gasoline or liquid fuels from coal is costly and energy consuming," he says. "But gas [which can be converted to liquid more readily] can be used for heating, power generation and industrial processes." Moreover, "if done properly, shale gas could reduce carbon dioxide as a transition away from coal, hopefully to something better, like renewable energy," adds Sung. The trick is to adopt responsible fracking practices that reduce the leakage of methane, which is more than 20 times more harmful that carbon dioxide, he says.

'The Overnight Success That Took 20 Years'

But for all its below-ground shale gas assets, China is starting far behind the U.S. in the areas of technology and infrastructure, and is also untangling a host of business and policy issues to spur shale gas development. "There are a lot of ingredients to success in North America that cannot be duplicated very quickly anywhere in the world, including China," notes Edward Chow, a former Chevron executive and now senior fellow at the Center for Strategic and International Studies in Washington, D.C. Even in the U.S., "shale gas was the overnight success that took 20 years," says Julio Friedmann, chief energy technologist at Lawrence Livermore National Laboratory in California. Spurred largely by entrepreneurial firms, such as Houston-based Mitchell Energy & Development Corporation, rather than big international oil companies, fracking took off only in the last decade when oil prices started to mount.

Even below ground, China faces big uncertainties. Unlike the U.S., where oil and gas formations have been extensively drilled and studied, no one really knows much about China's reserves. According to the EIA, China's best regions are Sichuan province and the Tarim Basin in Xinjiang province. Five other regions, including the Ordos Basin in Xinjiang and other northern areas, have less promising shale formations, according to the EIA. Chinese shale tends to be much deeper and in more fault-ridden terrain than U.S. deposits — making drilling more expensive and challenging but not insurmountable, notes Bruce Hill, CATF's senior geologist.

In addition, China's water deficit is a concern. China supports 20% of the world's population with only 6.5% of its water resources. But "when you drill a shale gas well, you have to shoot it with 10 to 12 million gallons of water [along] with sands and chemicals to keep the [shale] pores open," says David Fridley, staff scientist at the Lawrence Berkeley National Laboratory in California. "Drilling one or 10 wells can be technically demonstrated in China, but the idea of drilling thousands is another matter." While scientists are exploring water-saving fracking techniques, including the use of brackish water that might be found deep underground on-site, these techniques are not widely used yet, notes Hill.

Meanwhile, above ground, China is still working on developing the business relationships, industry structure and regulatory framework needed to develop a thriving industry. A top priority is learning sophisticated drilling and fracking know-how from U.S. companies. For now, relationships between Chinese and foreign companies are evolving, with each still holding tight to their crown jewels, say experts.

Though international oil giants, such as Royal Dutch Shell, Chevron, BP, and others are partnered in preliminary ventures with Chinese companies, the Chinese government is reluctant to grant too many shale gas development rights to foreign firms, notes Kevin Tu, senior associate for Energy and Climate at the Carnegie Endowment for International Peace in Washington, D.C. "But If China is serious about shale gas development, sooner or later it needs to open this sector to international companies, especially U.S. developers," he says.The first auction of exploration rights in June 2011 was open only to Chinese state-owned enterprises. The upcoming auction is open to both domestic state-owned enterprises and private-sector companies. Foreign companies now participate by partnering with domestic bid winners.

Meanwhile, in the U.S., shale gas leaders, such as Devon Energy and Chesapeake Energy, have been reluctant to impart their technology know-how to the firms' Chinese investors, Sinopec and the China National Offshore Oil Corporation (CNOOC), respectively, notes Bo Kong, assistant research professor at the Johns Hopkins University School for Advanced International Studies (SAIS) in Washington, D.C. The Chinese and U.S. companies designed deals giving the Chinese passive, minority stakes to avoid disapproval by the Committee on Foreign Investment in the U.S. (CFIUS), which axed CNOOC's 2005 bid for Unocal. Also, the Sinopec-Devon and CNOOC-Chesapeake deals were struck at a time when the U.S. shale gas industry was at its peak. Today, with gas prices declining and companies such as Chesapeake struggling financially, Chinese companies may be able to negotiate better terms, says CATF's Sung.

Technology isn't the only know-how the Chinese need, according to Albert Lin, CEO of Calgary, Canada-based EmberClear, an advanced energy project developer, which is working in the U.S. Marcellus shale site. China also wants to familiarize itself with the business case for running shale gas plants. By partnering with a U.S. company producing electricity from shale gas, China can learn about "the costs and time to construct the plant and the life cycle of that plant," says Lin. "If they understand how it works in the U.S., they can translate that to the home country." In addition, China can observe the costs and process of converting natural gas to higher-value fuels, such as diesel and gasoline, he adds.

As they study up on lessons from foreign partners, the Chinese also have to contend with domestic industry structure and pricing issues that might impede shale gas development. Observing the role of entrepreneurs in the success of the U.S. industry, the Chinese government wants to encourage private sector companies to jump in alongside the three big state-owned oil companies — Sinopec, CNOOC and China National Petroleum Corporation (CNPC). Because the Big Three already have lucrative franchises in more easily recoverable conventional gas, they "do not share the same enthusiasmas the government for rapidly developing shale gas in the short-term," says Erica Downs, a fellow at the Brookings Institution in Washington, D.C. To help spur the industry along, notes Kong of SAIS, "The Ministry of Land and Natural Resources is keen to encourage the participation of smaller players, such as private companies, in the hope that these companies will innovate."

Private sector companies have a strong incentive to gain traction against state-owned enterprises by winning their own exploration rights. "The three national oil companies dominate the gas industry, especially upstream," says Kong. "That makes it very difficult for private companies engaged in downstream businesses, because they can be squeezed." Among the private sector players to watch: Guanghui Energy, a natural gas pipeline operator in Xinjiang, says it wants to participate in the upcoming shale gas auctions, according to the newspaper China Daily.

But for private sector companies, pipeline access may become a big hurdle. State-owned CNPC owns 80% of the nation's gas pipelines, notes Kong. So far, the government has not implemented requirements that pipeline companies grant access to third parties.

In addition, to give companies greater incentive to invest in shale gas development, the government is examining its natural gas price controls. Rather than allowing the market to assign a higher value for relatively cleaner-burning shale gas over coal, for instance, says Kong, China's prices are pegged to income levels in different regions of the country, so that wealthier regions pay more and poorer regions less. In December, the National Development and Reform Commission of China (NDRC) announced pilot programs to liberalize wholesale and retail natural gas prices in Guangxi andGuangdong provinces. If these programs are successful, the government may expand the practice more widely.

For China, shale gas holds the same kind of promise as in the U.S. — energy independence and a cleaner energy future. For now, that is incentive enough to work through challenges presented by both nature and man.