The trend to build new satellite cities has been on the rise in China, but smaller municipal bodies often lack the financial resources and expertise to build out their towns. At the same time, increased regulations in the residential real estate sector have pushed developers to seek projects with mitigated regulatory risk. Urbanization of public-private partnership projects (PPP) have been the solution. They resolve immediate concerns on both sides. Long-term urban growth, however, depends on attracting economic investment to facilitate industrial upgrading, job creation, and quality of life improvements.

By developing one of the largest investment solicitation and service teams in the real estate industry, The China Fortune Land Development Co. (CFLD) moves beyond the traditional capital and construction value proposition associated with public-private partnerships. Its award-winning Gu’an New Industry City shows that service provisioning can be a developer’s path toward long-term financial returns on public projects. (This report in Chinese.) 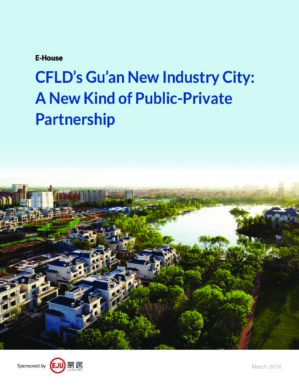